"You don't know me well enough to hate me." 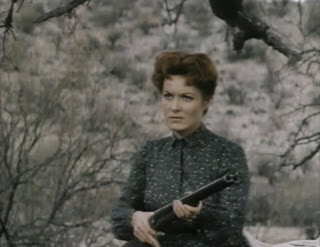 Background
When Brian Keith, star of Peckinpah's ground-breaking TV series 'The Westerner', was offered the lead role in 'The Deadly Companions' by producer Charles B. Fitzsimons, he accepted on the condition that Peckinpah be attached to the project as director. FitzSimons proved the first in a career-long coterie of producers with whom Peckinpah would clash. FitzSimons had cast his sister, Maureen O'Hara, as the romantic lead, and refused to let Peckinpah give her direction. He also insisted on final say regarding set-ups and vetoed Peckinpah's suggestion that the script was based on gimmicks and badly needed rewriting. Quite why FitzSimons didn't just direct the film himself is a mystery. Still, for all the compromises, 'The Deadly Companions' marked Peckinpah's move from the small screen to Cinemascope, so let's saddle up and see how auspicious or otherwise his much-maligned debut is. 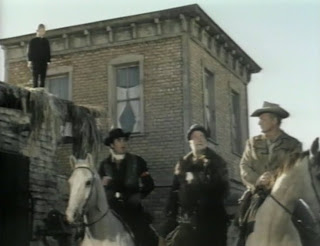 Synopsis
Yellowleg (Brian Keith) has spent years tracking down Turk (Chill Wills), the Confederate soldier who tried to take his scalp on a battlefield. Still conscious of the scars, Yellowleg refuses to take off his hat. Finding Turk on the verge of being hanged for a card cheat, Yellowleg rescues him and decides to bide his time before settling the score. In doing so, he finds himself riding along with Turk and his partner Billy (Steve Cochran) as they head to the town of Gila to pull off a bank robbery. They're not the only gang with designs on making an unscheduled withdrawal and in the ensuing exchange of shots, the son of local saloon hostess Kit (Maureen O'Hara) is mortally wounded. Kit, a pariah with the other townswomen who see her as no better than a whore and believe her son was born out of wedlock, determines to transport the boy's coffin over hostile, Apache-ridden territory to the ghost town of Serengo, where her husband is buried, and lay him to rest there. Overcome with guilt, Yellowleg accompanies her (to her initial chagrin). Turk and Billy tag along - Turk for no reason that makes any real sense, Billy with the intent of forcing himself on Kit. Yellowleg defends her honour and sends Billy packing. Turk soon departs, as well. Kit's feelings towards Yellowleg soften, but they still have a vindictive Apache warrior and the reappearance of Yellowleg's nemesis to contend with. 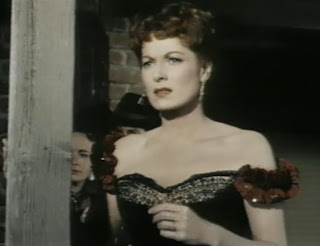 Analysis
When Peckinpah didn't like a script, a project or the source material thereof, he made no bones about it. He famously referred to Robert Ludlum's novel 'The Osterman Weekend' (the basis of his final film) as "a fifth-rate piece of shit" and declared that it was all he could do to give it some life. You could say exactly the same of 'The Deadly Companions', A.S. Fleischman's adaptation of his own novel.That the protagonist is called Yellowleg (after the army stripe on his trousers) is indication enough that the script deals in cyphers, not characters. Turk's name is no less gimmicky: it's short for Turkey, on account of the feather-like outfit he wears. Billy is the wiseacre faux tough guy straight out of central casting in a costume that borders on camp (I kept thinking about The Cat in his Riviera Kid persona in the 'Red Dwarf' episode "Horsemen of the Apocalypse"). The same tendency to cliche informs the film's narrative structure: Yellowleg's aim is affected by an old war wound (cliche alert!), resulting in the stray bullet that kills Kit's son - which is, in itself, nothing more than a crassly cynical plot device to send Yellowleg and Kit out into the desert together. It goes without saying, then, that the romantic subplot is cringe-worthy, particularly in its insistence that the audience accept that Kit, after much antagony towards Yellowleg ("you don't know me well enough to hate me," he retorts in the film's only memorable line), suddenly feels love for him - the man who, accidently or not, caused her child's death. Did I use the word "crass" a few sentences ago? Make that crass plus VAT. I've read that 'The Deadly Companions' impresses visually and shows Peckinpah's confident employment of Cinemascope and natural eye for compositions. Unfortunately, I watched it on the Weston-Wegram DVD release, a truly freakin' awful print that looks like a transfer from an old VHS copy taped off a badly-tuned TV that got fed through a meat grinder before being used as a doormat by the Coldstream Guards after a 50-mile route march through extremely muddy terrain. The colour depletion is so bad during the nocturnal scenes that it's borderline black-and-white. It's panned and scanned, too, which royally fucks any evidence of compositional brilliance. 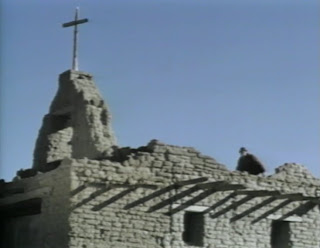 The performances vary: Keith and Wills are good. Cochran isn't bad given how little he has to work with. O'Hara is terrible. Gone, the fiesty likeability she brought to so many other roles. In its place, an inconsistent vacillation between the sullen and the histrionic. Which is a damn shame, since Kit is the only potentially interesting character that Fleishman's leaden prose even begins to conjure. Oh, and the saccharine ballad she contributes to the opening and closing credits is just as irksome.
All told, 'The Deadly Companions' has little to commend it. The film would be remembered solely as Peckinpah's first and otherwise dismissed as a routine western with a patchwork script and cardboard cut-out characters ... except for three scenes which, in hindsight, prove quintessentially Peckinpahesque and suggest Fitzsimons had let his guard drop (or sloped off for an extended comfort break) and ol' Sam had quickly taken advantage of the opportunity. The first is one of those barbed satirical moments that pepper much of the director's work. Arriving at Gila, Yellowleg and co. head straight for the saloon: it's nicely positioned so they can case out the bank, and they can slake their thirst. Briefly anyway. One shot of whisky later, the bartender's calling time and covering up the tastefully rendered nude painting behind the bar as the local preacher swans in and sets about declaiming the word of the Lord in the erstwhile house of vice. Kit attends the service and bristles at the barely-concealed outrage of her fellow parishioners; apparently they're unhappy that a saloon girl is present at a church service held in a saloon. Here we have the seeds of Knudsen's religious mania in 'Ride the High Country' and the sanctimonious citizenry who beleaguer Hildy in 'The Ballad of Cable Hogue'. 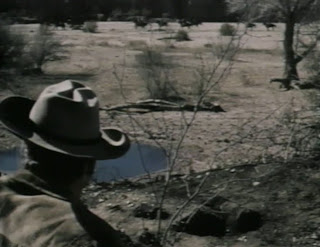 The second has Yellowleg and Kit witness what they think is an attack by Apaches on a stagecoach. Keeping out of sight and stealthily drawing nearer, they discover that the stage is one that has already been captured and stripped bare of fixings and luggage. The "passengers" are Apaches dressed in appropriated westerners clothes. They are drinking and whooping it up in a bizarre ritual that is both celebration of a successful robbery and re-enactment of same. Peckinpah's staging is brilliant, revealing elements of the scene by degrees in keeping with Yellowleg and Kit's perception as they get closer and closer to the action. As Paul Seydor points out in his book 'The Western Films: A Reconsideration', one of Peckinpah's directorial abilities was to "expand the scale and enrich the texture of his films, often introducing dizzyingly discordant elements, without breaking the continuity or violating the tone" - the stagecoach sequence is the first exegesis of this.
Finally, there is a scene where Yellowleg recounts to Kit the story of "a friend of mine" who spent five years tracking down a man he wanted to kill; only, when he found his enemy, to experience emptiness instead of catharsis - his five-year odyssey of hatred and animosity complete, he had nothing left to live for. (It becomes quickly and blatantly obvious that Yellowleg is talking about himself, but the scene loses no power for its metaphorical obviousness.) Peckinpah's direction of Keith achieves a regretful world-weariness that immediately establishes him as a precursor of Steve Judd, Pike Bishop and Pat Garrett - the first of Peckinpah's definitive, almost philosophical anti-heroes: a man who's outlived his time, looking back at the scarred life and bad decisions that have brought him this far and made him who he is.

Some directors start out with a bang, with complete control stylistically and thematically over their films, others have to slowly work their way up till they can get that level of control.

Still, even in their first films, most good directors always show a glimmer of promise or their true talent at some point in the film. For example, Abel Ferrara's first film, The Driller Killer, its raw, technically it might not be up to par, but through all the grimminess, you see Ferraras knack for telling shocking stories about real people. He would later go on to make The Bad Lieutenant, King of New York and other fine films.

Seems like this was the case with Peckinpah. He wasnt totally in control on this one, but he would slowly develop as a director, and prove himself enough to get it.

Good call with the Ferrara comparison. He's probably the closest contemporary has to someone of Peckinpah's determination to cleave to his own aesthetic and the mainstream be damned. I remember seeing Ferrara's 'Driller Killer' follow up, 'Ms 45' at a late night screening at an independent cinema about 15 years ago - it was gritty, uncompromising and about as low budget as you can get, but every frame of it was stamped with the signature of a director who knew exactly what story he wanted to tell.

The deficiencies of 'The Deadly Companions' - and I feel justified in saying this even as an unapologetic Peckinpah fan - are entirely due to its producer. And as flawed as the film is, it makes Peckinpah's follow up, 'Ride the High Country', that much more of an impressive achievement. I'll be blogging about 'Ride the High Country' on Saturday - in many ways it's the first real Peckinpah film.

Hey Neil. Great review of this film. I've never seen this one. I've heard a lot about it though. Most people have offered really negative reaction to it. That's probably a big reason I've never seen it. Even those that seem to like it give it more mixed reaction.

Thanks for your great comment at my blog. I appreciate it. It was really nice to hear from you. I hope you will comment more often. I definitely plan to do so here at your blog. I'm following your blog now.

Ms. 45, Ive only seen that remake with Milla Jovovich, I had no idea that Ferrara did the original one, until I did some research on him for my Driller Killer review.

Hey, since were talking Peckinpah here, and youd be the expert on the matter, why is it exactly that they say that Rob Zombies The Devils Rejects is influenced by Peckinpah in some ways? Thats what I heard anyway, dont know if theres any validity to those comments.

Keith - thanks for the comment, and for following my blog.

Francisco - yeah, I've read a few comments likening 'The Devil's Rejects' to Peckinpah as well. Personally, I think it's a tenuous connection. The best case you can make is to say that 'The Devil's Rejects' has a similar kind of zoned-out weirdness and punch-drunk atmosphere as 'Bring Me the Head of Alfredo Garcia'.