‘Ride the High Country’. Keen to establish a certain dynamic between John Davis Chandler, James Drury, L.Q. Jones, John Anderson and Warren Oates – the actors playing the Hammond brothers – Peckinpah instructs them to shun the rest of the cast and eat, drink and brawl together. The desired effect is achieved and Peckinpah re-uses the technique a decade later on ‘Straw Dogs’; the drunken brawling results in T.P. McKenna breaking his arm.

‘Major Dundee’. It’s the magic hour, the light is perfect and Peckinpah is crouched next to his DoP, lining up a crane shot. It’s a simple take: Heston, mounted, leads his cavalry down a hillside at a trot. Halfway down, Peckinpah calls "Cut" and roundly damns Heston for leading the horses down too slowly. According to David Weddle’s biography, the exchange goes something like this:
Peckinpah: That was shit. Jesus Christ, you came down too slow.
Heston: You told me to bring them down at a trot.
Peckinpah: The fuck I did, you goddamn liar.
Incensed at this slur on his good name, Heston – kitted out in full cavalry regalia – pulls his sword, spurs his horse and goes charging at Peckinpah. Director and DoP unite in cranking the crane out of the reach of Heston’s sabre as quickly as possible, sphincter muscles doubtless clenching tight as the cold steel arcs through the evening air beneath the seat of their pants.

‘The Wild Bunch’. The effects guy is pretty happy with the blood squibs he’s rigged up on some mannequins in the backlot. He invites Peckinpah to take a look. Peckinpah obliges. The blood squibs go off, leaving little blobs of red on the clothes the mannequins are dressed in. Peckinpah tells the effects guy that’s not the effect he wants. What effect does he want? Peckinpah unlocks the trunk of his car, pulls out a shotgun and pumps several rounds into the mannequins, blowing them halfway to hell. That effect, he says. 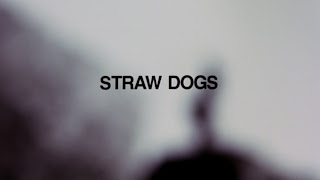 ‘Straw Dogs’. Peckinpah’s quite fond of "Butterfly Mornings", the love song in ‘The Ballad of Cable Hogue’ (made the previous year), and he decides to teach Ken Hutchison the words. While they’re blind drunk. In a storm. At Land’s End. At four in the morning. The production is shut down while Peckinpah recovers from pneumonia and producer Daniel Melnick holds out against the film’s star, Dustin Hoffman, who wants Peckinpah fired and replaced by Peter Yates, a man presumably not given over to impromptu vocal performances in the middle of a gale.

‘The Getaway’. Chalo Gonzalez, uncle to Peckinpah’s second wife, Begonia Palacios, is quoted in the Weddle biography as recalling that when he picked Sam up for the morning’s filming, his hands shook. A couple of vodka and tonics gets them steady again. Thereafter, Peckinpah observes with rigid discipline a no-drinking-till-5pm ethic. Sort of:
Peckinpah: Bring me a drink.
Gonzalez: Sam, it’s not five o’clock.
Peckinpah: What time is it in New York?
Gonzalez: Five thirty.
Peckinpah: Then bring me a goddamn drink.
(I feel that I should take a few moments here to back off from the levity of this piece and provide some context vis-a-vis Peckinpah’s use of alcohol. Or I could just link to a great article by Rich English over at Modern Drunkard and echo his conclusion that "the drugs ruined Sam Peckinpah, not the hooch". Cheers.)

‘Pat Garrett and Billy the Kid’. With the money-men at MGM penny-pinching from the start, Peckinpah’s request that an engineer be part of the crew in case the dusty Mexico locations prove detrimental to the cameras is nixed. As a result, a damaged flange goes unnoticed. Because the exposed film is being shipped to a processing plant, developed and shipped back, there’s a week’s delay between shooting a scene and viewing it in rushes. Settling back to watch the first set of rushes – still unaware at this point of the flange problem – Peckinpah becomes rather irate at the fact that shot after shot is out of focus. Berating his cameramen for what he perceives as their ineptitude, he strides across to the screen, unzips and urinates on it. As Gordon Dawson (quoted in Weddle) noted with admirable succinctness, "every night we watched dailies with this S-shaped piss stain on the screen."
‘Pat Garrett and Billy the Kid’ (again). Realising that reports of his on-set drinking are filtering back to Tinseltown, Peckinpah splurges for a full-page ad in the Hollywood Reporter to set the record straight. It has a picture of him on a hospital gurney, an IV lead attached to his arm which in turn is hooked up to a bottle of Johnny Walker. The caption reads "With reference to the rumours that on numerous occasions Sam Peckinpah has been carried off the set, taken with drink. This is to inform you that these rumours are totally unfounded. However, there have been some mornings ..."
Posted by Neil Fulwood at 12:33 PM

Hey there. How are you today? Thanks for your recent comment on my blog. I did have a great birthday. I hope you've been enjoying the weekend. Take care. Have a great week ahead. Cheers!

Man, Peckinpah was a bastard, but it makes for some great stories. I'd likely laugh even more if I didn't think that his general lifestyle, often fueled by drugs and booze, led him to an early grave. That always just kind of depresses me (although, I'm going to guess he wouldn't have had it any other way...damn, I need to read that biography).

Keith - good to hear to enjoyed your birthday. I had a good weekend, but I'm now sitting at work Monday morning regretting that I overdid the beer yesterday!

Scandy - I'll be sure to check out the Playboy photoset. I'd have a look at it now, but I'm guessing it's pretty much NSFW ...

Troy - yeah, these are great anecdotes and I had a lot of fun researching this piece. It seems that Peckinpah could be a real SOB to some people yet inspire ferocious loyalty in others. There's a great story that Warren Oates - who was badly ill on location in Mexico on 'Major Dundee' - was forbidden by his wife, on pain of divorce, to sign up 'The Wild Bunch' and go on location with Peckinpah again. Oates cheerfully went ahead and made the movie and got divorced.

hah, that's a pretty good story about Oates and his wife. Man, he certainly was dedication to Peckinpah, wasn't he? I bet they had some fun times on the set of THE WILD BUNCH.

Peckinpah gave Oates that scene in the wine vat with two buxom Mexican senoritas, so I'm guessing he and Oates had a shared love of women, liquor and wild times.

I'm raising a glass of decent single malt to the memory of both of 'em!