Sam Peckinpah in his own words 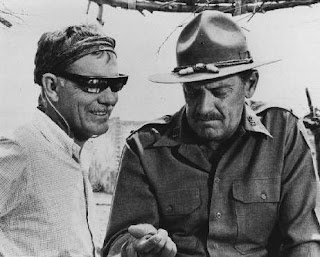 "I wasn't trying to make an epic. I was trying to tell a simple story about bad men in changing times. 'The Wild Bunch' is simply about what happens when killers go to Mexico. The strange thing is that you feel a great sense of loss when these killers reach the end of the line."
"I detest machines. The problem started when they discovered the wheel. You're not going to tell me the camera is a machine; it is the most marvellous piece of divinity ever created."
"The end of a picture is always the end of a life."
"I created 'The Westerner' because of anger - anger at never-miss sheriffs, always-right marshalls, whitewashed gunfighters ... anger at TV's quick-draw tin gods who stand behind a tin star or ten cents' worth of righteous anger and justify their skill and slaughter with a self-conscious grin or a minute's worth of bad philosophy."
"The point of the film ['The Wild Bunch'] is to take this facade of movie violence and open it up, get people involved in it so they are starting to go in the Hollywood, television, predictable reaction syndrome and then twist it so that it's not fun anymore, just a wave of sickness in the gut ... It's ugly, brutalizing and bloody fucking awful. It's not fun and games and cowboys and Indians. It's a terrible, ugly thing. And yet there's a certain response that you get from it, an excitement because we're all violent people."
"The whole underside of our society has always been violence and still is. Churches, laws - everybody seems to think that man is a noble savage. But he's only an animal. A meat-eating, talking animal. Recognize it. He also has grace and love and beauty. But don't say to me we're not violent."

"The western is a universal frame within which it's possible to comment on today."
"A writer has his pencil and paper and goes hungry only for time to use them. A director must start with this driving need to make his picture."
"Don't let anyone kid you, it's bloody murder learning how to direct."
"Despair is the only unforgivable sin, and it is always reaching for us."
"I regard everything with irony, including the face I see in the mirror when I wake up in the morning."
Posted by Neil Fulwood at 8:59 AM

You know Neal, I make my own films (just premiered my most recent masterpiece in a theater two weeks ago to good reviews and moderate box office success)(I made 400 bucks, LOL) but Peckinpahs quotes on this post are very inspirational.

I love how he speaks about the human condition, how he sees movies as life, and a way to express what we experience in life, which is what I like to do.

"Its bloody murder learning how to direct" Couldnt agree more, but its also highly rewarding, and enjoyable when the whole thing is over and you see the audience react.

Thanks for the comment, Francisco. Congratulations on showing your new film theatrically and turning a profit! Are any of your films available online? I'd be interested in knowing more about your work as a filmmaker.

Peckinpah's quotes are, as you say, inspiring. There's also a lot of truth and hard-won experience in what he said.

Well, Im just starting to get the hang of filmmaking, I never had any sort of formal film education. Im what you would call a self tought filmmaker.

Something closer to the Robert Rodriguez school of filmmaking. You know, keep the creative control, keep it indy, do what you love, do it fast and well.

My movies are silly, tongue in cheek zombie movies. I film them with a digital camera, I edit them on my computer and I show them in places. Ive made a couple of bucks this way, but nothing that would make me a millionaire.

Im still in the learning stage of filmmaking, I recognize this. But Ive learned a lot, thats why I identify a lot with the words of Peckinpah about learning to direct a film.

So the sequel, Cannabis Cannibal Exodus! What an experience! It was a bit more ambitious, still silly and tongue in cheak, but you know, still retaining that rawness, that improvisational element. I write the scripts, but allow my actors to improvise, which I love.

Hey Neil, whenever your in the mood for a silly, fun zombie movie with a post apocalyptic tone to it, let me know, Ill mail ya a copy!

Its nothing as serious as Tarkovsky or Herzog, but you know, most great filmmakers start with horror or comedy, so lets see. I feel like Im on the verge of making my best film yet with the next one, which I plan on making a bit more dramatic and serious. But still with some dark humor infused in it.

Well Neil, let me know, send me that adress and Ill send ya that copy!

Good luck to you, my friend. Nothing wrong with the Rodriguez school of filmmaking. With camera equipment as cheap as its ever been and the ability to edit on computer, there's no reason not to learn filmmaking by self-taught, hands-on experience.

I'll email you my address if you don't mind posting a copy of your film to the UK. Horror films with a comedic element can work really well: 'Shaun of the Dead', 'Slither', 'Tremors' and 'Severance' were all good fun.