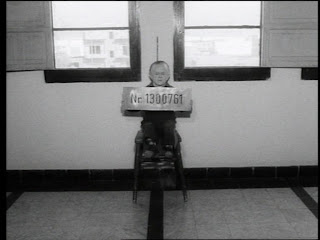 The late ’60s found Werner Herzog, just one feature film (‘Signs of Life’) and a handful of shorts into his prolific career, in Africa where, along with filming the commissioned 45-minute film ‘The Flying Doctors of East Africa’, he start shooting footage for what would become ‘Fata Morgana’. His original concept – which he returned to nearly forty years later with ‘The Wild Blue Yonder’ – was to structure the film as a document made by alien visitors who discover that Earth is a ruined landscape.

“… I decided to scrap this idea. The mirages that had taken hold of me and the visionary aspects of the desert landscape were so much more powerful that any single idea for the film I had previously had, so I junked the story, opened my eyes and ears, and just filmed the mirages of the desert.”

If this recollection sounds transcendental, the reality was quite different. Herzog, renowned for making films of visionary genius in the most inhospitable conditions imaginable, had a harder time than usual. The man who manoeuvred his way through military blockades during ‘Fitzcarraldo’ on a forged permit document and a seemingly inexhaustible supply of chutzpah didn’t fare so well on ‘Fata Morgana’. He and his small crew found themselves arrested on several occasions, incarcerated in overcrowded cells, mistreated. It wasn’t in the happiest frame of mind that he started work on his next picture ‘Even Dwarfs Started Small’*.

“When I returned to Lanzarote to start shooting ‘Even Dwarfs Started Small’ I was full of bitterness, affected by sickness and the film became a more radical film than I had originally planned. ‘Aguirre’ looks like kindergarten against this one. Somehow I had the feeling that if Goya and Hieronymus Bosch had the guts to do their gloomiest stuff, why shouldn’t I?”

Radical, definitely. ‘Even Dwarfs Started Small’ is a film that divided audiences of the time, particularly in Germany where Herzog was denounced as a fascist. Released during a period of widespread revolts and riots, Herzog’s critics claimed that the film satirised the revolutionary spirit instead of celebrating it. 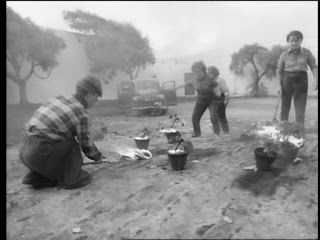 “I told these agitators that the film had absolutely nothing to do with the 1968 movements, that they were blinded by zealousness and that if they looked at the film twenty five years down the line they might just see a more truthful representation of what happened in 1968 than in most other films.”

Read the above sentence a couple of times. There’s something of a dichotomy in that statement. Herzog is saying that ‘Even Dwarfs Started Small’ is not about the political and social chaos of 1968 – by extension, therefore, it is neither an allegory nor an overtly political work – however, viewed in retrospect it provides a more accurate commentary on the social and political climate it was born out of than many other, explicitly political, films of the time.

Or, I guess, you could just look at it as a movie about some dwarfs who go apeshit and revel in total anarchy. The nominal plot – the film offers little in the way of narrative; it’s more a collage of increasingly bizarre scenes – has Hombre (Helmut Döring) first observe and then participate in a destructive and cathartic day of rebellion while a nameless bureaucrat (Pepi Hermine) tries to cling on to his seat of power while impotently calling for order. The location is some kind of institute or facility. It doesn’t matter which. Take it as a microcosm: for the Germany of 1968, for the Britain of 1977, for the world of today. Works just as well in each case.

Works equally well – nightmarishly so, in fact – if you take everything literally. That way you’ve got only one of two films (to the best of my knowledge) that feature an all-dwarf case – the other being Sam Newfield’s 1938 western ‘The Terror of Tiny Town’ – and certainly the only film whose all-dwarf cast gleefully commit acts of arson and vandalism, throw themselves at or on top of moving vehicles, flick through pornographic magazines, stage a mock religious ceremony with a crucified monkey and laugh themselves hoarse at a camel as it takes a dump. 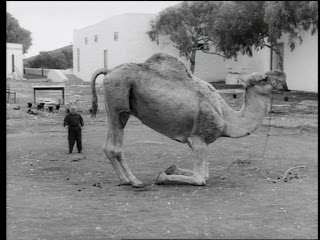 “… a rumour went round that to get the dromedary on its knees so long I cut its sinews. Very quickly I learned … that you can fight a rumour only with an even wilder rumour. So immediately I issued a statement that actually I had nailed the dromedary to the ground.”
‘Even Dwarfs Started Small’ is one fucked-up piece of cinema, even by Herzog’s standards. It’s a joyous hymn to irresponsibility, a slap in the face to audience expectations and a fuck-you two decades before the term was even coined to political correctness. If Alejandro Jodorowsky had made ‘A Clockwork Orange’ from a script by Salvador Dali, the end result couldn’t have been any weirder.

* ‘Even Dwarfs Started Small’ was released before ‘Fata Morgana’ as Herzog was initially hesitant about whether ‘Fata Morgana’ would find an audience.

(All quotes in italics are taken from Herzog on Herzog, edited by Paul Cronin.)