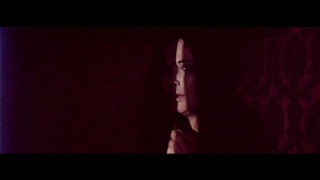 The third of Dario Argento’s so called "animal trilogy", ‘Four Flies on Grey Velvet’ has virtually bugger all to do with its predecessors except for sharing a bit of wonky science with ‘Cat o’ Nine Tails’. Even calling it the "animal trilogy" is a misnomer: ‘The Bird with the Crystal Plumage’ and ‘Four Flies on Grey Velvet’ reference birds and insects respectively, while a line of Karl Malden’s dialogue pinpoints the title of ‘Cat o’ Nine Tails’ as "the old naval whip".

The divergence of ‘Four Flies on Grey Velvet’ from Argento’s first two films is important. In ‘The Bird with the Crystal Plumage’, Sam Dalmas (Tony Musante) is powerless to prevent a murder and haunted by the certainty that he saw something important, some clue, something he can’t quite put his finger on. In ‘Cat o’ Nine Tails’, Franco Arno (Karl Malden) overhears someone talking about blackmail – and possibly murder – but Franco is blind and, unable to identify them, relies on the assistance of reporter Carlo Giordani (James Franciscus).

Dalmas and Arno are bystanders who turn amateur sleuth when they find themselves in the wrong place at the wrong time and the police prove incompetent. Such tropes are staples of gialli. Roberto Tobias (Michael Brandon) in ‘Four Flies on Grey Velvet’, however, doesn’t conform to the archetype. As Maitland McDonagh puts in it ‘Broken Mirrors, Broken Minds’, "he’s a transitional protagonist who bridges the gap between the relative innocents – Dalmas, Arno, Giordani – and the relatively guilty – Marc Daly in ‘Deep Red’ and, most spectacularly, Peter Neal in ‘Tenebrae’."

Also, ‘Four Flies on Grey Velvet’ is that rare example of a giallo where the police – incompetent or not – are entirely absent. Tobias has good reason not to turn to them. The drummer in a pretty average rock band, Tobias gets the feeling he’s being followed. In short order, he goes from paranoid to just plain annoyed. Turning the tables by following the follower, Tobias confronts the man in a deserted theatre. A knife is pulled. They struggle. The man plunges from the stage. As Tobias, confused and scared, stands holding the bloody knife, the beam of a stage light hits him and a masked figure in one of the balconies raises a camera and snaps a series of incriminating pictures. 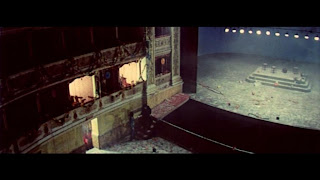 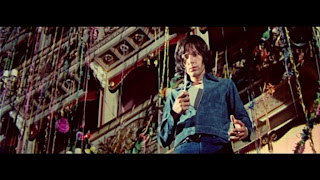 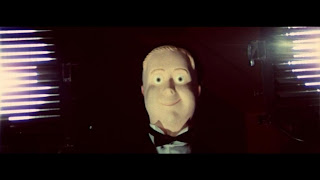 Pictures which turn up in the mail. Pictures which are left at Tobias’s house after a party. It’s as if, he confides to his drop-out friend Godfrey (Bud Spencer), he’s being blackmailed. Yet there are no demands for money. When his tormentor breaks into the drummer’s house one night and gets the drop on him, Tobias intuits a darker motive: the masked man wants to kill him. Here ‘Four Flies on Grey Velvet’ makes another departure from the giallo rulebook: Tobias doesn’t play amateur sleuth in order to unravel the mystery; nor is he left to puzzle the meaning of an important but hitherto overlooked clue. The only thing Tobias fixates on is a recurring dream about someone getting beheaded. 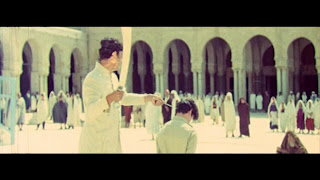 Godfrey (God for short) recommends a private eye, the camp and generally incompetent Arrosio (Jean-Pierre Marielle), a man who has yet to solve a single case but is convinced that, by the law of averages, he’s bound to solve this one. It’s Arrosio who does all of the sleuthing in ‘Four Flies on Grey Velvet’, and he only enters the proceedings round about the halfway mark. So what does Tobias do during all of this? He sends his highly strung wife Nina (Mimsy Farmer) away, dallies with her foxy cousin Dalia (Francine Racette), ignores all suggestions that he leave town or tell the police everything and, finally, sits it out in his apartment, gun in hand, waiting for his nemesis to turn up.
All told, Tobias is a pretty shabby hero, and the people who surround him are no less so. His relationship with Nina is falling apart. He seems distant from his bandmates. His only real friends are vagrants. His housekeeper figures out early on who’s behind the mask but rather than take the information to Tobias or to the police enacts a blackmail scam which brutally backfires. Neither Tobias’s victim or his assailant are what they seem. Gender concepts are skewered. An element of troilism both sexual and psychological is at work.
‘Four Flies on Grey Velvet’ is one of Argento’s least seen works, thanks to its long-standing unavailability. I first saw it as a horrible, washed-out, panned-and-scanned pirate video. A few years ago I stumped up for a German DVD on import; the assemblage was a complete version, but taken from two sources which accounted for intermittent blips in quality. It’s dark and murky film even in a decent print, with arguably its creepiest sequence – the housekeeper waiting for the blackmail money in a gradually emptying public park as dusk draws on – played out as a symphony of shadows. 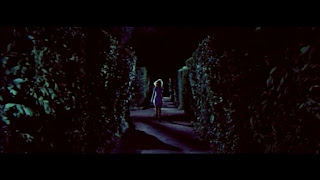 Many of the key scenes take place at night or in low-lit places – the confrontation in the theatre; Tobias menaced in his own home; Dalia hiding from an unseen intruder; Tobias’s stand-off with the killer; the abrupt and ironic coda on which the film closes – with only Tobias’s recurring dream of the beheading providing a hard glare of light.
Even the occasional touches of humour are cynical and nasty: Tobias surreptitiously meeting Godfrey at an undertakers’ convention; Arrosio, the butt of homophobic stereotyping from the outset, finally cracking a case when it’s too late to savour his victory; the Tobias’s dream/killer’s fate juxtaposition which ladles on the tombstone humour with a gravedigger’s shovel. McDonagh’s right – Tobias provides a link from the beleaguered heroes of the first two films to the compromised and complicit protagonists of Argento’s later work – but in its concept and structure (if not quite achieving the same bravura aestheric) ‘Four Flies on Grey Velvet’ is every bit as cynical and gut-wrenching as ‘Deep Red’ or ‘Tenebrae’.
Posted by Neil Fulwood at 9:15 AM

Thanks for sharing this with us. This is actually one of his films that I've never seen for some reason.

This is kind of an odd bird in Argento's oeuvre, no?

Overall, it's a bit underwhelming, but some things I loved about this film would be the awesome credit sequence, the park scene (which Argento seemed to reuse in TENEBRE when John Saxon is killed), Mimsy Farmer (I just have a thing for her between this and THE PERFUME OF THE LADY IN BLACK), and the total wackiness of the pseudoscience that reveals the "four flies".

Keith - it's not been widely available for quite a while. My copy (which the screenshots are taken from) is a German DVD assembled from two sources (some of the picture quality is shoddy to say the least!) that I paid over the odds for as an import just so I could see the film.

Troy - I know what you mean. I was underwhelmed by 'Four Flies' first time I saw it. It took at least three viewings before the film started to grow on me, and even now it wouldn't be in my top five choices if I fancied watching an Argento film of an evening.

I'm in the same boat as Keith. I believe this and CAT are the only Argento Gialli that I have yet to see. I'm dying to check it out, though. Keep putting it off for an inevitable Argento-a-thon, which may happen in October. Nice write-up, Neil. Dig the screen shots, too.