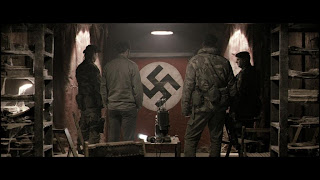 Yay! After the disappointment of ‘Dead Snow’, Steve Barker’s ‘Outpost’ is a Nazi zombie movie which actually does something with the concept of Nazi zombies. It keeps the zombies more or less offscreen for a good two-thirds of the movie, throws in a science vs. the supernatural subtext that explains the manifestations, and delivers the gore when it needs to but never resorts to blood and guts for their own sake. It’s easily the best group-of-soldiers-meet-something-evil movie this side of Neil Marshall’s ‘Dog Soldiers’. Unlike ‘Dog Soldiers’, though, there’s barely a trace of humour in ‘Outpost’. Barker plays it straight and delivers a nice line in slow-burn tension.

The film opens in an unnamed Eastern European location. The territory is politically unstable with control “switching between government and insurgents on a weekly basis”. The countryside is rumoured to be rife with bandits, patrols and people who, as a general rule, would shoot you rather than look at you. It’s here that the mysterious Hunt (Julian Wadham), who represents a group he refers to only as “the financiers”, engages hard-bitten mercenary DC (Ray Stevenson) and his right-hand-man Prior (Richard Brake) to put together a team and guarantee his safe passage to a remote site. 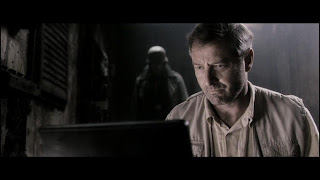 They arrive at a World War II bunker and a firefight with unseen assailants immediately results in one of their number injured and the rest of them pinned down. Inside the bunker, they discover Nazi paraphernalia, a strange-looking machine that Hunt takes an obsessive interest in, and a room full of corpses … No, wait; one of them’s still breathing.
Barker gets his team assembled and into the field within ten minutes. They’re at the bunker within another ten. From hereon in, and with the exception of a couple of engagements with their unseen foe above ground, he relegates most of the action to the shadowy corridors and dusty rooms of the bunker. The first indications of supernatural goings-on are effective for not being over-egged. Barker reveals the full implications of the Nazi zombies’ capabilities gradually, establishing the science subplot in tandem. 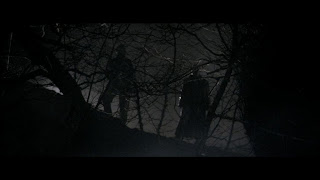 Tensions exacerbate amongst the mercenaries. A revelation courtesy of a Nazi propaganda film reel scored to Wagner* puts things in context. We’re nearly an hour into an 86 minute film before the first of the group discovers how little the Geneva Convention matters to undead National Socialists. By this point, Barker’s ramped up the tension and created an atmosphere you could cut with a knife.
‘Outpost’ has a few flaws – the dialogue is often blandly utilitarian and heavy on testosterone; apart from Hunt, DC and Prior, the characters are cardboard cut-outs; the ending seems slightly rushed; and the alternative ending on the DVD’s special features is conceptually more interesting than the rather obvious coda the filmmakers went for in the theatrical cut – but even if ‘Outpost’, in the final analysis, is a good film rather than a great one, it’s still that rarest of beasts: a pretty damn good Nazi zombie film.

*One of two perfectly chosen classical pieces on the soundtrack. The other is the best use of Beethoven’s Ninth since ‘A Clockwork Orange’ (Prior’s “I fuckin’ love culture” line is priceless).
Posted by Neil Fulwood at 1:30 AM

Amongst Nazi Zombie movies, this one is good,and thats a rare thing!

I enjoyed that sci-fi angle it has when we finally get to know whats really going on. And I like how some of the mercenaries got very existencial. Constantly questioning themselves about the idea of god.

The nazi zombies are kept in shadows for too long though, I wish we'd gotten a better look at them is my only real complaint.

thanks for the review. i really want to see the movie now. i love brain-twisting movies such as this one. :)

Francisco - agreed: it's the sci-fi angle that really makes it. I love the way the writers tie in the experiments in the bunker to Einstein's unified field theory and the Philadelphia experiment. It makes the suspension of disbelief so much easier to handle. It also gives the film a wider context than most zombie films. In fact, for the first half I wasn't sure if I was watching a ghost story, a psychological thriller or a zombie movie. It's an effective and assured film that keeps you guessing to that extent.

Good call in isolating the decision to keep the zombies offscreen so long as the potential weak spot. I was getting slightly agitated, just past the hour mark, knowing that the film had only about twenty minutes left, that things might get wrapped up too quickly or unsatisfactorily.

Still, of the admittedly few Nazi zombie films I've seen so far, this is definitely one of the best.

Vinda- hi, thanks for visiting my blog and thanks for commenting. This film definitely keeps you guessing and makes you think. I'd definitely recommend. If you get round to seeing it, please leave me another comment and let me know what you think; I love you here your thoughts on it.

I will take SHOCK WAVES over this one any day, but until I see DEAD SNOW (the fact that I keep putting it off seems to be a running joke that no one else but me gets) I obviously can't say what I think the best Nazi zombie movie is. If that's the only incentive of seeing DEAD SNOW, then I can't say I'm in a rush to get around to it. As far as OUTPOST, well... you can read my review here: http://deathrattlethirteen.blogspot.com/2010/02/outpost-2008.html