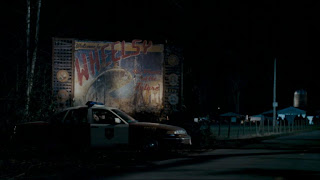 Welcome to Wheelsy. Let’s take a walk down Main Street, past R.J. MacReady’s funeral parlour and Max Renn’s video store. We could drop by Henenlotter’s bar for a drink, or grab a bite at Meg Penny’s diner.

It’s in-jokes like these, all unobtrusively slotted into the background, that are the cleverest thing about ‘Slithers’. The plot – equally derived from a thousand other movies – less so. A comet falls in the woods behind the town. Successful local businessman (and boorish lout) Grant Grant (Michael Rooker), hitting the bar after his trophy wife Starla (Elizabeth Banks) spurns his advances, picks up an old flame and they head home canoodling through the woods. Grant stumbles upon an alien pod which cracks open and infects him. He becomes withdrawn, starts doing something secretive in the basement and develops a craving for meat. He buys it to start with, in large amounts, then progresses to snacking on neighbourhood dogs and even coyotes. 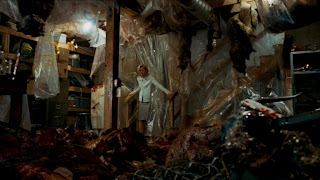 Starla becomes suspicious, and when Grant goes beserk and attacks her she turns to laconic town sheriff Bill Pardy (Nathan Fillian) for help. Bill’s been carrying a torch for Starla for a while.

Does all of this sound familiar? ‘Slithers’ does nothing new – and deliberately so. It draws on audience familiarity with just about every small town horror movie trope in the book. Its loathsome slug-like monsters are like the creatures in ‘Tremors’ only small; they enter the bodies of their prey through the mouth a la ‘Night of the Creeps’; one of them glides through a bathtub like Freddy Krueger’s glove. 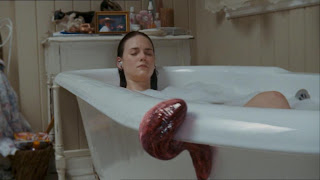 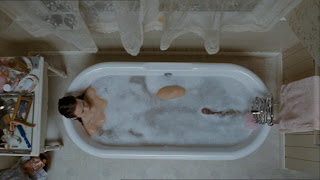 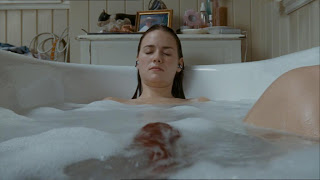 Unfortunately, ‘Slithers’ is very hit-and-miss in terms of how well it uses its borrowings. When the town is under siege by the slugs and the good folk of Wheelsy are turning into lumbering zombies – and when, as a result, Bill emerges as the hero of the day, the hugely likeable Fillion taking centre stage – ‘Slither’ fires on all cylinders. The pace is fast, the set-pieces are well executed and the humour quotient is acceptable.
It’s the first third that’s never quite worked for me. Focusing almost solely on Grant, it’s a humourless and surprisingly nasty-minded stretch of film, particularly the scene where Grant forcibly infects his old flame – it’s staged very much like a rape. Perhaps because of Rooker’s intense physicality, Grant comes across as genuinely threatening, monstrous even before his transformation is complete. The shift in tone when Grant goes to ground and Bill and his hastily convened posse try to track him down – writer/director James Gunn cutting loose with the comedy – is significantly less than seamless. In fact, the film lurches and it takes a while to re-establish a tone. 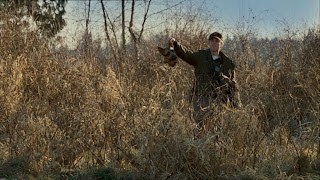 ‘Slither’ follows in the footsteps of the likes of ‘Tremors’, ‘Arachnophobia’ and ‘Eight Legged Freaks’ – all of which manage to have their cake and eat it, being affable and entertaining films which nonetheless deliver suspenseful scenes and enough of an ick factor to satisfy the horror fan – but never quite lives up to them. The posters trumpeted it as “the best horror comedy since ‘Shaun of the Dead’.” It’s a decent 90-minute timewaster with enough belly-laughs to make it worth your while, but it’s definitely not in the ‘Shaun of the Dead’ league.
It does, however, end with a C&W ballad over the end credits called ‘Baby I Love You, Just Leave Me the Fuck Alone’. Which is nice.
Posted by Neil Fulwood at 7:26 AM

Gunn never really shook off his Troma training. Which is good and bad. At the very least it makes his films unpredictable.

Nathan Fillion owns this film and as you rightly point out, the best moments are when he's on screen. I swear, he has a real shot at usurping Bruce Campbell as B-movie god if he really wants to go for it.

I did thoroughly enjoy all the in-jokes to other horror films both subtle and obvious. It's a fun film to be sure.

Bryce - I've already got the next Something For The Weekend planned, but I'll definitely be featuring the lovely Elizabeth Banks before much longer.

J.D. - good call on the Fillian/Campbell comparison. His turns in this and 'Serenity' are the making of both films.

Night of the Creeps..my god I had forgotten about that one!!..I was 17 when I saw that at the flicks and have always loved it.
Yeah slither is somewhat of arip off. It is so dumb though it is kind of good!