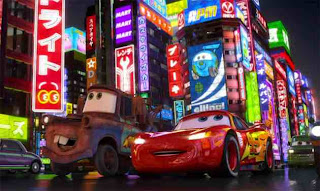 When ‘Cars’ opened in 2006, the critics were lukewarm. The main bone of contention seemed to be that it wasn’t as good as ‘The Incredibles’. Which it wasn’t. That said, I preferred it to ‘A Bug’s Life’ and ‘Finding Nemo’, the brilliance of which is punctured, in scene after scene, by the irritant that is Dory (the second most annoying character in the Pixar canon; we’ll come to the first in a minute).

‘Cars’, ultimately, is a decent film with a terrific ending. Aesthetically, its anthropomorphism of human traits, personalities and nationalities into automobiles throws up illogicalities left, right and centre – as Bryce muses in his excellent review on Things That Don’t Suck, “I wouldn’t be the first to wonder if there are not piles of human corpses just offscreen” – but once one rationalizes this in the context of John Lasseter’s love of ’50s Americana, a time as much defined by the fins, gleaming chrome and whitewall tyres of its cars as by its music or its fashions, then one can settle back and enjoy a homely tale of a race car who learns to slow down. ‘Cars’ has plenty to offer: incredibly beautiful visuals, some great supporting characters (the banter between Sarge, a 1940s US Army jeep, and Fillmore, a hippie VW Microbus, is priceless), a finale that tells the kids that, actually, winning isn’t all that important, and an end-credits sequence that transposes the film’s anthropomorphism to Pixar’s previous outings in a montage that’s arguably wittier and more inventive than anything else in ‘Cars’.

I can understand the hesitation to embrace ‘Cars’ as wholly as the ‘Toy Story’ trilogy, ‘The Incredibles’ or ‘Ratatouille’ – but it’s still a film I have a lot of time for.

When ‘Cars 2’ opened last month, it was to the absolute all-time worst reviews in Pixar’s history. Which is kind of understandable given that a whole lot of folks were ambivalent about the first one. The question of why Lasseter was so committed to the project when, say, ‘The Incredibles 2’ or even ‘Ratatouille Part Deux: The Masterchef Years’ would have been a far safer option.

But commit to it Lasseter did and, for all that I enjoyed the manic energy of the film’s last half hour, it was in many ways a bad decision. Don’t get me wrong: I wish I could thumb my nose at the naysayers and declare ‘Cars 2’ a jewel in Pixar’s crown; I wish that all the things I enjoyed about it (Pixar just keep raising the bar visually; there are some inspired in-jokes; it’s a U-rated film that has a “your mother” moment) outweighed the faults. Hell, I’d consider it acceptable if the fun and flaws simply balanced each other out on the scales of critical analysis.

Unfortunately, there are two things about ‘Cars 2’ – and they are inextricably interlinked – that present an almost insurmountable problem:

Or, tying those to together in one unholy bundle the way the script does: it’s a Bond movie with talking cars in which Mater gets his secret agent funk on.

I could end this review right here and I think we’d all be au fait as to what’s wrong with this movie. 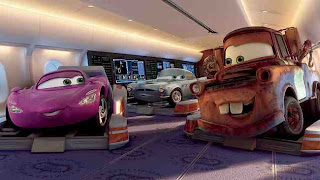 For the defence, the fact that it’s a Bond movie doesn’t bother me all that much. Bond movies lend themselves well to satire, particularly the Roger Moore entries which about one micrometer from being cartoons anyway. The mild controversy about the amount of shoot-outs doesn’t bother me either: there were men with guns providing a threat to the protagonists of ‘The Incredibles’ and nobody whinged about that. It does bother me that ‘The Incredibles’ has already ticked the Pixar-spoofs-Bond box and that the material mined by ‘Cars 2’ would have worked a lot better as an ‘Incredibles’ sequel. (Seriously, Mr Lasseter: ‘Incredibles 2’, any time you’re ready. I really want to know what the deal is with the Underminer.)

It also bothers me that the set-pieces ram home the illogicalities of the anthropomorphism more gratingly than anything in the original. Talking cars in a roadside diner I can just about get my head round. Talking cars getting fitted with new tyres by another talking car assisted by a talking forklift truck that uses its blades to operate air-tools …. okayyyyyy. Talking fucking cars on a fucking oil rig being spied on by another talking car which is balanced on a fucking tightrope - that’s pushing it!

The overall aesthetic of ’50s small town America was the key to the first film. It’s what allows everything else to cohere. ‘Cars’ only functions as movie because of Radiator Springs. Location defines many films; with ‘Cars’, it permits the film. ‘Cars 2’ removes the action from Radiator Springs, and in doing so replaces the peaceable and harmonious values of its predecessor with raucous, over the top action. Yes, it’s called ‘Cars 2’; yes, it features Lightning McQueen and Tow Mater and Sarge and Fillmore and the rest of the gang (except for Paul Newman’s Hornet Hudson, whose absence is, credit where due, sensitively acknowledged in an early scene); yes, they’re all demonstrably the same characters. But ‘Cars 2’ exists in an entirely different fictive universe to ‘Cars’ and it’s this as much as anything that makes it such an awkward, unsatisfying viewing experience.

The second problem, as mentioned several hundred words ago, is Mater.

I will not speak of Mater.

I will give the nod to the entertaining and likeable new characters – the suave Finn McMissile (voiced by Michael Caine) and the elegant, albeit inelegantly named Holly Shiftwell (Emily Mortimer). I will mention the nifty portrayal of the villains (the monocled Professor Zundapp is spot on). I will high-five anybody involved in the production for the last act piss-take of the Royal Family and the unmitigated chaos the protagonists wreak through the centre of London.

But I will not speak of Mater. I owe it to my blood pressure not to.

Well realised review Neil! And I'm with you as I like Cars, both of them. I seriously don't buy into this idea that cars can't be anthromophised and yet toys, rats, fish, etc, can!! Cars are a love of mine so as an idea this franchise appeals to me no end!
That for me is the love I have of animation comes from, just the ability to make the mundane into a story line and get away with it if you want to but into it. Really, how can't you buy into something a bit silly once in a while?! I mean who really gives a shit if a male cow has udders as in the maligned Farmyard?!
With Cars it seems it is a world wide obligation to just hate it for the hell of it, and in all honesty I have yet to read a really valid review that says why they are so bad. Sure they aren't Pixar's best but where does all that hatred come from??
As to Mater I know where you are coming from. Even though he didn't annoy me personally it is exactly how I felt about Po in Kungfu Panda 2. He seriously pissed me off as his charm of the first movie was replaced by a fat prat called Jack Black and his smart arse approach to humour. Black destroyed Po as a lovable character, and turned into a smart arsed pain in the posterior. I wanted to grab that panda, stuff him, and mount him above my fireplace!! Just as I'm sure you wanted to shove Mater into the nearest car crusher!

The most frustrating thing about the film to me was it was so easy to see how it could have been a perfectly fine piece of Kid's entertainment had the M-ter element been toned down a good 80%.