SUMMER OF SATAN: Asylum of Satan 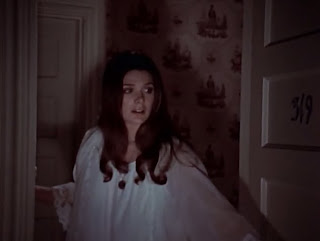 There’s a scene about half an hour into ‘Asylum of Satan’ that’s been done a million times before – a big fat movie cliché, but something that’s generally effective if staged by a filmmaker with even the vaguest sliver of talent. This is the set-up: the heroine, Lucina (Carla Borelli) wakes up after being hospitalized and finds herself in an asylum. The doctor is not her usual practitioner. The nurses and orderlies are vaguely threatening. She’s denied contact with the outside world. Her fiancé, Chris (Nick Jolley), sets out to find her. In the scene in question, he visits the asylum but is turned away. Lucina appears at an upstairs window as he shuffles morosely back to his car and drives away. Lucina hammers on the window, screaming her head off, desperately trying to attract his attention. But the glazing is evidently soundproof and her cries are mute.

The key phrase in the above paragraph was “if staged by a filmmaker with even the vaguest sliver of talent”. William Girdler, who made his debut with ‘Asylum of Satan’ at just 24 (and went on to make such schlock staples as ‘Three on a Meathook’, ‘Sheba Baby’ and ‘Day of the Animals’ before dying in a helicopter accident, at the age of 30, having wrapped his swansong ‘The Manitou’), demonstrates very little filmmaking capacity. Instead of positioning his lead actress behind an authentically heavy duty double-glazed window and equally authentically yell her head without the vaguest sound escaping – or, failing this, simply erase the sound for this scene – it’s painfully obvious that Borelli is hoarsely whispering while trying to convince that she’s shouting. The result is one of the most hilarious pieces of bad acting outside of an Ed Wood production. Moreover, it’s plain to see that Borelli isn’t actually beating her fists against the window but stopping short of the actual glass (the girl’s no Marcel Marceau!) – and at one point she fails to pull her punch, strikes the glass for real and the windowframe shudders fit to break.

Awful, awful, awful stuff. One viewing of the rushes should have been enough to tell Girdler that the scene simply didn’t work. But rather than omit it or edit around the deficiencies, he restages it – at excruciating length – twice more.

A few days ago, posting on Facebook, I wondered how I could possibly write a 400 word review of ‘Asylum of Satan’ without simply repeating the phrase “abject piece of shit” one hundred times. Astoundingly, according to the word count, I’m already there simply by writing about one scene. 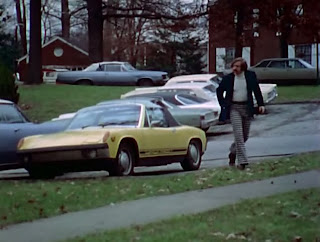 … goes to see Lucina’s doctor, who says that he was overruled in transferring Lucina to the asylum when her father insisted on the arrangements. Chris says something along the lines of, “But her father’s been dead twelve years,” and hastens off to the nearest precinct to get the cops involved. The lackadaisical detective he talks to doesn’t buy his story, and asks him what evidence he has. Instead of saying, “The transfer was arranged by a guy who’s been dead twelve years – there’s your suspicious circumstances”, he hems and haws and mumbles something about the asylum not feeling right, at which point the detective is about ready to kick him out of his office. I face-palmed the whole scene thinking: dude, you have incontrovertible evidence – what the fuck!?!

“What the fuck” is a question I kept repeating throughout the film, from the Scooby-Doo narrative developments to the bargain basement set-pieces in which Lucina’s fellow “patients” are variously bumped off (the deaths are later revealed as sacrifices, but they all occur in a solitary, non-ceremonial context) to the incredibly badly stage dream sequences to the finale, which features the most unthreatening vision of the Antichrist ever committed to celluloid. 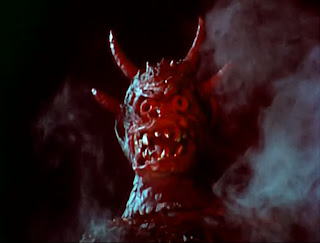 ‘Asylum of Satan’ is a shoddy, unscary, half-arsed piece of work from start to finish, so tediously padded in places that its meagre 78 minutes seems twice as long. Script and direction battle it out for title of “most incompetent”. The acting is so bad that I can only assume the jury who award the Razzies watch it every year as their yardstick against which to determine the truly fuck-awful as opposed to the merely crap.

I have now reached over 700 words. I should have stopped at 666. At least the film would have had some Satanic connotation.

Sounds like a classic (I had a good laugh at your description of the "window" scene -- love stuff like that in these godawful movies).

That monster/antichrist thing is amazing. It looks like what a 12-year old might make in his art class after having watched NIGHT OF THE DEMON.

What makes the window scene so wonderfully awful is how long it does on for and how desperate Borelli's gurning becomes.

The monster mask honestly looked like they'd had a five-year old in to do the FX ... and skimped on how much Play-Doh they allowed him!