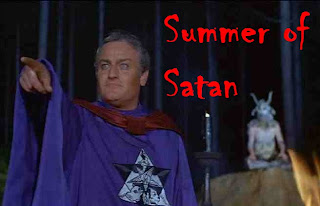 Last year, in a moment of midsummer madness, I threw open a poll on the sidebar and asked the good and great (ie. my readers) what they’d like to see in terms of a big 2011 retrospective on The Agitation of the Mind. There were five alliterative options:

Summer of Song: anything with a musical connotation, from classic Hollywood musicals to biopics of composers or musicians and documentaries about same.

Summer of Sin: anything seedy, sexy, sultry or seductive; anything torrid, tempting, tantilizing or titillating; anything nasty, naughty, nubile or nefarious; anything lustful, lewd, licentious or lascivious; anything rude, rampant, rapacious or recalcitrant. (Mucky movies, in other words.)

Summer of Sarcasm: satire of the most scathing ilk; anything that royally and unrepentantly rips the piss.

Summer of Sci-Fi: the clue’s in the title.

Summer of Satan: anything dark, devilish and diabolical. Anything with Satan in the title or ol’ Scratch as a character, icon or narrative influence.

When the votes were tallied at the end of the year, Summer of Satan was the outright winner, with Summer of Sci-Fi. Poor old Summer of Song was the Billy-no-mates of the bunch, probably because the thought of unleashing yours truly on the ‘High School Musical’ franchise was more than anybody’s sanity could cope with.

So, with Shots on the Blog back inside and doing time till next year, and no obstructions till 13 for Halloween in October and the second (possibly annual) Winter of Discontent in November and December, ladies and gentleman, please be upstanding for the Prince of Darkness, the Adversary, the Antichrist (Lucifer to his pals): let’s have a great big round of Agitation applause for the Devil.

Over the next three months – although, if I can take a moment to reassure any readers of a nervous disposition, Summer of Satan won’t be the entire focus of this period – I’ll be looking at anything, as previously stated, with “Devil” or “Satan” in the title, or where the Bad Dude provides the principle thematic or narrative focus. However, there are any number of movies out there where Beelzebub is mentioned in name only, therefore the likes of ‘The Satan Bug’, ‘The Devil’s Own’, ‘The Devil’s Arithmetic’ and ‘Shout at the Devil’ are excluded from the par-tay.

In terms of quality control … there is none. Expect acknowledged classics, Hammer favourites, foreign obscurities and low budget sleaze. Expect a lot of sleaze. I’ve had more than enough time to recover from last year’s Winter of Discontent and watch some proper movies. I feel the need for some crass exploitation.

And that’s exactly what we’ll be kicking off with tomorrow.

On the subject of Hammer, Robert Kenchington’s updated hardback edition of ‘Shane Briant: the Biography’ is now available. Go here to purchase, or check out the preview below: