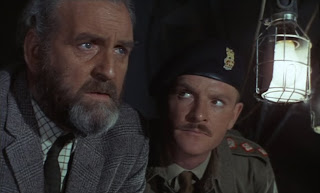 In his own quiet way, Professor Bernard Quatermass has proved as durable and reliable a British hero as Sherlock Holmes or James Bond. Created by Nigel Kneale for the BBC drama series ‘The Quatermass Experiment’ in 1953 and played by Reginald Tate, the show was a precursor of ‘Dr Who’ and proved so popular (‘Quatermass’ was to audiences in the ’50s what ‘The X Files’ was in the ’90s) that ‘Quatermass II’ made debuted on television in 1955, the same year that Hammer remade the original series for the big screen – titled ‘The Quatermass Xperiment’ (the misspelling drawing attention to its “adults only” rating) – and this is where the whole issue of casting gets a bit murky.

Tate died a month before ‘Quatermass II’, transmitted like its predecessor as a series of live weekly episodes augmented with pre-recorded footage, was due to air. John Robinson was cast at the last minute, even though he had doubts about filling the shoes of the much-loved Tate. ‘The Quatermass Xperiment’, meanwhile, featured Brian Donlevy in a less-than-charismatic performance as Quatermass. Kneale was scornful of both the actor and the production. Nevertheless, he contributed towards the screenplay of ‘Quatermass 2’, the big-screen adaptation, in 1957. Donlevy reprised the role, again blandly.

Between December 1958 and January 1959, BBC transmitted ‘Quatermass and the Pit’, one of the watershed moments in British television. This time, the lead role was essayed by Andre Morrell, who remains the definitive Quatermass for many viewers. A film version was inevitable, although it didn’t appear until 1967. Andrew Keir was cast, and gives arguably the best characterization of Quatermass after Morrell.

(If five actors over three shows and three filmic remakes isn’t scattershot enough, consider that Kneale resurrected Quatermass in the late ’70s, this time produced by Euston Films – the production company behind ‘The Sweeney’ and shown on rival channel ITV – called simply ‘Quatermass’ and starring John Mills; while ‘The Quatermass Experiment’ was remade for television, and again transmitted live, in 2005 with Jason Flemyng as the professor. Not to mention the theatrical production of ‘Quatermass and the Pit’ staged in a Nottinghamshire quarry in 1997 and starring David Longford.)

Hammer’s ‘Quatermass and the Pit’ is a reasonably faithful take on the series, truncating the original’s three hour running time to 95 minutes, excising an entire subplot and ramping up the apocalyptic finale. It also dispenses with the series’ coda in which the steadfast Quatermass makes an appeal to humankind about … (ah, but that would be telling!) … ending instead on a more ambivalent note. 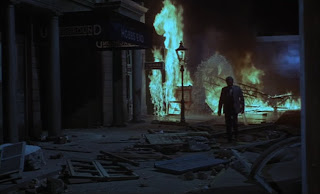 The plot has the extension to a London Underground line halted at Hobbs End station (John Carpenter used the name as homage in ‘In the Mouth of Madness’) when fossils are discovered. Dr Roney (James Donald) and his team of palaeontologists, including Barbara Judd (Barbara Shelley) work to recover as much as possible despite mounting pressure to get the civil engineering works underway again. When they happen upon something they believe to be an unexpected incendiary device from the war, the bomb disposal squad are deployed. Concerned that the object is formed from a substance that doesn’t correlate to any known German bomb, munitions expert Colonel Breen (Julian Glover) is called in. Breen has just got the nod from the corridors of power to take the reins at Quatermass’s rocket project, the military muscling in on scientific research and pissing the professor off no end in the process.

Tagging along while Breen conducts a reconnaissance, Quatermass bears witness to unusual phenomena at the site. As the bullish Breen goes about his business in clipped military fashion, Quatermass, Roney and Barbara uncover a history of unexplained sightings and superstitions based around Hobbs Lane (from Hob’s, an old English term for the devil). When the hull of the object – now revealed to be a craft – is breached, evidence of extraterrestrial life is recovered. Quatermass makes the find public, much to the approbation of the Prime Minister’s office. The government are quick to issue a rebuttal, preferring Breen’s theory of Nazi propaganda. The site is opened to public viewing, and by the time Quatermass puts the pieces together and realizes how dangerous the implications are, London is plunged into chaos.

Working from Kneale’s screenplay, director Roy Ward Baker builds towards the apocalyptic finale without a wasted line of dialogue of frame of film. ‘Quatermass and the Pit’ is one of the fastest paced Hammer productions I’ve seen. Even scenes consisting solely of expositional dialogue are delivered with palpable intensity. The script juggles superstition, religious hysteria, poltergeist activity, mind control and mob violence and bundles them together in an explanation which is still being used in tentpole sci-fi actioners to this day. (No spoilers, but imagine if the aliens in ‘Independence Day’ had been really cynical about it …)

Hammer’s first two Quatermass films were miscast cash-ins on the show’s popularity. The decade-delayed ‘Quatermass and the Pit’ – benefiting from a low-key directorial approach which makes the apocalyptic finale much more effective (and it’s worth mentioning how much apocalypse Baker gets for his limited budget), as well as a solid cast – is the real deal. The TV incarnation remains the best Quatermass outing (the character has also appeared in radio productions and novelizations), but this is a damn good take on the material.

You have a great blog, aom, when you have the time, please have a look at this horror movie post - http://www.comicbookandmoviereviews.com/2011/09/wwwterrortrapcom.html