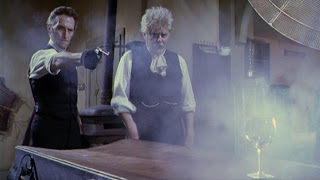 The fourth of Hammer’s seven Frankstein films, ‘Frankenstein Created Woman’ follows on from ‘The Evil of Frankstein’ (the odd-film-out in the series, with its awkward flashbacks which contradict the continuity of the earlier movies) and gets the franchise back on track.

As with the final entry, ‘Frankenstein and the Monster from Hell’, a lurid title gives the lie to a script that engages with metaphysical considerations. Perhaps the film’s greatest success is that it develops Victor Frankenstein (Peter Cushing)’s experiments in revivification beyond straightforward scientific enquiry and questions the existence of the soul.

It’s telling that the film opens – after a grisly prologue depicting the Baron’s assistant Hans (Robert Morris) witnessing his father’s execution as a child – with Frankenstein himself being brought back to life by village physician Dr Hertz (Thorley Walters) after being clinically dead for an hour. Frankenstein takes the fact that he is still in possession of his faculties and memories – his animus – as proof that the soul remains in the body after death.

He begins working on a means of isolating the soul in an electro-magnetic field (look, I said the film had metaphysical considerations, okay; I didn’t say the science wasn’t bunkum), i.e. holding the essence of a personality in storage while its dead or worn out body is surgically repaired. 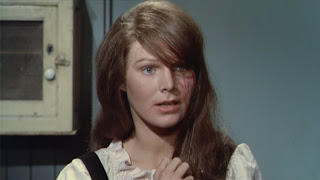 In the meantime, Hans is bunking off assistant duties to pay court to innkeeper’s daughter Christina (Susan Denberg). Facially disfigured and lame, Christina is self-conscious. Her stern but well-meaning father Kleve (Alan McNaughton) spends most of his earnings sending her to specialists. He’s unhappy at Hans’s attentions towards Christina, even though the lad plainly loves her for who she is, yet he doesn’t intervene when a trio of upper class wastrels – Anton (Peter Blythe), Karl (Barry Warren) and Johann (Derek Fowlds) – make her into a laughing stock. Hans does intervene, however, and bests them. He’s arrested, but slips away and returns to Christina’s room. Anton and his buddies, disgruntled, break into Kleve’s tavern and start drinking his stock of wine like it’s going out of style. Kleve returns unexpectedly and they set on him. Next day, after Christina leaves by an early coach for another appointment, Hans is arrested for the crime.

You can see where this is going, can’t you? 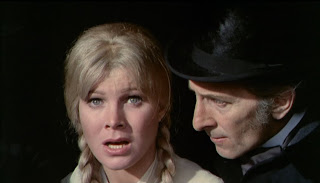 Long story short, Hans refuses to compromise Christina and is therefore unable to provide an alibi. Frankenstein and Hertz testify on his behalf, but the stigma of Hans’s executed father sways the jury. He’s taken to the guillotine just as Christina returns. Distraught, she drowns herself.

Frankenstein deals with his inability to save Hans by having Hertz obtain the body, from which he isolates the soul. At the same time, a group of villagers, having fished Christina’s corpse out of the river, bring it to Dr Hertz on the slim chance that he can do something. Frankenstein is only too happy to relieve them of the cadaver.

I don’t really need to tell you what happens next, do I?

‘Frankenstein Created Woman’ succeeds in ticking all the boxes required of a Frankenstein movie – esoteric experiments, nefariously obtained corpses, reanimation, a horde of angry villagers (no burning torches this time round, but – hey! – you can’t have everything) – as well as bringing some new material to the table. The revenge element imbues the first hour with a slow-burn tension as director Terence Fisher and scripter John Elder put all the pieces in place. The youths’ harassment of Christina makes for an extended and uncomfortable set-piece. Their subsequent attack on Kleve, all top hats and brass-topped walking canes as they set about him, prefigures the imagery of ‘A Clockwork Orange’ by several years. Kleve’s earlier cowerings – the middle class business-owned toadying to the aristocracy – says something about the British class system, particularly when compared to the gruff, working class bartender who takes over the establishment after Kleve’s death; this guy has none of it, and physically throws Anton out over a spilled glass. 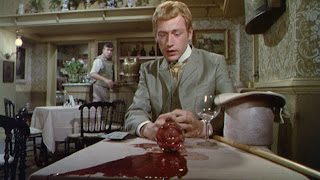 Elsewhere, the trapping of the soul by scientific means, notwithstanding some slightly cheesy effects work, demonstrates more chillingly than in any of the earlier films that Frankenstein is essentially playing God. There’s an interesting contrast to the youths’ louche amorality in Cushing’s portrayal of the Baron as, although charismatic, an aloof and patriarchal aristocrat, a man used to giving orders and having them obeyed. On a trip to the tavern he barely acknowledges Kleve except to demand champagne and a menu, he casually expects Hertz to foot his bills, and – having failed to sway the jury as to Hans’s innocence – delights in the research opportunities presented by his imminent demise. There’s almost a swagger about him, except that he’s too wrapped up in his work to play cock of the walk.

Cushing’s performance is absolutely pitch perfect, and the key reason for the success of even the lesser Frankenstein titles. He treats the character completely seriously. There’s never a self-knowing nod or wink to the gallery. Cushing plays Frankenstein as meticulously as, say, Dirk Bogarde played Aschenbach in ‘Death in Venice’. And no matter how ropy or bereft of budget some of the Hammer Frankenstein titles are, a performance of Cushing’s calibre is what gives them their longevity.
Posted by Neil Fulwood at 6:25 PM