MASTERS OF HORROR: Jenifer and Pelts

Continuing the Dario Argento love from yesterday’s entry, I thought I’d take a look at the two episodes he directed for ‘Masters of Horror’. 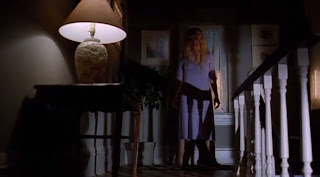 ‘Jenifer’ – a title I find strangely unfinished in its only-one-“n” spelling – was the fourth episode of season one. Adapted from a Bruce Jones short story by Steven Weber, who also plays the lead role, the basic set-up is that world-weary cop Frank Spivey (Weber) shoots a cleaver-wielding and crazy-looking guy who is about to despatch a facially disfigured young woman – the Jenifer (Carrie Anne Fleming) of the title. He has a hard time adjusting to the aftermath of his first fatal shooting and quarrels with his well-meaning wife and his moody teenage son. Distraught that Jenifer has been taken to a psychiatric institution, he insists on moving her into the family home, a decision that precipitates his family’s acrimonious departure.

As well as being disfigured, Jenifer is incapable of speech. At best, she whimpers or lets loose a throaty growl. She expresses herself emotionally with the pitiful nuzzling and licking of a pet; and physically with the sexual urges of a nymphomaniac who’s been mainlining oysters, ginseng and Spanish fly. A mutually dependent relationship develops between Frank and Jenifer, but when he discovers the true extent of her animalism, he installs her in a rickety cabin in the woods in the misguided hope that no further unpleasantness will ensue.

Did I say “unpleasantness”? The make-up department make a repulsively good job of turning Fleming (a woman who doesn’t even reside in the same hemisphere as the ugly stick – do a Google image search if you need proof) into a grotesque she-beast … albeit a grotesque she-beast with the body of a centrefold. Argento plays up the psycho-sexual elements to the hilt, as well as emphasizing the “beast in man” (or in this case woman) subtext with maximum visceral impact. Before the halfway mark, there’s a set-your-teeth-on-edge sex scene that takes its pointers from the crude old adage about not looking at the hearth when you’re poking the fire, followed by a bit of woman-on-feline violence that gives a whole new meaning to “cat food”.

The second half of ‘Jenifer’, with Frank off the force, sans family and relocated to the aforementioned cabin, sets up a potential dynamic when our increasingly troubled hero meets sympathetic local shop owner Rose (Cynthia Garris), only to resolve with an ironic circularity. While the means by which Argento and Weber arrive at the payoff might confound expectations, the twist itself is as easy to see coming as an ocean liner on a duckpond, establishing ‘Jenifer’ as an x-rated episode of ‘Tales of the Unexpected’, but no less perversely entertaining for all that. 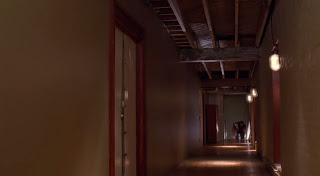 ‘Pelts’ – episode six of season two – seems, in its first quarter of an hour, to be setting up two stories: that of Jeb Jameson (John Saxon) inculcating his son Larry (Michael Suchanek) into the ancient and ignoble art of laying traps for small unsuspecting furry animals whose pelts are a saleable commodity; and that of Jake Feldman (Meat Loaf), an ill-tempered furrier who bullies the ethnic workers in his sweatshop and lusts after exotic dancer Shanna (Ellen Ewusie), the star attraction at a strip-joint he frequents.

Then Argento curtails the Jeb/Larry subplot in notably gory fashion and shifts the focus to Jake. If ‘Jenifer’ is an x-rated ‘Tales of the Unexpected’ episode, then ‘Pelts’ is an x-rated M.R. James tale. As James made the artefacts which his unerringly academic protagonists came into contact with the receptacles of some nameless and inexplicable evil, so ‘Pelts’ gives us raccoon fur as a purveyor of something unnatural, unholy and more or less unexplained (there’s a scene which hints at the provenance of the ground the raccoons inhabit, but for the most part Argento is content to leave it to the audience’s imagination; this is one of the smartest things a horror writer or director can do), the difference being that M.R. James would never have had one of his mild-mannered intellectuals angling for a lap-dance from a curvaceous stripper. 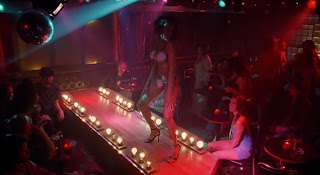 Essentially, ‘Pelts’ unfolds as an hour-long PETA commercial where the idea of having famous actresses declare that they’d rather go naked than wear fur is taken to a whole different level. It doesn’t work its way sneakily towards the spelled-out-in-flashing-neon denouement of ‘Jenifer’, although there is a sneaky bit of foreshadowing early on. There is also a lot more in the way of dark humour in ‘Pelts’. In fact, it’s one of the few Argento titles I can think of which trades on graveyard humour. I’d be hard pressed to say which is the better of these two episodes.

Taken together, though, these two hours of television add up to the best thing Argento has put his name to in the last decade. Both play wryly on his earlier work: ‘Jenifer’ features a recurring child-like musical cue that recalls the nursery rhyme in ‘Deep Red’, plus the ‘Stendahl Syndrome’-like riverside death of an antagonist; while ‘Pelts’ evokes ‘Opera’ in a shot of an eye nervously squaring up to a peephole and a jarringly weird moment where the camera seems to burrow into a bug-infested bit of grassland, homages both ‘Cat o’ Nine Tails’ and ‘Deep Red’ in an extended elevator/pool of blood set-piece, throws in a cackling old hag who comes across as a hillbilly second cousin to the Three Mothers, and suggests ‘Suspiria’ in the décor of Shanna’s garish apartment. 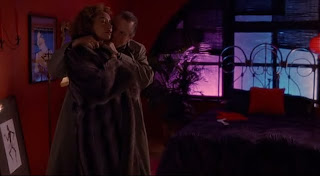 I’ve seen barely any ‘Masters of Horror’ episodes outside of these two – John Carpenter’s ‘Cigarette Burns’ and Takeshi Miike’s gruelling ‘Imprint’ being the honourable exceptions – but on the available evidence, I doubt there’s much else from either season that reaches these heights.

I'd recommend Joe Dante's Homecoming from the show Neil. I enjoyed Jenifer, but barely made it through Pelts.

Jennifer I was so so on, but I did like Pelt's quite a bit. Both were heads above Argento's later theatrical output.

One of my favorite details on Pelts (SPOILERS) is how pefunctory the sex that Loaf finally gets is. Its' so easy to mythologize so it's hilarious when Argento let's the scene end in a minute. It's like THAT? That's what we just watched a screenful of bodies get dismembered for? Beyond perfunctory stripper sex?

I too second Dante's Homecoming, and his Screwtape Solution is, how do I put this, not without interest (not exactly the same thing as a recommendation) . The real hidden gem though is Don Coscarelli's Incident On And Off A Mountain Road. Now that's the well done hour long B-movie that every episode of Masters should have been.

Thanks for the recommendations, guys. I'm starting to think about what titles I'll be watching for next month's 13 for Halloween mini-season, so I might feature a couple of those Masters of Horror episodes.

I'd recommend Homecoming as well, Neil. Interesting to see some political comment from Dante. My favourite is Cigarette Burns by John Carpenter - his best in years.

Jon - agreed; 'Cigarette Burns' beats anything Carpenter has put out theatrically since 'They Live'.

I'm definitely taking everyone up on the 'Homecoming' recommendation. In fact, I'm thinking of dedicating next month's 13 for Halloween season to small screen scares - selected episodes from 'Masters of Horror', 'The Twilight Zone', 'Hammer House of Horror', etc.

I don't know if it made it across the Atlantic Neil but if you can get your hands on the rather mediocre show "Fear Itself" through means scrupulous or not, you should watch the episode Skin & Bones as it gets my personal vote for favorite small screen horror show.

Again, thanks for the recommendation Bryce. After cruising some reviews of the various Masters of Horror episodes, I came across a breakdown of the Fear Itself schedule with capsule reviews and quotes from bloggers and TV pundits; the consensus of opinion wasn't positive. Still, even the worst shows are capable of producing isolated moments of inspiration, so I'll keep an eye out for 'Skin & Bones'.

I'm thinking of casting an eye over Stephen King's Nightmares & Dreamscapes - a show I've managed to remain blissfully ignorant of so far, even though opinions I've heard about it have been mixed. Any memorable episodes?