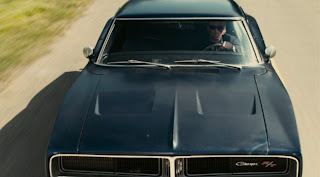 In which John Milton (1608 – 1674) loses his sight, wrestles with the big questions of humanity’s relationship to the divine and writes an epic poem that begins with man’s first disobedience and –

No, wait. Let me start over.

‘Drive Angry’. In which John Milton (Nicolas Cage) breaks out of hell in shriek of burning rubber and a cloud of petrol fumes, busts back through into the world of the living, and goes in vengeful pursuit of the Satanists who murdered his daughter and are intent on sacrificing his infant grandchild. 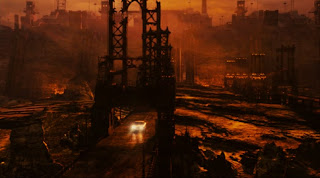 ‘Paradise Lost’ – the whopping free-verse poem about good, evil and everything inbetween – has about as much connection with the aesthetic of ‘Drive Angry’ as ‘The Canterbury Tales’ does with ‘Ilsa, She-Wolf of the SS’. That Cage’s character is called John Milton is best dismissed as the film’s unfunniest joke and all thoughts of epochal works of literature put to one side.

‘Drive Angry’, directed by Patrick Lussier, is a ribald throwback to 70s exploitation. It mixes the backwoods Satanism of ‘The Brotherhood of Satan’ and ‘Race with the Devil’ (in a nod to Jack Starrett’s film, the devil-worshippers’ preferred mode of transport is an RV) with the tyre-squealing car-porn of ‘Vanishing Point’, ‘Two Lane Blacktop’, et al. And it throws in a cluster of giddily OTT and luridly executed set-pieces, the likes of which make ‘Machete’ look like an exercise in mumblecore. 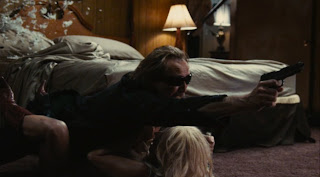 How OTT? Well, there’s the scene where Milton and The Accountant (William Fichtner) – a man deeply unappreciative of the negative impact Milton’s absconding from Hades has had on the figures – race each other across a bridge probably half the length of a football pitch. The sequence is so protracted, with exchanges of dialogue, exchanges of shots and characters swapping while they reload a variety of weapons, that before it’s half done you start wondering when exactly the bridge was extended – it suddenly seems to be a couple of miles long.

How lurid? Weeeeeell, take your pick from these two: Milton’s shagfest with a cocktail waitress interrupted by gunmen, whom he clinically despatches whilst still, ahem, maintaining his rhythm; or waffle waitress Piper (Amber Heard) quitting her job, returning home unexpectedly early, discovering her lowlife boyfriend in flagrante with another woman, and dragging said homewrecker naked out onto the lawn and putting her down with a couple of roundhouse punches thrown like a pro. 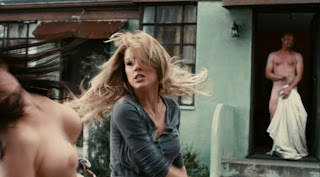 Yup, ‘Drive Angry’ gives you naked women, casually ridiculous violence (be it hand-to-hand, gunplay or the improper use of handtools), fast cars and Nic Cage not giving a flying fuck at a rolling doughnut that he’s pissed off the Prince of Darkness (“What’s he gonna do,” Milton sneers at one point, “not let me back in?”)

Cage isn’t quite as deliriously back on form as in ‘Kick-Ass’ or, definitively, ‘Bad Lieutenant, Port of Call: New Orleans’, but he’s still a lot more plugged in and giving it some than we’ve come to expect. Heard – playing the acid-tongued tough chick who finds herself along for the ride – is a blast: sexy, sassy, ass-kicking and attitudinous, the kind of gal whose pint you definitely wouldn’t spill. She’s more than just a foil for Milton; she gives the film a frisson that kicks it up a gear, pushing it beyond its obvious T&A/cars/guns laddishness. 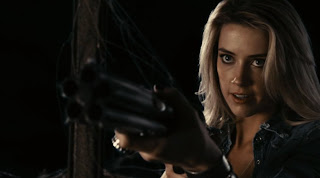 Just as good – almost miraculously conjuring an inspired piece of characterization – is Fichtner. The idea of Nic Cage (whose income tax blues were being slaveringly reported on while ‘Drive Angry’ was in production) being pursued by an implacable suit-wearing nemesis called The Accountant is a concept so meta it could have overbalanced the film: a one-note snidey joke on which large amounts of the narrative are predicated. Thank God, then, for Fichtner, who turns the character into a slightly prissy but stop-at-nothing antagonist. The only way I can describe it is as if Dirk Bogarde had played the T-1000. 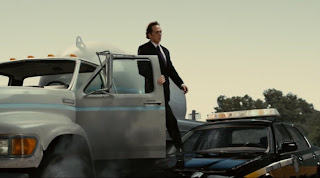 ‘Drive Angry’ is a filmic slab of Marmite – you’ll love it or hate it, and be hard pressed to find an indifferent review. Me, I laughed like hell for the 100-minute running time, developed a new-found appreciation of Amber Heard and bumped up William Fichtner a fair few places on my cool list.

Race with the devil? Donut with the bad dude, more like.

This seems to have played all over the planet but not here!! I've read countless reviews from various countries and yet its appearance here isn't forthcoming!!
All reviews seem favourable and Amber Heard is delicious so she's reason enough for me to go along and see it!
Funny even before I started to read your post I had a feeling Vanishing Point would be mentioned! Believe it or not I watched it for the first time in 30years last week! I'm in the process of doing a legthy write up at the moment.

The title is godawful, and as with most modern action and horror films, I thought the CGI was overdone, but in the end, my low expectations for this film were pleasantly exceeded. I had a lot of fun with it, and sometimes that's all you can ask for.

I laughed like crazy and drove home angry, but I obviously couldnt bring my self to call it a good movie. Good for a laugh yes for sure! How funny were those silly satanists? I ripped this one a new asshole on my review, but I must admit I had fun with it.

I thoroughly enjoyed this silly piece of nonsense. I love that the filmmmakers just went for it all the way down the line, knew they were making a mindless piece of exploitation and didn't waver one iota from that mandate.

And Fichtner ran away with the film, IMO. Best thing about it. I've always appreciated his work but it was great to see him get such a meaty role to sink his teeth into and just dig in.

That scene that Neil mentioned, the one about the bridge...ha ha ha so funny, they just keep talking and talking and reloading guns and they dont even look at the road, not to mention that the bridge goes on for miles and miles...hilarious...I wonder if that was intentional.

Hey Neil, did you laugh at that scene with the truck flying through the air? Now that was some legendary bad CGI!

Thanks for the comments, guys.

Brent - see it if you can, purely for what it is: a trashy, unapologetically politically incorrect throwback to the 70s (looking forward to reading your 'Vanishing Point' review, btw).

J.D. - agreed: good to see Fichtner getting a role worthy of his sly and impressive talents.

Franco - the CGI truck flipping over ... man, that was funny! I was starting to wonder, at that point, whether a reel of 'Pinkie and the Brain' had found its way into the editing suite by mistake!

I'm with you Neil, any movie that ends with a man drinking Simpler Times from a Skull is alright by me.