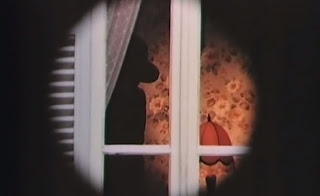 There is tradition in gialli of wonderful Italian titles being dumped for the English market and replaced with altogether more generic handles. Hence, ‘Perché quelle strane gocce di sangue sul corpo di Jennifer?’ (‘What Are These Strange Drops of Blood Doing on the Body of Jennifer?’) is retitled ‘The Case of the Bloody Iris’, while ‘I corpi presentano tracce di violenza carnale’ (‘The Bodies Displayed Traces of Carnal Violence’) becomes ‘Torso’. Maurizio Pradeaux’s ‘Passi di danza su una lama di rasoio’ (‘Dance Steps on a Razor Blade’) reached English-speaking audiences under the title ‘Death Carries a Cane’, which is at least apposite since the murder does indeed tootle about with a walking stick and even utilize said ambulatory aid in undertaking the murders. It’s certainly better than the German title, ‘Die Nacht der rollenden Kopfe’ (‘Night of the Rolling Heads’) which is total bollocks because, despite throat-cutting as the modus operandi, there’s not a single decapitation.

You might be wondering why I’ve just expended 150 words on alternative titling of gialli. It’s because, as a subject, it’s infinitely more interesting than ‘Death Carries a Cane’, one of the most perfunctory, pedestrian and determinedly unstylish examples of the genre I’ve ever come across. Which is a damn shame, since there’s trace elements of a decent mystery and some potentially interesting character dynamics going on. 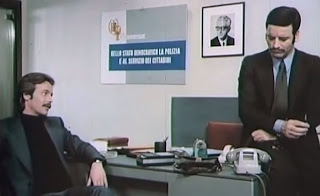 The story starts with photographer Kitty (Susan Scott) at a tourist viewpoint peering through a pay telescope while she waits for her boyfriend Alberto (Robert Hoffmann). She witnesses a murder (a figure in silhouette and gender-disguising hat and trenchcoat – i.e the classic sartorial choice of the giallo villain – is viciously knifing a woman) but her allotted minute at the telescope is up before she can identify anything other than the house number. Hastily shoving another coin in, she’s too late to get another look at the killer, but notices that a chestnut-seller’s stall was knocked over and a hooker pushed to the ground, presumably by the fleeing murderer.

Alberto turns up, flustered and limping, and accompanies Kitty to the police station where she makes a report to Inspector Merughi (George Martin), arguably one of the most useless coppers in a genre famous for inept policemen, who spends the entire film sharpening pencils with a razor blade and asking pointless questions. With Merughi disinterested and Alberto more concerned with some designs he’s working on for composer/theatrical director Marco (Simon Andreu)’s forthcoming show, only tenacious journalist Lidia (Anuska Borova) – who’s romantically involved with Marco but dispirited by his lack of libido – takes any real interest in the story. 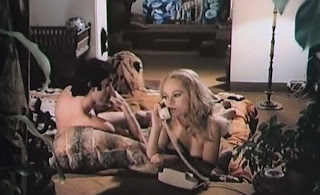 When the body is finally found and the modus operandi is determined to be the same as in an unsolved case that’s still on Merughi’s books, the inspector starts taking Kitty’s story more seriously. Then the chestnut-seller is dispatched and the police turn up their first clue: a bloodstain corresponding to the size and diameter of the tip of a walking cane. Remembering Alberto’s limp, Merughi fixates on him. Soon, even Kitty is suspicious of her boyfriend. Then Alberto is contacted by nosy old woman Marta (Nerina Montagnani) who tells him she knows who the killer is but wants money for the information. Alberto, determined to prove his innocence, agrees to get the moolah. No prizes for guessing who the next victim is.

Meanwhile, Lidia’s strained relationship with her twin sister Silvia (Borova again) – a dancer whose career went south after a leg injury – provides the link between the victims. Lidia begins to suspect her sister, while Silvia’s surly boyfriend Richard (Luciano Rossi) stares hypnotically at displays of knives in shop windows. The shoehorning in of Richard The Red Herring is utterly arbitrary. The casting of Borova of both sisters is confusing as the script – inexplicably credited to four people (I can only assume they wrote half a dozen scenes each without bothering to consult each other) – makes no effort to differentiate between them other than Lidia sometimes wears glasses; moreover, Silvia appears, un-namechecked, before it’s even mentioned that Lidia has a sister.

During the second half, ‘Death Carries a Cane’ settles into a nicely mysterious groove as clues seem to lead to a dance academy … only for the most arbitrary (and plot-hole ridden) ending I’ve yet seen in a giallo to come along and pull the plug on everything that’s gone before. It’s as if the writers decided, at the very last minute, to go for the ultimate rug-pull regarding the killer’s identity and were then forced to concoct a ludicrous bit of exposition in order to explain it. 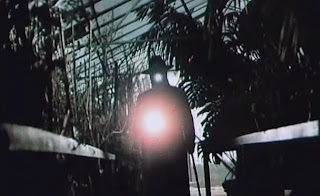 ‘Death Carries a Cane’ is a frustrating failure. Scene after scene hints at something really good if only they’d worked on the script a bit more and shot it with a modicum of style (cinematography and location work are drab at best). There’s a “production line” quality to the film, as if everyone turned up, did the bare minimum, wrapped the motherfucker as soon as they could and went down the pub. There are shoddy contrivances, blandly effective kill scenes that could have gone the grand guignol route to memorable effect, and some of the dreariest, least erotic sex scenes this side of a Joe D’Amto flick. It wastes giallo stalwarts Scott, Hoffmann and Andreu, and ends with a shrug rather than the heart-pounding jolt of a genuine revelation. It could have been a contender; it ends up taking a dive.
Posted by Neil Fulwood at 3:29 PM

Death Carries a Cane?? coolest name for a film ever...or damn near!!

If only the film itself had been half as cool as the title ...