SUMMER OF SATAN: Damned in Venice 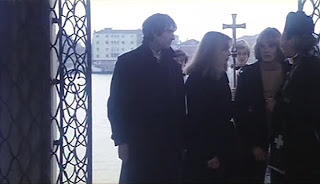 In which an ageing composer played by Dirk Bogarde travels to – … no, wait, wrong film.

‘Damned in Venice’ – the original Italian title ‘Nero Veneziano’ suggests ‘Darkness in Venice’ as a better rendering – is an atmospheric riff on ‘The Omen’ (it was made two years after little Damien and his nefarious nanny cleaned up at the box office) which, in my humble opinion, uses the material to much better and infinitely creepier effect than Richard Donner’s film. 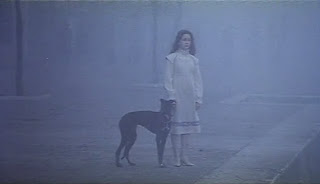 Mark (Renato Cestie) and Christine (Rena Niehaus) are siblings living with their strict grandmother (Bettine Milne). Their parents died in an accident and they barely know their maternal family, the Winters, as granny blames her son’s death on them. Mark, blind, is having visions of a sinister man with a cane whose appearance seems to presage death. Christine is conducting an on-off relationship with the earnest Giorgio (Fabio Gamma), a tour guide with aspirations of being a sculptor. Christine alternately hectors him to give up his “stupid job” so he can devote himself to his art and turn down his propositions of marriage because they don’t have enough money to start a life together.

When their grandmother dies in an accident (candle, dress) that Mark is unknowingly complicit in, meddlesome priest Father Stefani (Jose Quaglio) insists that they present themselves to the Winters, Martin (Tom Felleghey) and Madeleine (Olga Karlatos, in one of three roles), and take up residence with them. Initially sceptical of them, Mr and Mrs W nonetheless invite them into their dilapidated guesthouse. Mark, informed by Father Stefani that the house is the site of a well whose waters have a curative effect, hopes to cure his blindness. The visions persist, becoming increasingly graphic: he sees the man with the cane murdering his aunt and seducing his sister. 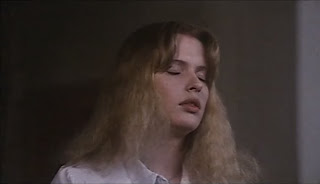 In quick succession, Madeleine dies and Martin commits suicide (or is driven to it). Christine, as the elder sibling, inherits the guesthouse. She throws herself into renovating the property and reopens it. Her first guest, Dan (Yorgo Voyagis), is the man from Mark’s visions. Christine becomes enraptured by him and brushes aside Mark’s concerns. She dumps Giorgio. Mark’s hostility towards Dan ends with the latter leaving the guesthouse.

Things take a strange turn. Christine discovers she’s pregnant, even though her lust for Dan was never consummated. Father Stefani takes an increasingly unpriestly interest in things, encouraging Christine to marry Giorgio for the sake of respectability. Christine turns the guesthouse into a brothel. Giorgio, who reluctantly agrees to the nuptials, sets himself up in a studio on Christine’s money. Despite Dan’s departure, Mark becomes ever more tormented. Giorgio, drinking himself into a pit of self-loathing, develops a kinship with his brother-in-law. Between them, they come to the conclusion that Christine is carrying the devil’s child. 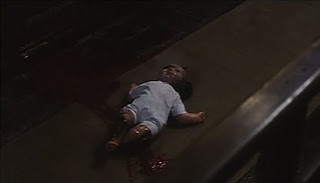 ‘Damned in Venice’ depicts a quagmire of relationships – by turns obsessive, jealous and destructive – cynical enough to suggest the protagonists are as damned as the English language title would have it. Throw in the horror genre tropes and things get darker still. If Mark’s visions are internal, what happens around him leaves no doubt that a higher (and darker) power is at work. Taps oozes maggots and worms. The well into which he trustingly dips his hand is plagued with rats; his fingers come within inches of a snake. A young girl who takes pity on Mark disappears and he later finds her rotting corpse, even though she appears to be alive to everyone else. The changes in Christine are palpable. Giorgio’s behaviour grows as erratic as Mark’s.

It’s to director Ugo Liberatore’s credit that he reins in a narrative which could easily have spiralled into hysteria, the cinematography (kudos to Alfio Contini) and staging always low-key even when the script reaches its most grand guignol. Events surrounding the birth of Christine’s son are gradually revealed as an inversion of the birth of Christ. Mark’s role in things isn’t revealed until the blow-to-the-solar-plexus denouement.

‘Damned in Venice’ goes into some dark and unforgiving places. There’s one moment in particular that’s guaranteed to make you wince even if there’s not a maternal or paternal bone in your body. But for all the demonically orchestrated deaths (random sampling: hanging, beheading, impalement), the gratuitous nudity (including Giorgio degrading himself with one of Christine’s hookers, played by the luscious Ely Galleani) and the general air of moral corruption, the credits roll on a moment of quiet acceptance that is all the more chilling for its context.

Another great review, duder. I love Damned in Venice. More people need to check this one out. I'm so glad you enjoyed it.