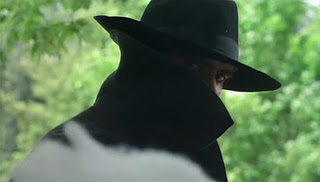 Wikipedia cites the Dario Argento produced ‘Wax Mask’ in its list of notable giallo titles, which was pretty much the only reason I approached it yesterday. I’d dispute its classification as a giallo, but not having watched any other giallo-rific titles in the last week, it’ll have to do for today’s post.

The story behind the film is possibly more notable than the film itself, so let’s start there. When the project got off the ground in 1996 it was intended as something of a comeback for Lucio Fulci, who hadn’t made anything for five years since the unfairly overlooked ‘Door to Silence’. Fulci collaborated with Argento on the screenplay (Daniele Stroppa also takes a script credit), the funding was lined up and pre-production completed. Just weeks before principle photography was due to start, Fulci died. Directing duties were swiftly assigned to SFX guru Sergio Stivaletti (Italy’s answer to Tom Savini). Stivaletti hadn’t directed before and has chalked up only three more directing credits since – two of them for television. The completed film was dedicated to Fulci and is something of a mixed bag. 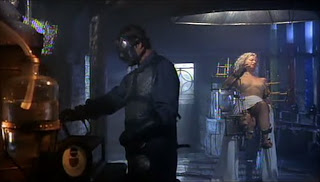 Loosely based on a story by Gaston Leroux – the same story that, equally loosely, provided the raw material for Andre de Toth’s ‘House of Wax’ and Jaume Collet-Serra’s yawnsome remake – things kick off in Paris on New Year’s Eve 1900, fireworks bursting over the city in stark contrast to the crime scene Inspector Lanvin (Aldo Massasso) is called to. A couple have been gorily murdered, their hearts ripped out by a cloaked figure with a mechanical hand. Their young daughter, hiding, escapes the slaughter.

Twelve years later we’re in Italy and Boris Volkoff (Robert Hossein) is preparing for the grand opening of his wax museum, a place that is already being spoken about as a chamber of horrors. Aristocratic layabout Luca (Daniele Auber) accepts a bet to spend a night there, intending to blow his winnings on the company of pert hooker Giorgina (Valery Valmond). He doesn’t live long enough to collect them. Volkoff pretends he’s aghast, but is secretly delighted at the potential publicity. Meanwhile, journalist Andrea (Riccardo Serventi Longhi) senses a story and romances Sonia (Romina Mondello), newly employed as a costumier at the wax museum, with a view to getting close to the enigmatic Volkoff. Sonia, in case you haven’t guessed, is the girl who survived the attack in Paris. And no sooner has she commenced employment with Volkoff than she’s a mite curious (not to mention slightly traumatized) as to how Volkoff has managed to capture her parents’ murders in such accurate detail for one of his macabre tableaux. 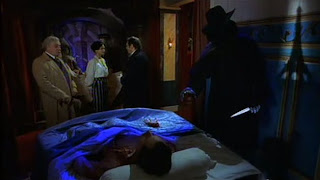 I guess the not-particularly-engaging mystery element, Sonia and Andrea teaming up to unearth the incredibly transparent truth behind Volkoff’s creations, just about permits a case to be made for ‘The Wax Mask’ as giallo. The set design, particularly the baroque layout of the museum and the gothic stylizations of Volkoff’s workshop, are more in keeping with Argento’s ‘Suspiria’. In fact, if the filmmakers had reimagined Volkoff as a female character, played by – say – Mercedes McCambridge, this could easily have been a part of the ‘Three Mothers’ mythos. Come to think of it, for all its tired genre tropes and general air of predictability, ‘The Wax Mask’, retuned slightly to incorporate Mater Lachrymarum, would have still presented a better conclusion to the trilogy than Argento’s own ‘Mother of Tears’.

In its defence, ‘The Wax Mask’ is prettily shot in a BBC costume drama kind of way (not that your average BBC costume drama would feature a scene where two people’s hearts are ripped out and impaled on what looks suspiciously like a kebab skewer but, hey, that’s just one of the ways the Beeb misses out!), while Maurizio Albeni’s lushly romantic score is so deliriously OTT that it swiftly emerges as one of the film’s chief pleasures. Hossein, Mondello and Massasso turn in perfectly acceptable performances. Valmond, as the sparky but ultimately ill-fated Giorgina, is much better than the material gives her any right to be in what was the second of only two film appearances. The gore scenes do what they need to do, there’s enough nudity to keep the horny toad as entertained as the gore hound, the whole thing ends in a massive conflagration, and there’s the obligatory twist ending that you’ll be able to see coming like an ocean liner on a duckpond. 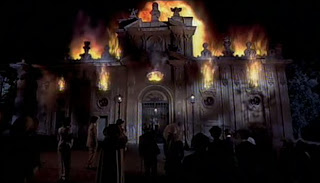 What you probably won’t see coming is an unrivalled moment of what-the-fuckery in during the fiery denouement where the film makes a sudden, jarring and jaw-droppingly inexplicable lurch into science-fiction. It sure ain’t Leroux’s original tale, I’ll tell you that.

So there you have it, ladies and gentlemen: today’s Giallo Sunday offering, a blood-drenched, wax-spattered horror/sci-fi/costume drama with just a soupcon – maybe – of giallo.
Posted by Neil Fulwood at 1:39 PM