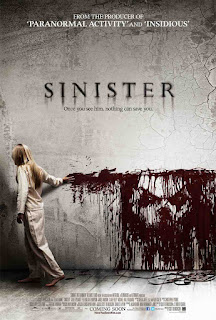 Described in terms of its most reductive elements – a couple with young children move into a house in which something violent and tragic occurred; inexplicable events happen; the children encounter spirits and/or start acting out of character – ‘Sinister’ sounds utterly boilerplate. The few words of that synopsis could be applied to any number of horror titles from ‘Amityville’ to ‘The Conjuring’. Most of which also ensure that the protagonists are financially overstretched so that simply grabbing the car keys and fucking right off the moment the weird shit kicks in isn’t an option to them.

The first of a handful of things that ‘Sinister’ does differently – not perhaps differently enough to vouchsafe it a reputation as a re-interpretative or deconstructive classic of its subgenre, but enough to keep the attention of the more jaded and difficult-to-please horror fan – is to make its protagonist white-collar and cerebral rather than blue-collar and mortgaged up to the hilt. (Have you ever noticed how often the paterfamilias in these kind of movies is a construction worker or similar? As if the scriptwriters are saying, “hey folks, this guy’ll be too dumb to figure out what’s going on, so he’ll have to consult priests and academics during the movie and we can therefore flood you with exposition”.) Granted, our rather nervy hero, Ellison Oswalt (Ethan Hawke), is scrabbling for a grasp at the brass ring as desperately as the bread-winners in ‘Amityville’ or ‘Conjuring’, but in his case it’s a reputational rather than fiscal imperative.

Ellison is a once-bestselling author whose reinvestigation of a murder case earned him a New York Times #1 bestseller, a period of flash-in-the-pan celebrity and the lifelong enmity of law enforcement officials wherever he goes – his wife, Tracy (Juliet Rylance), complains of spending her life driving at five miles under the legal limit and being ticketed anyway – due to his less-than-flattering portrayal of cops. Subsequent books don’t seem to have recaptured his initial success – a mordant early scene has an antagonist hick sheriff (Fred Thompson) enumerate the various inaccuracies in each volume – and he’s pinning his hopes on a literary comeback on an account of a murdered family and a missing girl.

Marital tensions are already rife between Ellison and Tracy, the latter despairing of how her husband’s writing comes before his family. Tracy’s reservations that they are once again going to be moving, as a family, “two doors down from a crime scene”, are quickly proved right. For this time Ellison has actually moved them into the crime scene. The argument that erupts when Tracy finds out is as hide-behind-the-sofa as any of the supernatural elements. Hawke and Rylance nail the dynamic of a couple whose relationship is unravelling: they yell impotently, stumble over their words, pick up mid-sentence on something the other has said and the argument zings off peripherally like a pinball. God knows whether it was scripted so precisely, or ad-libbed during filming, but it’s a tour de force of kitchen sink realism and it anchors the more obviously hokey and generic narrative beats.

Horror is generally more interesting when mature characters are called upon to deal with the inexplicable. Even a second division outing like ‘Vacancy’ immediately benefits from focussing on a couple in their thirties and the emotional baggage of their lives so far, rather than throwing a bunch of kids into the mix and thumb-twiddling through the obligatory tomfoolery and making out, merely killing time until the blood-letting starts. In ‘Sinister’, a flawed but basically decent bloke (he genuinely cares about his kids, even though Tracy’s accusation about his priorities isn’t without foundation) has a significant reason to remain in a haunted property; moreover, his co-option of a local deputy and an academic with an interest in the esoteric – the kind of characters, as noted above, who are usually introduced merely to spout exposition – are not only narratively relevant but provide insight into Ellison’s personality. His borderline exploitation of the puppyishly enthusiastic deputy (for whom a mention in a book’s acknowledgements page is the highest accomplishment he can think of) demonstrates how sneakily Ellison conducts his research and is the film’s clearest indicator of why Tracy has come to view her husband’s profession with trepidation.

The supernatural elements start innocuously: Ellison finds an old projector and some canisters of Super 8 film with bland titles like “Pool Party” and “Sleepy Time”. Running them, he finds they all follow a pattern: surreptitious documentation of a family interacting together followed by the ritualistic killing of same in a manner that mimics or subverts the dynamic which brought them to their offscreen murderer’s attention. Ellison is initially repulsed, but when he finds footage of the case he’s investigating, curiosity and the promise of a surefire bestseller prove too compelling. Naturally, he’s concerned that the material be kept from his children and he’s careful to stow the projector and the film cans away, even keeping them under lock and key. Progressively, however, he wakes in the night to find the projector set up and scenes of horror flickering across the walls of his home.

For a good chunk of the film’s middle section, director and co-writer Scott Derrickson treads an ambiguous enough line – things half-seen; Ellison behaving increasingly erratically – to suggest it’s either all in his mind or that he’s being possessed by whatever malevolent spirit is at work. Ellison’s research and the gradual uncovering of connections between the murder victims is juxtaposed against his embattled mental state, his fragmenting marriage and the potential psychological impact on his children. All told, Derrickson brings slow-burn tension to boiling point with remarkable aplomb for someone whose previous genre outings were the best-not-spoken of ‘Hellraiser: Inferno’ and the unfocussed ‘Exorcism of Emily Rose’. He keeps his villain – identified in various children’s drawings as “Mr Boogie” – firmly in the shadows. His big scare moments are earned, and there is remarkably little playing to the gallery.

Right up, that is, until the end. There would have been a really simple and effective way to conclude ‘Sinister’: right at the point where Ellison receives the crucial last piece of information. A ‘Tenebre’-like reveal of a character behind another character; a face at a window; or just an abrupt cut to black and an ambiguous noise on the soundtrack. ‘Sinister’ could easily have kept its demon in the shadows and its audience unnerved. However, Derrickson does two things in the last five minutes which threaten to unravel much of the good work he’s achieved up till then. Neither of these moments utterly deflate the film like, say, the last third of ‘Insidious’, but it’s still an annoyance that ‘Sinister’ stumbles so wonkily after not putting a foot wrong for nearly two hours.
Posted by Neil Fulwood at 10:39 PM

I've only seen this one once, and it left little impression upon me. I do remember the super-8 films within Sinister and thought they were quite effective: creepy, provocative, and visually well-done. Just nothing else is memorable. Happy Halloween, Neil.

Hi, Hans. Agreed: the home movie scenes are the absolute best moments in 'Sinister'. I enjoyed how low-key and grounded in character motivation the film was ... right up until that generic, by-the-numbers ending. Like a lot of recent horror movies, it was just okay when it could have been so much better.

It's not great (and neither was the first one) but thanks to Derrickson and Cargill returning to script it has an agreeable amount of continuity with the first (and a reasonably clever way to keep the story going). Another bit of nicely aged up casting and some eerily effective moments.

There are really only two things *wrong* with it, two egregiously dumb beats, one an overcomplicated Super 8 that involves Crocodiles and the other a crippling shock inducing wound sustained by one of the heroes in the end which is treated as "I-Got-Stabbed-In-The-Shoulder-But-I'm-Gritting-My-Teeth-Because-It's-Only-A-Flesh-Wound" that broke my suspension of disbelief more than any demon.

Not great, but a decent programmer. And two dumb moments is pretty much par for the course in a modern horror movie.

In short I have no damn idea why it pissed everyone off so much.

Thanks, Bryce. To be honest, I skipped 'Sinister' on the big screen on account of the indifferent reviews but was pleasantly surprised when I caught up with it on TV recently. Based on your (cautious) recommendation, I'll be interested to see what the sequel does with the material.

Hello everyone, It’s just so unfortunate that there are a lot of scammers when you try to hire a hacker. Luckily for me, my cousin referred me to (wisetechhacker @ gmail com), OR WhatsApp +1 (424) 283 6238 a hacker she used when she wanted to hack into a website and database. I went on to read reviews about him and he is really remarkable. I hired him to help me hack my husbands phone, email, facebook, and all his social accounts because I suspected him of cheating and I just wanted to prove it. The hacker did an incredible job by cloning my husband’s phone and even giving me access to his social accounts and I could monitor all his activities. Contact (wisetechhacker @ gmail com) for a real and genuine hacker.