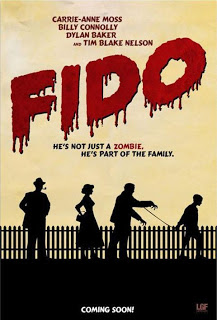 Welcome to Canada, home of ice hockey, the Mounties and a population who are notable for not being American. Not that there seems to be much difference in the town of Willard. In a vision of Americana straight out of ‘Pleasantville’ and garnished with the swish materialism of ‘Mad Men’, executives in sharp suits drive shiny convertibles while their wives wear petticoats and mix martinis. The opportunities and good living the citizens of Willard enjoy are all thanks to Zomcon, a corporation that handles undead security in the wake of the zombie wars.

Let’s pause to exhume the backstory. Andrew Currie’s ‘Fido’ takes place in an alternative history 1950s where solar radiation has caused a plague of zombies. Military intervention forestalls the immediate threat. Meanwhile Zomcon pioneers a collar device that controls the zombies’ urge to eat flesh. Rendered docile, the undead are put to work as gardeners, housekeepers and unskilled labourers, Zomcon guaranteeing that any problems will be swiftly taken care of.

One such problem occurs after Helen (Carrie-Anne Moss) acquires a zombie in order to keep up with the neighbours. She’s keen to propel husband Bill (Dylan Baker) up the career ladder and since their neighbour is Jonathan Bottoms (Henry Czerny), head of security at Zomcon, the couple seek to ingratiate themselves. Meanwhile, their lonely and socially inept son Timmy (K’Sun Ray) begins to bond with the zombie (Billy Connolly) and names him Fido. Yes, that Billy Connolly.

Bill’s an old-school zombie hater, mainly on account of his father being killed by (and subsequently turning into) one. He’s further antagonised when he realises how affectionately Timmy, and later Helen, regard Fido. Things take a macabre turn when Fido’s collar malfunctions and he attacks a bystander. Owing Fido a favour – the zombie interceded when bullies had him cornered – Timmy helps cover up the death. Inevitably, Fido’s victim comes back from the dead, one bite leads to another, and soon Willard is threatened with a bona fide zombie invasion.

‘Fido’ is an odd little film, not least for casting legendary raconteur Connolly in a non-speaking role. Tonally, it veers from poignant rites-of-passage piece (the title encapsulates the “one boy and his dog” aspect of the material) to Lynchian small town dystopia by way of a satirical enquiry into America’s complicated fear/dependency relationship with homeland security. Large scale alternative history world-building strains against budgetary limitations (the madcap finale suffers as a result), whereas steadily accreted minutiae paint a more effective picture. The POV flits from Timmy to Helen, with Timmy in particular too often sidelined. The director’s humorous broadsides are equally uneven, ranging from Hitchcockian black humour (a ‘Trouble with Harry’-style corpse disposal is inspired) to the kind of slapstick you’d associate with the final reel of ‘Blazing Saddles’.

If ‘Fido’ never quite coheres, then its flaws are not for want of ambition. “A man’s reach should exceed his grasp,” Robert Browning once declared, “or what’s a heaven for?” ‘Fido’ exceeds the grasp of its pallid, bony, clutching hands. But Heaven’s the last thing on its mind; brains, however … brrraaaiiinnns.
Posted by Neil Fulwood at 9:30 PM