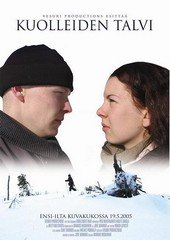 Think Finnish cinema and you’ll probably think of Aki Kaurismäki and then sit around and scratch your head for quite some time. In fact, think Finland in general and you’ll probably come up with saunas, reindeer and the stark, wintry beauty of Sibelius’s symphonies and tone poems. In Markus Heiskanen’s 35-minute short, the nuclear winter is the order of the day. The country is ravaged, survivors are few (the script flirts with the frankly bonkers concept of radiation immunity but doesn’t really explain it) and zombies are a fact of life.

The film starts in ‘Omega Man’ fashion: Toni (Pasi Martikainen) maintains a lonely outpost against the undead. His low-key, reflective voiceover paints him less as a survivalist or gung-ho military type than a regular guy who has used intelligence and practicality to adapt. He lives by routines and safeguards.

It’s a shock to discover – a third of the way in – that Toni is not alone. Once a week, he visits Risto (Antti Riuttanen), who he refers to as his neighbour even though their houses are miles apart. They’re a study in contrasts: Toni is disciplined, sober and self-sufficient; Risto is laid back, brews moonshine and curates the largest collect of girlie magazines in Finland. (One assumes they’re all back issues, since the possibility of a “zombie’s wives” edition is frankly unpalatable.) Toni and Risto spend a little quality time discussing the frequency and intensity of zombie attacks, knock back some hooch, smoke a pipe and recreationally shoot zombies in the head as they sit by the lakeside. Then Toni heads home and reflects that it really doesn’t do to cultivate friendships in this zombified new world.

Thus far, Heiskanen establishes a chilly aesthetic, sketching in his protagonist as a man of few words and cautious actions. The Toni/Risto interplay leavens the atmosphere with wry humour. A feature length exposition of the movie would function equally well as stark existentialism or comedy horror. For all that Risto is the comic foil (albeit granted a moment of rough-diamond gravitas by the end), the focus is on Toni and his pragmatic stripping away of all unnecessary emotion and sentiment: the price he pays for staying alive.

So effective is this portrait that it’s almost regrettable when Marika (Kirsti Savola) appears, driven out of the village in which she sheltered as the zombie attacks become more ferocious. Toni finds her unconscious and almost frozen to death, but is reluctant to offer shelter. Risto, meanwhile, is reduced to gormless gawping at the sight of a woman. Fortunately, Heiskanen avoids the obvious pitfalls and – apart from the single Hollywood-like shot that concludes the film – steers away from the clichéd possibilities of burgeoning relationships and romantic rivalries. Better still, Marika is the complete antithesis of the outmoded woman-in-peril heroine, pulling her weight, stating her mind and blasting zombies in the head as determinedly as Toni or Rosti.

If ‘Winter of the Dead’ never gets developed as a feature or remade Stateside, it will leave the original as a stellar example of how craftsmanship and imagination can triumph without CGI or a blank cheque to the special effects department. On the other hand, it would be thrilling to see what Heiskanen could do with a reasonable budget.
Posted by Neil Fulwood at 10:00 PM

I have just installed iStripper, and now I enjoy having the sexiest virtual strippers on my taskbar.