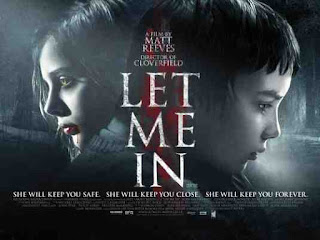 Pretty much the only misstep Matt Reeves’s ‘Let Me In’ makes is the truncation of its title from John Ajvide Lindqvist’s novel – and Tomas Alfredson’s earlier film adaptation – ‘Let the Right One In’. “Let me in” is a blunt request or command. “Let the right one in” has about it more of a caution or a warning; it adds an extra layer of meaning to the book/film.

Lindqvist made an immediate name for himself with ‘Let the Right One In’, earning comparisons to Stephen King. And the book certainly has the narrative verve and economic characterisations that typify King’s best (i.e. least verbose) works. It’s also pulpy as all hell, and no-one’s idea of literary fiction no matter what some of the more fawning reviewers might have you think.

Alfredson’s Swedish language adaptation took a chilly, somewhat Cronenbergian approach to the material; a good aesthetic decision, but I found the direction a little too removed from the story being told; the performances slightly too well-considered. It lacked, for want of a better expression, the human element. Granted, the human element in a story about a bullied kid forming a tentative relationship with a centuries-old vampire trapped in the body of the 12-year-old girl whose requirement for blood necessitates a series of grisly murders carried out by her middle-aged paedophile companion is a relative concept; but nonetheless, the relationship between troubled child and vampire is at the centre of the narrative and without some degree of emotional engagement, the concept flounders.

Reeves (making a quantum leap as director from the hackneyed ‘Cloverfield’) trusts to the director’s two greatest allies: script (his own) and cast. The script keeps its real horrors (bullying, broken homes, social disenfranchisement) to the forefront while backgrounding the supernatural elements – quite literally backgrounding: virtually every scene of Abby (Chloe Grace Moretz) attacking someone for their blood or scaling is done in long-shot. Close-ups are reserved for the aftermath: the smears of blood on her face; the crazed look of an animal in her eyes. The script also strips away Lindqvist’s more heavy-handed moments, particularly the pile-up of narrative developments that make the second half of the book so top-heavy. It also sanitizes the relationship between Abby and Thomas (Richard Jenkins), almost conjuring him as a sympathetic character rather than abject failure of a human being crushed by self-hate that Lindqvist and Alfredson have him as.

And having mentioned Moretz and Jenkins in that last paragraph, let’s sing the praises of the cast. In a career that’s consisted of youthfulness juxtaposed with worldly-wise (or, in the case of ‘Kick-Ass’, wholly inappropriate) behaviour, Moretz was the obvious choice to play a character who is essentially Nosferatu shoehorned into Lolita’s prepubescent form. Her performance is understated and, at times, purposefully gauche; yet, when Reeves needs her to remind the audience exactly what Abby is capable of, she’s chilling. That scene in ‘Goodfellas’ where de Niro stands at the bar, eyes flicking from person to the next as he works out who he needs to silence? Moretz does a similar thing, but straight to camera. Jenkins is basically faultless: I’ve never seen a Richard Jenkins performance that’s less than pitch perfect. He’s simply one of the best actors around. Smit-McPhee, as the luckless Owen, a victim who’s only a couple of steps away from becoming an aggressor himself, is astounding. Your heart breaks for him in one scene, only for his burgeoning obsession with knives to worry the hell out of you moments later.

Three great central performances; three instinctive pieces of characterisation. And yet it’s Reeves as director I keep coming back to – a man whose CV prior to ‘Let Me In’ suggested, at best, a proficient hack – not only for his intuitively empathetic script and his facility with an exemplary cast, but his confidence in the pacing of the film, allowing the characters to emerge as products of their past or their environment, letting the drama and tension develop organically, letting the genre elements gradually bleed into an already tautly disturbing set-up.

‘Let Me In’ isn’t just a damn good vampire movie or horror movie; it’s a damn good work of cinema, period. As a remake, it’s peerless.
Posted by Neil Fulwood at 3:50 PM