Under no set of even remotely objective critical perameters can ‘The Raven’ be described as good. Charitably, the descriptions “mishmash”, “ill-conceived” and “flawed” might best apply. Anybody immediately galvanised to scroll down to the comments section and leave a remark along the lines of “what the hell are you talking about, Fulwood? it’s an abject piece of shit” would do so without any attempt at argument from yours truly.

But dammit, I’d been emotionally wrung out by ‘The Babadook’ and disappointed in the extreme by ‘It Follows’ and I went scouting for something that I’d approach with such low expectations that I might just find myself pleasantly surprised. ‘The Raven’ didn’t quite pole-vault up from the wasteland of its reputation (which, as much as it has one, is probably the critical equivalent of a shrug of the shoulders and a vocalisation of the “meh” variety) and reveal itself as an overlooked and/or misrepresented cult classic, but it did waltz me through the ballroom at the What The Fuck Lounge for an hour and three quarters while the strains of the So Bad It’s Watchable Symphony Orchestra melted around us. And for that I’m … well, no so much thankful as moderately unrepulsed by the experience.

‘The Raven’, superficially at least, takes its cue from those occasional ‘Doctor Who’ episodes that posits the Time Lord’s influence on an historical figure during a period of personal crisis (Vincent van Gogh in ‘Vincent and the Doctor’) or purports to explain a blind spot in their biography (Agatha Christie in ‘The Unicorn and the Wasp’). Here we have the final days of Edgar Allen Poe and a monumentally lurid solution to his mysterious demise. Only without David Tennant or Matt Smith or a blue telephone box. These absences prove a serious flaw: ‘The Raven’ would have been fucking amazing as a 45-minute ‘Doctor Who’ story.

As it is, we have an overwrought feature length movie scripted by Ben Livingston (a TV actor whose only writing credit this is) and Hannah Shakespeare (a writer of TV pabulum such as ‘The Playboy Club’ and ‘Killer Woman’) and brought to life by the director of ‘V for Vendetta’ and ‘Ninja Assassin’.

So, having examined the film’s credentials and vigorously washed our hands, let’s proceed to a synopsis. It’s 1849 and Poe (John Cusack) is trading on former glories, reciting his gothic poem ‘The Raven’ to anyone who’ll listen and churning out bitchy screeds of literary criticism to the indifference of newspaper editor Henry Maddux (Kevin McNally) who would much prefer the spine-chilling short stories of Poe’s earlier career. He’s also in the habit of getting thrown out of taverns on account of his inability to settle his tab, and punching way above his weight in terms of a nascent romance with Emily (Alice Eve), daughter of abrasive socialite Capt. Charles Hamilton (Brendan Gleeson). With enough going on in his life already, Poe is suddenly and bluntly hauled into a police investigation when Inspector Fields (Luke Evans in a role originally earmarked for Jeremy Renner and I could weep at how much better that would have made the film) realizes that a series of grisly murders owe their modus operandi to Poe’s fiction.

The genre fan will have immediately pegged that what we have here is Dario Argento’s ‘Tenebre’ reversed-engineered by a century or so and hung upon the gothic reputation of an actual horror writer rather than the fictive Peter Neal. And director James McTeague mines Argento’s ‘Tenebre’ and ‘Opera’ for the best scenes ‘The Raven’ has to offer. Indeed, the corvine imagery of the raven owes as much to the finale of ‘Opera’ as it does to Poe’s gothic poem. In fact, for all the imagery of ravens that haunt the film, McTeague and his writers seem to forget that ‘The Raven’ was in fact a poem and therefore doesn’t correlate with the central narrative of a copycat killer basing his crimes on Poe’s short stories. Had the film been called ‘Rue Morgue’, ‘Amontillado’, ‘Masque of the Red Death’ or ‘The Premature Burial’, those titles would have actually been earned. 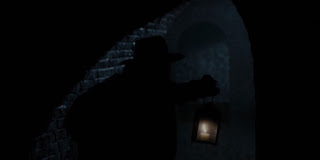 Also, for all its slavish rehashing of Poe’s most macabre concepts, there are moments where scripters, director and actors demonstrate total misconception of Poe’s work, particularly in the scene where Cusack references the short story ‘The Facts in the Case of M. Valdemar’ by pronouncing the “M.” as a initial rather than “monsieur” (the character’s name is in fact Ernest Valdemar). Then there are the logistics of – no spoilers here – what it would have cost the perpetrator to reconstruct Poe’s tales (specifically the mechanism required to approximate ‘The Pit and the Pendulum’ and the rental on a building large enough to house it) in terms of what that character actually does for a living.

At its best – a cat ‘n’ mouse hunt through a theatre, a shadowy subterranean pursuit, a horseman bursting into a masked ball – ‘The Raven’ wears its cheesy B-movie heart on its sleeve and makes no pretence that it exists for any purpose other than as a delivery system for hyper-stylised but inherently camp grand guignol imagery. At its weakest, it tries to blend the best of Argento with a worst of Eli Roth and stir in the tabasco sauce of ‘Seven’. In these moments, as may be imagined, the flavor is decidedly questionable.
Posted by Neil Fulwood at 11:58 PM