13 FOR HALLOWEEN #6: Children of the Corn 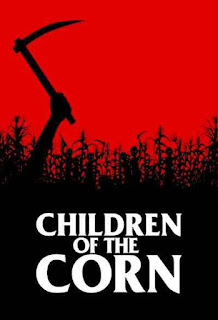 In my paperback copy of ‘Night Shift’, Stephen King’s first short story collection, ‘Children of the Corn’ clocks in at 35 pages. It’s one of the creepier tales in that volume, but nowhere near the best of King’s short fiction in the greater scheme of things. Dragging it out to a 93 minute feature film was stretching the material enough, but for some reason that I don’t think I could fathom if I retired to the mountains and gave it my full philosophical consideration, Zen Buddhism stylee, the story birthed a three-decade franchise encompassing nine films including a 2009 remake of the original for the SyFy Channel. A franchise, sure, but one that’s distinctly low-rent.

Let’s consider the original. Newly qualified physician Burt (Peter Horton) is driving through the corn-swathed countryside of Nebraska with his girlfriend Vicky (Linda Hamilton) when a young boy runs out from said corn and they inadvertently run him over. Burt – who spends the movie behaving more like an amateur (very amateur) sleuth than a medical professional – deduces that someone must have been chasing the boy, hoists a crowbar from his car boot and goes wandering off into the fields to investigate, having first admonished Vicky to stay in the car and keep the doors locked. Presented with the isolated locale, the trauma of just having run over a child, and the uncertainty of her partner suddenly haring off, Vicky responds by taking a nap. She dreams that someone with a scythe is creeping up on her. Awaking with a start, she finds that Burt has returned none the wiser. They decide to wrap up the boy’s corpse, stuff it in the car boot, and drive into a small town called Gatlin.

Burt and Vicky driving around and slowly realizing that something very freakin’ weird is going on accounts for pretty much the next half hour. These scenes are interlaced with occasionally spooky, occasionally stupid scenes of the children of the town behaving in a decidedly unhealthy manner. Scenes that would have worked much better if director Fritz Kiersch and scripter George Goldsmith had allowed the audience to come to a realization of the town’s ungodly secrets as gradually as Burt and Vicky do. As it is, however, they set out their stall way too early with an opening sequence in which the children of Gatlin slaughter the adults. By rights, this should have been brutal and chilling, but the acting tips it into hilarity, particularly when Kiersch cuts away to prepubescent ringleader Isaac (John Franklin) sneering through a window and looking less like a messianic psychopath than a cute ickle kid whose favourite cartoon has just come on TV.

As Burt and Vicky discover more about the quasi-religious shenanigans to which the kids are in thrall, the more the power struggle between the supposedly urbane Isaac and his bumpkin second-in-command Malachai (Courtney Gains) comes to the fore. Again, this is potentially dramatic material, and the religious elements even threaten to become interesting. But Gains’s acting is worse than Franklin’s. By the time he appeared in ‘The ’Burbs’ and ‘Memphis Belle’ just half a decade later, Gains’s talent had developed no end; here, though, in his first movie, he overdoes it and then some. Mind you, Hamilton is no better and there was less than a year between her pitiful turn in this movie and her iconic performance in ‘The Terminator’.

Blame it on the script? Blame it on the direction? A little bit of column A, a little bit of column B, perhaps. Certainly the script’s deviations from King’s story weaken things. The direction falters when it comes to performances, but the atmosphere is often successful, even though Kiersch tries too hard to conjure a ‘Wicker Man’ vibe. Ultimately, it’s one of those films that inspires not so much a bad reaction as a “meh” kind of reaction. It’s a film that would never have been great, but needn’t have been this bland.
Posted by Neil Fulwood at 12:47 AM