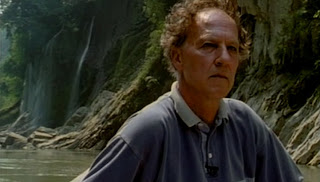 It's Werner Herzog's 67th birthday today and given some of the lunatic enterprises he's undertaken in the name of cinema - including flying into an evacuated Caribbean island to film its potential destruction by volcano, and not one but two journies into the heart of darkness with fellow Germanic crazy person Klaus Kinski - it's nothing short of miraculous that he's made it this far.

To celebrate, it's Herzog weekend here at The Agitation of the Mind. I'll be looking at some of his short films, considering his most maverick moments, and burying my head in the newly published 'Conquest of the Useless', Herzog's diaries from the making of 'Fitzcarraldo'. And as soon as the sun is over the yardarm, I'll be cracking open a beer and drinking to the continued good health of one of cinema's most original and inimitable talents.

In an interview last year with Alan Yentob on BBC1, Herzog corrected Yentob's reference to him as "a German". He is, as he pointed out, Bavarian. With this in mind, and my apologies if I've mangled the dialect, Ois Guade zu Deim Geburdstog, Herr Herzog.
Posted by Neil Fulwood at 2:04 AM