The Leningrad Cowboys are a Ukranian ensemble with a heavy balalaika influence to their repertoire. Their manager Vladimir (Matti Pellonpaa) - a man who gives orders in brusque fashion and wears a fur coat so big it looks like the fucking Yeti gave its life for it - gets them an audience with a producer. The verdict: the Leningrad Cowboys suck. So much, in fact, that the producer's best advice is that they go to America. He puts Vladimir in touch with his cousin who, in turn, books the band to play a wedding gig. 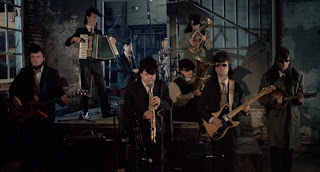 With their deceased bass-player as part of their luggage and their one fan (a demented individual who stalks them even though they beat him off with sticks) in tow, they set out for the US of A. What follows is a freewheeling, eccentric road movie. Think 'The Straight Story' with a stretch limo instead of a ride-on lawn mower and a selection of dodgy cover versions instead of Angelo Badalamenti's haunting score. 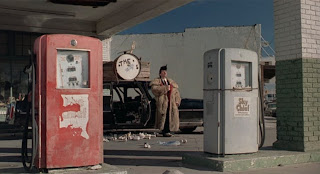 The songs range from "That's All Right, Mama" in a redneck bar to "Born to be Wild" in a bikers' bar by way of their one bit of original material, "Ballad of the Leningrad Cowboys"* in a C&W joint called the Club Zhivago - an ideal venue, one would think, for a Ukranian band. Unfortunately, it goes out of business after the Cowboys headline there for a week. Coincidence? Comment on American economics? Satirical rejection of the concept of America as the promised land? You decide. 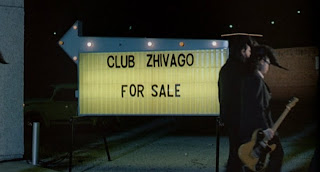 Likewise, with the quality of the music. A celebration of the rough 'n' ready ethos of rock 'n' roll, in which anyone can pick up a guitar, hammer out a few chords, bawl the lyrics into a microphone and find a valid mode of self-expression? A bunch of random but instantly recognisable tunes given a distinctly Eastern European flavour? An hilariously tuneless and inept showcase for the most deliberately awful phoney band since Spinal Tap in 'This is Spinal Tap'? You decide. 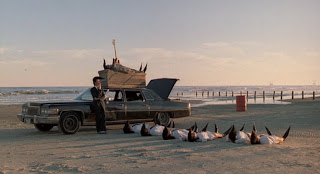 What's for sure is that Aki Kaurismaki's deadpan classic is one-of-a-kind. And when I say deadpan, I mean it. The dialogue is deadpan. The music is performed deadpan. Even the cinematography is deadpan. But of course, it has to be. 'Leningrad Cowboys Go America' is too absurd to be played any other way than dead straight. After all, this is a film whose heroes are nigh on identical, big quiffed and monosyllabic; whose nominal villain (Vladimir) keeps the supply of beer he refuses to share with anyone in the ice-packed coffin of the departed bass player; whose comic foil (the demented fan/village idiot) has the most poignant scene, bonding with a barber over a love of Hank Williams songs; whose wedding gig denouement involves the resurrection of the bass player, the village idiot's induction into the band and a cactus plant rigged up with a tap so that peyote is quite literally on draught! 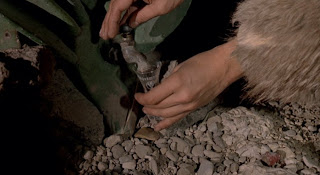 *Chorus: I'm a Leningrad Cowboy / Raising cattle on the Steppes / So pour me another wodka / 'Cause I'm drinking to forget.
Posted by Neil Fulwood at 8:53 PM