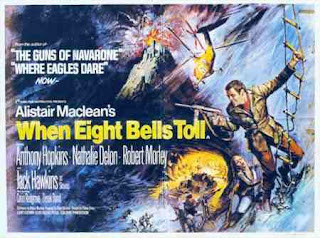 In the late '20s to mid '30s, huge amounts of "quota quickies" were pumped out to satisfy the terms of the Cinematograph Films Act 1927, which stipulated that a certain percentage of all films shown at British cinemas had to be British productions.

I'm convinced a similar piece of legislation was in force between the early '60s and the late '70s, requiring that a certain percentage of all films produced were Alistair Maclean adaptations. Some were big-budget, big box-office affairs such as 'Where Eagles Dare' (already covered on these pages as part of the personal faves project) and the inexplicably popular 'Guns of Navarone'; others, like 'Puppet on a Chain' and 'Caravan to Vaccares', were interchangeable Euro productions that deserve the "quota quickie" comparison.

Then you've got the mid-tier stuff. 'Fear is the Key' has a plank-like Barry Newman in the lead role, but boasts good turns from John Vernon, Ben Kingsley, Ray McAnally and a gorgeous Suzy Kendall, and a terrific, poundingly edited car chase. 'Breakheart Pass' is a weird conflation of Agatha Christie mystery and wild west iconography which, thanks to Lucien Ballard's sumptuous cinematography, has the look of a Michael Cimino film. Or there's 'Force 10 from Navarone', which I personally prefer to its overlong and self-important predecessor. While no-one's idea of great cinema, 'Force 10 from ~' is less talky and more action-packed than 'Guns of ~', with shoot-outs, knife fights and a blow-the-dam/destroy-the-bridge finale that manages to rise above some obvious model work.

'When Eight Bells Toll' slots into this mid-tier. Etienne Perier's direction is largely pedestrian, much of the action indifferently staged, the romantic subplot shoehorned in and devoid of any frisson, and the story twisted into overplotted WTF-ism the way only Alistair Maclean could.

Basically: naval operative Philip Calvert (Anthony Hopkins) and intelligence bod Hunslett (Corin Redgrave) are despatched by spymaster Uncle Arthur (Robert Morley) to Tobermory on the Isle of Mull, to investigate a spate of hijackings which have targetted ships carrying gold (can't you just tell this is a Maclean plot?). Posing as marine biologists, their ship is immediate boarded by "customs officials". Calvert makes them as bad guys straightaway. Later, a couple of locals hand out a beating intended to warn him off. It doesn't work. Uncle Albert, concerned that Calvert's a maverick and contemptuous of his superiors, sends a couple of crack commando types to sneak aboard a ship he's earmarked as the hijackers' next target. When they turn up dead, Calvert wonders if there's any connection to the recent appearance of a flashy yacht belonging to a Greek shipping tycoon (look, I said this was a Maclean adaptation, okay? what were you expecting? subtlety? characterisations that didn't rely on stereotyping?). Unsurprisingly, there is.

It all gets needlessly complicated, with a kidnapping subplot thrown in alongside Calvert's attraction to duplicitous femme fatale Charlotte (Nathalie Delon), whose motives couldn't be more obvious if she had "I'm secretly in league with the bad guys" tattooed on her forehead. 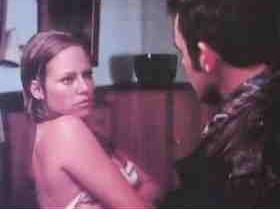 Then Uncle Arthur turns up and the maverick undercover agent and his port-sipping old-school-tie boss are forced to work together.
I guess the intention was that Calvert and Uncle Arthur would provide a sparky comedic double act, but by this time - roughly the mid-way point - Perier has established a fairly dour atmosphere, making brooding use of the rugged Scottish landscape and the dark rolling waves of the North Atlantic, while the action is devoid of heroics or Hollywood veneer (although I stand by my earlier comment about indifferent staging: a fist fight is lackadaisically choreographed, a helicopter crash shoddily effected) and the resulting shift in tone is as out of place as Walter Stott's magnificently over-the-top score.
Striving for the immediacy of Monty Norman's James Bond theme and the urgency of David Shire's 'Taking of Pelham One Two Three' soundtrack, it swerves between them and emerges as a souped-up big band swing-fest. And it kicks in, without any variation or modulation, every time anything remotely actionful happens. A helicopter takes off - BAM! the music erupts. A speedboat zips across the harbour - POW! it's that OTT theme again. It's barmy, intrusive and incongruous - it's genius! The cast is solid. Notwithstanding the ill-judged Calvert/Uncle Albert buddy movie concept, Hopkins and Morley are on fine form. 'When Eight Bells Toll' was only Hopkins' fourth or fifth movie and his first leading role, and he makes mundanity memorable, delivering servicable dialogue as if it were laced with meaning. Lower down the credits, Maurice Roeves as a seat-of-the-pants helicopter pilot, Del Henney as a gun-toting heavy and Jack Hawkins (dubbed by Charles Grey) as the shipping magnate are all value for money.
There's also a brilliantly cold-hearted scene where Calvert, cold-cocking an antagonist, wraps a chain around the man's legs and drops him overboard; a human anchor! Plenty of films would have chickened out and had him dragged back up, still alive, to be handed over to the authorities. 'When Eight Bells Toll' doesn't. The dude gets chucked overboard and stays overboard; he's a goner. Calvert, like Smith in 'Where Eagles Dare', is a typical Alistair Maclean do-or-die man-of-action protagonist. But because the average Maclean hero is utterly predictable doesn't mean he can't be a bit of a bastard.
Posted by Neil Fulwood at 11:02 AM