How Much Wood Would a Woodchuck Chuck? 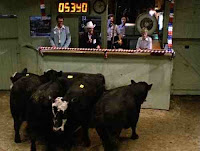 Subtitled Observations on a New Language, 'How Much Wood Would a Woodchuck Chuck?' is a documentary on a cattle auctioneers' world championship that took place in New Holland, Pennsylvania in the mid-70s. As such, it contains long passages of portly Texan or mid-western types with twangy accents talking very fast. Very fast indeed. So fast that although there's no doubt that actual words are involved the overall effect, certainly for the uninitiated (and by the uninitiated I mean anyone who has never bid on a head of cattle), is that of complete gibberish. But gibberish that carries its own rhythms, its own musicality.

Basically, what an auctioneer does is call the opening figure then work it up incrementally - according to bids that may be placed in the form of a raised hand, a lifted auction catalogue or piece of paper, the drumming of fingertips on the leg, or even a movement of the eyes - until a final bid is made, whereupon the sale is confirmed. I've only ever sat in on an auction once, and that was for used cars in Derby in England. Which is a long way from cattle country, and the auctioneer spoke a lot slower. True, all the words ran into each other - "Whaddamahbidonthisnicelittlemotoranyonestartmeatahundredcanahgeddahundred" - but you could still make out what he was saying and how fast he spoke was modulated by how fast and competitive the bidding was.
The contestants in 'How Much Wood Would a Woodchuck Chuck?' (the championship was adjudicated at a live auction, each participant getting little more than three minutes to do their thing) seem to reel off sequences of incrementally increasing figures, deeming a sale made almost at random, while the bidders appear almost to be struggling to keep up! Sheer speed of verbal delivery emerges unambiguously as their raison d'etre. "Fascinating and rather frightening," is how Herzog describes it in his typically calm and reflective voiceover. He speculates as to how church liturgies came about, clearly drawing a parallel but making no bones that the liturgy of the auction room is the language of commerce.
In the film's most humane scenes, Herzog juxtaposes the rampant commercialism of the auction house with a nearby Amish community, finding in their rejection of progress, conflict and competitiveness a lifestyle that, though anachronistic, is entirely laudable. Even for a documentary made thirty years ago, though, this is something of a statement of the obvious. Likewise Herzog's meditations on the hypnotic qualities or the musicality of the auctioneer's art: it's almost a striving to impose meaning when the film says all it needs to by simply recording the motor-mouth absurdity of its subject. It helps that Herzog has one of the most calm and reassuring voices a documentarist has ever been blessed with. Whether he expresses himself in German or English, he speaks with a measured, precisely modulated diction. He speaks slowly.
You might consider Werner Herzog crazy for making a 45-minute film about men who talk unrealistically fast in order to sell cows, most of the dialogue of which is incomprehensible, but it's his subjects - with the possible exception of the eventual winner, the rather personable Steve Liptae - who come off as the crazy ones in comparison.
Posted by Neil Fulwood at 10:36 AM