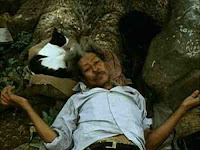 This is the kind of project that, as Paul Cronin points out in his superb and life-affirming book 'Herzog on Herzog' (Faber & Faber, 2002), cemented Herzog's "public persona as a risk-taking madman".

To contextualise: a Caribbean island is being evacuated as a live volcano rumbles and growls and emits noxious fumes in the background. Scientists, logging extreme siesmic activity, are already packing up their equipment and preparing (to put it bluntly) to get the fuck out of Dodge. The island's main township, nestling pretty much right under the volcano, becomes a relic, a memorial, even though opinion as to how long it still has left is uncertain; perhaps only days. Word filters out, however, that one particular individual is refusing to leave. Do you:
(a) shake your head and think dumb fucking guy;
(b) secretly admire the man, finding something self-destructively romantic about his courage/stubbornness/foolhardiness [delete as applicable];
(c) rope in a couple of cameramen, fly out to the island and see if you can get an interview with him or failing that document the death of a deserted community?
If you answered (a), you're normal. If you answered (b), you're normal but you've got the soul of a poet. If you answered (c), you're Werner Herzog. Dragging DoPs Jorg Schmidt-Reitwein and Ed Lachman along with him, our man goes exploring while the volcano foments above him.
He finds a ghost town, but one that still bares traces of occupation: abandoned buildings, their air conditioners and (in at least one instance) TVs left running. Traffic lights continue to operate. The police station is deserted. "It was a comfort to us not to have the law hanging around," Herzog muses, sounding like a film-making bandit. At large in a town that is otherwise the province of animals roaming wild - some of them starving; even dying - Herzog captures eerily poetic shots of abandonment, emptiness, the evidence of a society. Society's clutter takes on a surreal, even slightly macabre element, once that society has withdrawn.
Leaving the silent streets behind them, Herzog, Schmidt-Reitwein and Lachman drive across country, towards the volcano. Let me just repeat that. Towards the mother-loving volcano! Demonstrating a belated approximation of common sense, they beat a hasty retreat as toxic gases drift their way ... Or maybe not. The wind changes and they merrily head straight back!
Shortly afterwards, they find the gentlemen who spurned the evacuation. He's in the company of two other guys and an heroically unconcerned cat. "I am waiting for my death," the man states, without a trace of melodrama or self-aggrandizement; "where would I go anyway?" It's a sentiment his companions echo. All three profess to being unafraid of death. Herzog cuts straight from his interview with them to a shot of the volcano, its roiling vapours beginning to subside.
In what is both the most comic and poignant moment in 'La Soufriere', Herzog intones "The volcano did not explode." His voiceover takes on a borderline regretful timbre. "Never before in the history of vulcanology were signals of such magnitude measured and yet nothing happened." As Wagner booms with magnificent irony on the soundtrack (Siegfried's Funeral March from 'Gotterdammerung'), Herzog admits the film's denouement must perforce be an embarrassment: "a report of an inevitable catastrophe that did not take place".
Posted by Neil Fulwood at 6:31 PM