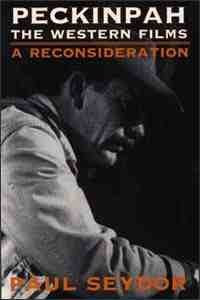 'Peckinpah: The Western Films - A Reconsideration' by Paul Seydor (University of Illinois Press, 1980; revised edition 1997). Scholarly, erudite, rigorously analytical and requiring of the reader that their hearts and minds be fully engaged with the films under discussion, Seydor's 400-page opus is quite simply one of the most important books of film criticism ever published. An affirmation of Peckinpah as a great American artist (Seydor had the courage to publish the first edition at a time when Peckinpah's reputation was at its lowest), this is not just great film writing - it's a profound and deeply cerebral work of literature in its own right. 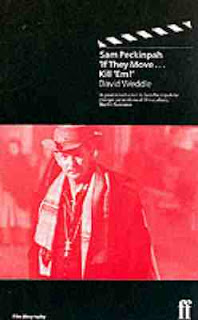 'Sam Peckinpah: If They Move ... Kill 'Em!' by David Weddle (Faber, 1996). Pushing 600 pages, this is everything that a biography should aspire to - meticulously researched, clear sighted and anchored in the interrelationship between its subject's life and creative output - as well as being compellingly readable. 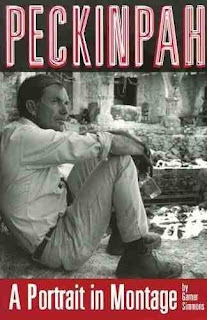 'Peckinpah: A Portrait in Montage' by Garner Simmons (Limelight Editions, 2004 - 3rd edition). Acclaimed by David Weddle as "still giving us the fullest documentation of the making of each of the films". (Thanks to J.D. at Radiator Heaven for the heads up on this title. Simmons knew Peckinpah while he was alive which, as J.D. points out, "gives his book considerable credibility".) 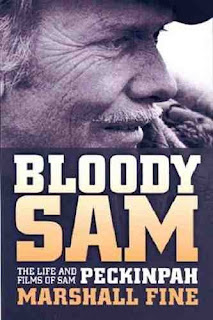 'Bloody Sam' by Marshall Fine (Miramax, 2006 - reissue). Available again after a spell out of print, Fine's book - as the title suggests - is concerned with Peckinpah's public image as a hard-drinking, hard-brawling and generally hard-boiled badass. Which is fine (as a wise man once said: when the legend becomes fact, print the legend), but this does the director few favours in terms of objective re-evaluation. 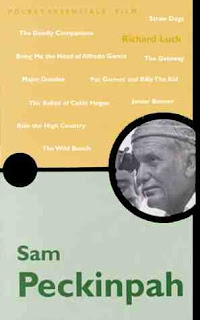 'The Pocket Essential Sam Peckinpah' by Richard Luck (Pocket Essentials, 2000). Succinct and often colloquial, Luck nevertheless finds enough room within the slim perameters of a Pocket Essentials title (about 100 pages) to identify the key thematic concerns of Peckinpah's filmography, fill in some entertaining background detail and deflect a few of the brickbats (violence for its own sake; misogyny) that are still hurled at Sam's films. 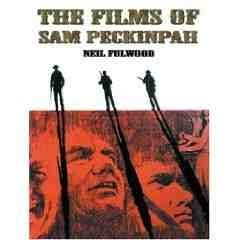 'The Films of Sam Peckinpah' by Neil Fulwood (B.T. Batsford, 2002). It's bad form to self-publicize, but while it's by no means the best bit of Peckinpah-lit you could add to your bookshelf (that honour goes to Seydor with Weddle coming in an honorable second), I'm mighty proud of my contribution to the small canon of books on Peckinpah. Read this and Richard Luck's title for a solid introduction, then move on to the real meat of Seydor, Simmons and Weddles' books.
Posted by Neil Fulwood at 5:09 PM

Congrats on being published -- that's quite an impressive feat. Are the capsules you've been writing indicative of what's in your book? Just curious.

Thanks, Troy. My book was published seven years ago and I made a deliberate attempt, when I embarked on the project, not to revisit it; to respond to the films anew. I cheated a bit in that I wrote the biographical overview based on my notes from the book.

Out of interest, after reading your comment, I revisited the sections on 'Ride the High Country' and 'Major Dundee' in the book and found that, seven years down the line, my take on the films is pretty much the same. In a couple of places, I'd even used the same turns of phrase in describing scenes or expressing my opinions.

Generally speaking, though, the analyses in the book run about twice as long as what I've written for the blog. The chapter on 'The Wild Bunch' is about 6,000 words.

Mr. Fulwood: Many thanks for your generous remarks about my book on Peckinpah. I have always considered myself fortunate to have found a great subject which I could love and respond to with such passion and enthusiasm, a subject that fully engages the mind as well as the heart. Sam himself used to say that it was "a privilege to work in motion pictures." Once I started working in motion pictures myself I understood what he meant. But I before then I knew a similar privilege in my work as a critic and a scholar: having a great subject in this singular artist and his peerless films. Your "Agitation of the Mind" blog honors both the artist and his work.

Thanks for your comment, Mr Seydor. Your book was one of the cornerstones of my research and critical understanding of Peckinpah's work while I was writing my own book on Peckinpah a few years ago. It's been a labour of love following up with this month's tribute on the blog. Like you, I find myself responding to Peckinpah's work more deeply and passionately than that of any other director I could name.

Thank you again for your kind remarks.

There is no need, by the way, for you to apologize putting your own book up here: it's a very good overview of Sam's work with respect both to the films themselves and to several of their leading themes and motifs. By the way, I have to ask: where did you find the photograph of Ernest Borgnine with Lucien Ballard on Ride the High Country? I had no idea Sam had any association with Borgnine prior to The Wild Bunch. I wonder why he was there.

I must confess that this was a misprint that didn't come to light until after the book had gone to press. The photograph was from a private collection and not connected with 'Ride the High Country'. I'd asked the publishers to confirm with the curator of the collection which production the photograph was taken on. Neither he or I were able to conclusively identify it and I rewrote the caption to remove any reference to the specific film. Unfortunately the original caption was printed and the copy editor inserted 'Ride the High Country' as that was the film under discussion in that particular chapter.

Neil: Congrats on getting published! That is definitely my goal and I hope to do what you did for Peckinpah for Michael Mann. You're definitely an inspiration!

Thanks, J.D. From what I read in your Michael Mann blog-a-thon, I'd say you have as much chance with your book on Mann as I did with mine on Peckinpah.

The background to the book is that, about ten years ago, I came to the point where I'd had a moderate degree of success in the small press as a poet and none whatsoever as a novelist (I lacked the discipline), when a friend suggested that I stopped talking about movies all the time and start writing about them instead.

Inspired by the BFI Classics single film studies, I wrote an 80 page treatise on Powell & Pressburger's 'A Matter of Life and Death' and started submitting to publishers on spec.

B.T. Batsford (London) - now Chrysalis Books - were the only people who didn't throw the MS straight back at me with a standard form rejection letter. They said they weren't interested in single film studies, but was there a director whose entire body of work I wanted to write about?

There was only one choice, really. I submitted a sample chapter on 'The Wild Bunch'. They liked it. I found myself signing a contract to deliver 90,000 words in nine months and - to put it bluntly - shitting a brick because I'd never undertaken a project this large and, more importantly, timebound before.

There's things about the book I sometimes wish I could redraft or take another shot at; some of the writing is self-congratulatory. But on the whole, I'm incredibly proud of it and hope that it communicates at least some of what makes Peckinpah's work so immediate and inimitable.

Best of luck with your book on Michael Mann. I'm sure you'll write it for yourself and Michael Mann and the love of his films - in other words, from the heart. You've got your first buyer in the UK right here as soon as it sees print.

Thanks for the encouraging words, Neil. I have the guts of my book done. It just needs some more analysis and lots of copy editing before I want to shop it around. I figure that I'll maybe try University presses here in the US and also check out some of the publishers of some of my fave film books and go from there.

Thanks for sharing your experiences. That's a great story and so cool that it led up to you writing about Peckinpah's entire body of work.

University presses would be a good starting point - after all, Paul Seydor's book is published by the University of Illinois Press.

Making a list of publishers of film books was how I started when I'd finished the Powell & Pressburger treatise; I simply browsed in a couple of bookshops and cased the library, wrote down all the publishers who had film criticism on their list and blagged contact addresses off the internet.

I really hope that someone picks up your Michael Mann book. From what I've read on Radiator Heaven, you have a deep appreciation and understanding of film allayed with an incisive and very readable prose style. Best of luck!