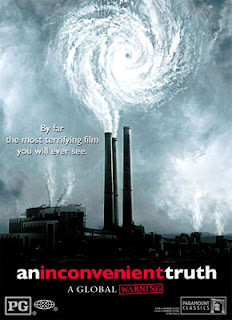 FULL DISCLOSURE: before I saw ‘An Inconvenient Truth’ at the cinema in September 2006, I was a sceptic. I gave little thought to environmental concerns and was of the opinion that global warming was just another media scare story. Davis Guggenheim’s documentary swung a wrecking ball against my apathy and non-understanding and my attitude to the media now is that they don’t talk about environmentalism enough.

Full disclosure, too, on the provenance of this post. The eight paragraphs that follow are simply a copy and paste of the review I wrote for my erstwhile blog MovieBuff three and a half years ago. When I selected ‘An Inconvenient Truth’ for the Personal Faves project – and when I hit upon documentaries as one of the Operation 101010 genres – it was my intention to reappraise the film and write an entirely new piece. Looking back at that original write-up, though, I realised that what I wouldn’t be able to capture in a new article was that sense of the scales falling from my eyes; of how much of a wake-up call the film was to me on personal level. So please excuse the slightly breathless prose style, the contextual references to the Bush administration (the Demon Dubya was still in power at the time), and the stupidly obvious mistake in the first paragraph (it’s a Keynote presentation, not PowerPoint – d’uh!); what follows is how I felt in September 2006, just a couple of hours after seeing the film: 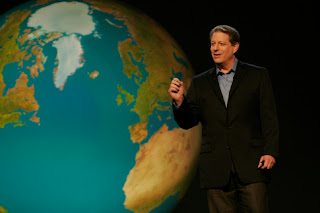 On paper, it doesn’t sound like much of an evening at the flicks: 97 minutes of a US politician giving a PowerPoint presentation about global warming, with a few bits of newsreel footage spliced in. But don’t be put off.

‘An Inconvenient Truth’ is a gripping and thought-provoking documentary about Al Gore’s campaign – although a better word would be crusade; the man is passionate and dedicated – to promote understanding of the global climate crisis. Tirelessly travelling from city to city, state to state, his goal is to raise public awareness, eradicate the myths surrounding global warming that have been propagated in the popular press, and – crucially – to encourage his audience that the solution can be social, not political.

Gore’s lack of faith in the Bush administration isn’t just sour grapes at his defeat in Florida, but based on hard-won personal experience of the political process. America has still not ratified the Kyoto Treaty – the only major country (apart from Australia) not to do so. Oil and big business hold sway over policy-making. Gore relates the story of Phillip Cooney, a lobbyist for American Petroleum who was appointed as Bush’s environmental advisor … a conflict of interests by any standards! Cooney’s White House career came to an end after a whistleblower leaked documents that proved he had censored reports warning of the growing climate crisis. The day after Cooney resigned, he went to work for Exxon Mobil.

But of course, the basic facts of global warming are the very things big business doesn’t want to face up to (the ‘inconvenient truth’ of the title): energy consumption and fossil fuels contribute to the huge quantities of CO2 in the atmosphere. Gore charts a direct correlation between CO2 levels and temperature increase. Melting icecaps and glaciers are only part of the problem; extreme weather conditions such as hurricanes and typhoons have also increased dramatically in the last decade, culminating in last year’s Hurricane Katrina.

The evidence is incontrovertible: a simple graph shows how drastically levels have risen since the 1970s. A projection, based on current increase, demonstrates that within 45 years, the effect on Earth’s atmosphere will be one of irreversible ecological damage. Gore’s message is clear: we have a decade in which we can do something; counter the problem; pulls ourselves back from the brink. It sounds bleak, but Gore remains confident that changes can be made.

This is what it will take: as many people as possible taking personal responsibility in a matter of global morality. Will it happen? I can only offer my response to the film:

‘An Inconvenient Truth’ has changed the way I think about certain issues. It has corrected my misunderstanding, based on erroneous and scaremongering reports in the media, of the causes and results of global warming. It has shown me that, on a personal basis, I can make a change.

We all can. Go and see the film, buy the book that accompanies it – and you’ll already have made a start.

I saw this one in a double bill with Leonardo DiCaprio's The 11th Hour, you kind of feel powerless in a way to the way things are set up in the world.

The only ones who can make a significant change -the governments of the world- dont give a rats ass about any of the environmental issues, their only concern is how much gas they can sell to the people. Its sickening.

On a smaller scale we can do things in our personal lives, but nothing is going to change until they dont make those big changes they have to make. #1 Stop making gas fueled cars!

Then I saw Who Killed the Electric Car and was further depressed. I mean, something that might actually make a significant change was stopped dead on its tracks!

They are doing it now by attacking Toyota and their hybrid car, The Prius. The amount of press they have given to "how unsafe" the Prius is, lets us see what their intentions are: eliminate the Hybrid cars! Why? Because they loose so many millions in gas dollars.

Hybrids cut their earnings by a huge margin! So what do they do? They make a big deal about Toyota and how unsafe and about how worried those who have Hybrids should be.

Its sick, but I know a huge amount of people are not going to be buying Toyotas for a while cause they believe what ever appears on CNN or their Yahoo News page. Its sickening and it makes one think just where the hell this world is going to end up if things continue the way they are.

And Im not gonna start talking about garbage...I mean the garbage problem is yet another issue...recycling should be a law EVERWHERE!!

In the UK, the government does nothing about the environment. The only time they ever mention the word, it's as a smokescreen to introduce some new stealth tax. In my home town of Nottingham, there's a city centre levy coming into force in two years which will affect parking spaces at companies' premises who have more than eleven designated staff parking spaces. This is apparently to fund an extension to Nottingham's tram system which in turn is supposed to promote the use of public transport. Problem is, there are plenty of places not serviced by the tram system, nor is the existing tram service effective enough to deal with the rush hour commute. Also, prices for tram travel have gone up and up since the service was introduced.

The Toyota controversy smacks of media-generated scaremongering. At the end of the day they are recalling cars because of a possible technical fault - a technical fault, moreover, that could easily have affected non-hybrid models. I've seen 'Who Killed the Electric Car' as well and it makes you wonder what movements are afoot to do down the hybrid for similar reasons.

If governments were serious about the environment they would work with motor manufacturers towards a replacement of gas-fuelled cars by hybrids and an embrace of alternative fuel options. They should be funding research and offering tax breaks to companies and research agencies willing to develop hybrid or alternative fuel solutions, not just levying heavier taxes while the use of unsustainable fuels continues unmitigated.

And yes, recycling should be legislated. There's no reason why everyone shouldn't recycle.

'An Inconvenient Truth' made an impression on me - sadly the message doesn't seem to have got through to the very people who ought to be in a position to legislate properly and make decisions based on a sustainable future instead of decisions made on the profitability of levies and taxes.

Not only Toyota is under fire, I just read in the paper today that now they are bad mouthing Honda vehicles because their air bags might open up to quickly and hurt people.

I mean, these just seem like really silly excuses to tarnish the name of foreign companies as well, and make consumers buy american cars instead of japanese. Because, you know, Japanese do sell a hell of a lot of cars, and to top things off, they are selling Hybrids which the U.S. officials (thats the term they use on the news papers) dont like it.

I saw an article the other day where Toyota is saying that its all a scam and that the US is just trying to damage Toyotas good name, which makes perfect sense to me considering the reasons why they are requestin recalls.

Lets say there is no break failure on the Priuses, the damage is already done just by doing that bogus media blitz they did a couple of days ago.

Besmirching Honda just because they're Japanese as well does smack of a politically-driven campaign. The US manufacturers and the oil industry successfully shut down the electric car because it threatened markets and profitability. It stands to reason they'd want to see the hybrid go the same way. Here's hoping the Prius weathers this storm of negative publicity. A friend of mine drives one, he's had it a couple of years and has nothing but good things to say about it.

Heres hoping people will recognize something thats good for the environment and keep on purchasing it. Before the whole breaks thing, Prius was one of Toyotas top selling cars.