“Advertising has us chasing cars and clothes, working jobs we hate so we can buy shit we don’t need. We’re the middle children of history, men: no purpose or place. We have no great war, no great depression. Our great war is a spiritual war. Our great depression is our lives.”

No, wait, back up a bit further. There’s this guy, Cornelius (Edward Norton), assumed name, but what the hell, he’s the guy telling the story so let’s just call him The Narrator. Corporate guy, suit, briefcase, flight coupons, condo full of designer furniture, by his own admission “a slave to the Ikea nesting instinct”. He works for a car manufacturer, our boy, and his job involves travelling the length and breadth of the States examining car wrecks to determine if the number of similar models in the field times the possibility of the fault recurring times the average out-of-court settlement is less than the cost of a recall; if so, no recall.

The Narrator, uh, narrates this job spec to a fellow passenger during a domestic flight. She looks alarmed. Our boy, in the meantime, banks on the plane banking as a prelude to a mid-air collision. And why not? “Life insurance pays out triple if you die on a business trip.” Fortunately (or otherwise) our boy doesn’t cark it during a routine flight. Instead, he meets pragmatist, soap manufacturer and wannabe pugilist Tyler Durden.

After a conflagrant misadventure afflicts his Ikea-lined condo, our boy moves in with Durden. Chez Durden is a des res for people who deem “shithole” more important in estate agent (ie. realtor) terms than “no upward chain”. This is immaterial. The terms and conditions of relocation to said locale is that our boy hit Tyler as hard as he can. Our boy’s hesitant. Tyler’s insistent. The rationale? What do you know about yourself if you’ve never been in a fight.

They trade blows in a pub car park. This leads to mass brawling in said pub car park. The whole scene goes underground (literally) in the basement of said pub. The landlord, Lou, objects … briefly. Next thing you know, everyone who’s working a shit job and getting no satisfaction out of life is turning up, losing the tie, adhering to the no shirts/no shoes rule, and finding more than a soupçon of validation in beating the ever-loving shit out of each other.

“No fear. No distractions. The ability to let that which does not matter truly slide.”

Next thing you know, there’s homework assignments and priests are being provoked into exchanging blows, corporate art is desecrated, computer shops blown up, tower blocks with smiley faces daubed on their glass-fronted façade belch flames, hoardings are appropriated for public (mis)information sloganeering, and roof-top pigeons are overfed so that the BMW dealership below is beset with guano all over its top of the range models.

‘Fight Club’ is a hyper-stylized, brilliantly constructed, funny as fuck howl against the general piss-awfulness of modern life. It is agit-prop and protest art. It is the big fungoo administered to the false gods of contemporary culture, a corrective to the slavering press panting over celebrity scandal and the profusion of reality TV non-entities. Put the latest ‘X Factor’ media whores up against Norton and Pitt and I guarantee a no-contest smackdown. 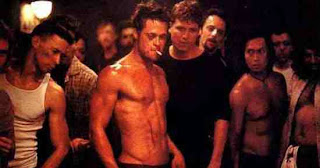 “You’re not your job, you’re not how much money you have in the bank, you’re not the car you drive, not the contents of your wallet, you’re not your fucking cactus. You are the all-dancing, all-singing crap of the world.”
For me, the film turns (in the sense of switching from I-hate-my-job wish-fulfilment to something more meaningful; the switch from audience perception to late-in-the-day revelation comes significantly later) when Durden bursts into a convenience store and bustles the clerk out back at gunpoint. He demands the poor unfortunate’s name and wallet. Both are given over post haste. Durden queries the clerk over an out-of-date student card; turns out the lad wanted to be a vet but dropped out because the course required too much studying. “I’m gonna check in on you,” Durden informs him; “if you’re not on your way to being a vet in six weeks, you’re dead.” It’s a pivotal scene both in terms of how the narrative develops (it gets progressively darker) and in gauging audience complicity. Your appreciation of ‘Fight Club’ depends on your response to this scene: do you wince at the Tyler Durden’s treatment of the poor, gibbering unfortunate? Or do you applaud that Tyler Durden has rescued him from a life of subservient drudgery; has in fact liberated him
I fall into the latter category. This may have something to do with having watched the film last night, a good few drinks under my belt, after a shit day at work that included a royal shafting courtesy of the management. Hence the wish-fulfilment aspect of ‘Fight Club’. The scene where The Narrator beats himself up during a one-to-one with his prissy company-man boss is at once the greatest scene of physical comedy this side of a Charlie Chaplin movie and perversely inspiring. Indeed, the whole of ‘Fight Club’ is perversely inspiring. Even when some of The Narrator’s sloganeering is quite obviously that – sloganeering (and whiny with it) – it touches enough of a nerve that you can understand exactly where Pitt and Norton and David Fincher and Chuck Palahniuk (whose debut novel it is based on) are coming from.
I have read reviews by intelligent commentators on film, many of whose opinions I wholeheartedly agree with, who find ‘Fight Club’ juvenile, facile, puerile and emotionally and intellectually hollow. I’m guessing they’ve never wanted to take a swing at their boss, trash their office and shrug off the responsibilities that keep the majority of us tied to our desks and our cubicles and our contracts of employment. I have – on more than one occasion. But because of those aforementioned responsibilities, I’ve kept myself in check.
Thoreau once said “the mass of men lead lives of quiet desperation”. ‘Fight Club’ is the movie that recognises every one of Thoreau’s faceless, nameless, disaffected masses. ‘Fight Club’ speaks out for them, flips off authority on their behalf, and offers catharsis without the detrimental side effects of getting sacked or spending a night in the cells.

(Having said that, I reserve the right to turn up to a Senior Management Team meeting one of these days in a state of bruised dishevelment and bare bloodied teeth in a horrible gargling hiss at some cornflower-blue-tie wearing dweeb of a boss.)
Posted by Neil Fulwood at 8:24 PM