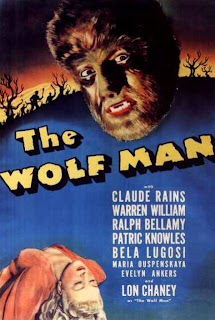 Over the last couple of decades, the great Universal monster-protagonists have been subjected to big-budget, high-profile and generally disappointing remakes: Francis Ford Coppola’s ‘Bram Stoker’s Dracula’ (1992) was entertaining but overblown, Kenneth Branagh’s ‘Mary Shelley’s Frankenstein’ (1994) was anaemic – and doesn’t the pompous shoehorning of the author’s name into the title tell you something? – and Stephen Sommers’ ‘The Mummy’ (1999) and ‘The Mummy Returns’ (2001) were just plain execrable.

Now ‘The Wolf Man’ gets the treatment, with Joe Johnston calling the shots, Andrew Kevin Walker co-scripting and a quality cast headed up by Benicio del Toro, Anthony Hopkins and Emily Blunt. 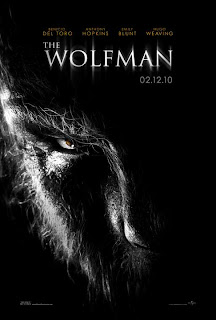 I had my doubts, but an enthusiastic review by Francisco at The Film Connoisseur has heightened my anticipation and I’m looking forward to taking in a screening of the film next week.

In the meantime, my guest review of George Waggner’s 1941 original is online at The Death Rattle.

And while I’m on the subject, has anyone noticed the similarity between the soon-to-be-iconic image of Emily Blunt on the remake’s poster art and Kelly Reilly in ‘Eden Lake’? 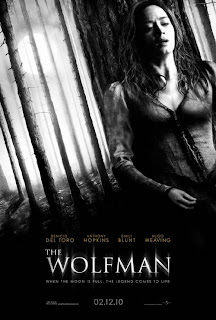 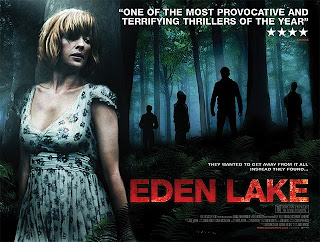 Could it be that werewolves are the new chavs?
Posted by Neil Fulwood at 10:47 AM

Van Helsing was trying to be too many things at the same time. Plus that whole storyline simply sucked ass. Dracula wants to have babies with his brides? Dracula has never worried about having babies! All he has to do is bite other people and they are his sons and daughters! Jeez...

'Van Helsing' was a complete disaster. Like you say, the storyline made no sense at all and throwing werewolves, Frankenstein's monster and Jekyll & Hyde into the mix along with Dracula just made the whole thing too cluttered. Plus Stephen Sommers seemed to be more interested in set design than storytelling.

I'm looking forward to seeing the new 'Wolfman' next week. Hope you enjoy my review of the original over at The Death Rattle.

To establish my own perspective in anticipation of the new film: I really liked the Coppola Dracula apart from Keanu Reeves. I thought the Branagh Frankenstein was one of the worst films of the 1990s. I actually like the Sommers Mummy films as pulp-style entertainment despite their excesses, and I like Returns the better of the two for its kick-ass Ancient Egypt sequences. But Van Helsing was just as you describe it, Neil, and it exposed the director's faults in a way that left me questioning my admiration for the Mummy films. Right now, I worry that the new Wolf Man team may have failed to learn Van Helsing's lesson that more is less, but I'm feeling the tug of legend just the same.

Hey Sam, I dont think you need to worry about The Wolfman, its classy, its gothic and its old fashioned but with some modern day gore and effects. Never boring! LOVED IT!

I just want to thank you Neil for the very entertaining fifteen minutes I got when I typed, Chav into Urban dictionary.

Thanks again for the guest write-up, Neil. And yes its best that we do not speak of Van Helsing 'round these here parts. I plan on checking out Francisco's review but I'd like to see the movie first. I've heard some surprisingly not-so-negative things about it so far. Mostly "it's fun".

Sam - for me, the sole pleasure of 'The Mummy Returns' was Rachel Weisz graduating from set decoration to kick-ass heroine.

Bryce - there's a localised chav infestation where I live. Believe me, werewolves would be more personable and nicer to look at!

Aaron - my pleasure, I enjoyed doing the review for The Death Rattle. Look forward to comparing notes once we've both seen the remake.