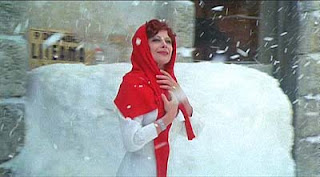 A heady blend of ribald humour and arthouse aestheticism, Fellini’s ‘Amarcord’ is an evocation of small town life in 1930s Italy where a mischievous troupe of schoolboys lust after a buxom tobacconist (and I’m talking the kind of figure that makes Pamela Anderson look anorexic); where same recalcitrants interrupt a maths class by threading an expanding tube of paper from the back of the classroom, under row upon row of desks, until it’s just short of the blackboard at which the teacher is labouring, whereupon one of their number micturates through it, the tube swiftly retracted upon completion; where Volpina (Josiane Tanzilli), the good-natured but insatiable town hooker, goes touting for business at a building site only to be moved along by a foreman who prefers his labours to compose poetry than chase after women; where a man let out of an insane asylum for a day trip takes to the top branches of a tree, repelling all who attempt to approach him with stones, and proves himself of the same mindset as the builders, demanding of the fields, barns and farmhouses that stretch off into the distance, “I want a woman!”; where local femme fatale Gradisca (Magali Noël) turns heads as she shimmies through the town square, a vision in red, en route to the cinema to sigh over Gary Cooper; where the quiet streets can at any moment erupt into boisterous activity as a political rally ends in gunfire and arrests or a motor race detours through the town; where the townsfolk en masse board pleasure cruisers and paddleboats and spend a long evening edging into night bobbing on the choppy waters just to watch a liner from America steam past; and where the shadow of fascism darkly encroaches and one poor unfortunate finds himself interrogated and forced to consume castor oil following an ill-advised political remark. 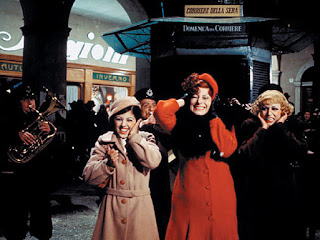 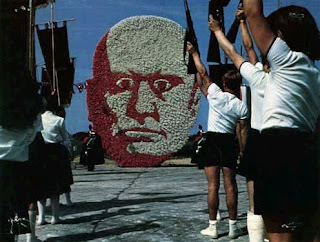 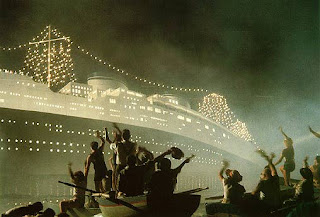 ‘Amarcord’ (which means “I remember”) contains all of life and absolutely no plot. Its depiction of those small and quirky moments that invariably form themselves into the clearest of memories is deeply nostalgic, and ‘Amarcord’ rings as true to someone who grew up in England in the 1970s as it must do to anyone who came of age in the time and place Fellini focuses on. And yet it is completely unrealistic, as obviously a movie movie as anything by Tarantino, with a bicycle-wheeling lawyer blithely breaking the fourth wall everytime he wanders into shot, tipping a wink to the audience and proffering another avuncular anecdote.

Indeed, ‘Amarcord’ is the cinematic equivalent of a raconteur propping up the bar and leading his audience through an interlinked sequence of tall tales, none of which have any real point or meaning but are delivered with such panache and sly wit that their very telling is the raison d’etre. It takes a special talent to achieve this verbally, a rare one to do so in writing and the requirement that one is an honest-to-God genius in the medium of cinema. ‘Amarcord’ is directed by Fellini. I rest my case.
Posted by Neil Fulwood at 9:21 AM

Agree with you Neil, this movie is bursting with life, like many of Fellini's films.

They go at a breakneck pace from one scene to the next, you feel like you have to keep up with the film, running after it.

It reminded me of La Dolce Vit and Nights of Cabiria in that sense, the non stop running from memory to memory, situation to situation in Fellini's head.

This thing about the film not having story, and instead simply shows us a lot of unrelated memories and situations is something he tried again in Roma, but wasnt as successful with in my opinion. Roma simply got to incoherent for me, and is my least favorite Fellini film.

Still, even though its a lot of stories and memories strung together, what pulls them to coherence is the fact that they all happened in one place: Fellini's life. An Italian boy raised during a certain point in time, in history. Im sure we could each make a movie like Amarcord. Of course, each movie would be entirely different.

This film is Fellini's Ode to his own memories.

Neil, contra the Connoisseur I like Roma almost better than Amarcord. The earlier film has imagery that, to me, was often more powerful and evocative than Amarcord's nostalgia. Watching them in sequence, you can see Fellini assimilating the liberating influence of plotless mondo movies (plot, by comparison, is an anchor dragging on La Dolce Vita) and evolving his own form of more personal expression.

Hey Sam, its not that I hated Roma, because I think it encapsulated everything that is Rome of the 70s...Fellini was doing a film that centered more on visual poetry then plot, and I get that, but I didnt personally enjoy it as much as his plot driven films.

I liked Roma for different reasons (how cool was that crazy nun fashion thing?) but not as much as his earlier films.

Francisco - thanks for your comment. I knew from your 'Nights of Cabiria' review that you connected with Fellini's work. Your comments here leave no doubt. I'm hoping you'll feature more Fellini on The Film Connoisseur. I've not seen all of his films by a long chalk and I think I could gain a lot from your opinions and recommendations.

Sam - I've only seen 'Roma' once before, quite a few years ago, whereas 'Amarcord' has been a favourite of mine and a staple of the DVD collection for some time. I'd need to get hold of a copy of 'Roma' and sample it again, perhaps watch 'Amarcord' and 'Roma' back to back, before I come to a decision. In fact, I think I need to watch more Fellini period.

I do love Fellini's films, they have a special thing about them...whats it called oh yeah - a brain! Also, his films are pure art. Its that mix of both art and themes that I love so much. He doesnt sacrifice one or the other.

Another interesting one to watch Neil; is Juliet of the Spirits, his first color feature! It also stars his wife Gulieta Masina.

One of my favorites as well. I like watching it with I Vitelloni.

You might find yourself pleasantly surprised by Roma Neil.

It goes on a bit, but well that's the nature of the beast.

Also worth a look are Fellini's contributions to Boccaccio 70 (the one with the giant Anita Ekberg) and Spirits of the Dead (with Terrence Stamp). Personally, I need to work backward and forward from the middle of the director's career, Amarcord being as late as I've gotten so far.

Francisco - I saw 'Juliet of the Spirits' a few years ago. Audacious piece of casting, Fellini having his wife in the lead role since that might lead people to think Juliet's screen husband - a none-too-subtle philanderer - is a stand-in for Fellini himself. Masina's performance is winning, and the terrific scene where her party-girl neighbour tries to set her up with a young stud only for a vision of the Virgin Mary to intrude on the proceedings is a neat counterpoint to the opening shot of 'La Dolce Vita' where a statue of Christ is conveniently helicoptered out of the film so that no such religious/moral considerations intrude upon Marcello Mastroianni and co's chic nihilism.

EDJ - I'll definitely make a point of revisiting 'Roma' soon. In fact, I might go on a bit of a Fellini spree after the next paycheque.

Sam - recommendations noted with thanks.

Hey Sam, I recently reviewed Nights of Cabiria, its such an awesome Fellini movie, you should make it your next Fellini watch! I doubt you will be dissapointed, I was so pleased with that movie, heres my review for it if you are interested:

I will be watching Bocaccio 70, Ive been meaning to get to it!

You know Neil, Ive noticed the same thing myself. Fellini's films were semi-autobiographical, so in a sense, he sacrifices himself and his personal life through his films.

This is a theme that is addressed in 8 1/2, when he is watching the dailies he had filmed and his wife felt like she just wasnt that important to him. Im sure that came out of his real life experiences.

Same thing with Juliet of the Spirits. But then again, what happens between men and women has always been a favorite theme of his.

He does in a way say "I love women, so dont blame me for being such a womanizer! I worship women, Im an artist, deal with it!" but also, he shows his tender side in that scene in 8 1/2 when he locks away all the women of his life, for the love of his wife.

I love how personal he gets on his films.

Agreed: it takes great artistic confidence to sublimate oneself completely into the art. Fellini's life was definitely in his films.

I also love about 'Juliet of the Spirits' that it is such a celebration of the feminine. Fellini certainly loved women and the heroines of his films mirror this.