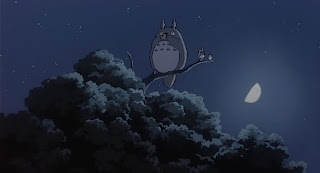 If I’d seen ‘My Neighbour Totoro’ two years ago when I drew up the Personal Faves list (with its caveat of two films per director maximum) I would have included it in a heartbeat. As it is, I selected ‘Spirited Away’ and ‘Howl’s Moving Castle’ to represent Miyazaki’s oeuvre.

The more I’ve explored the Studio Ghibli output (mainly at my wife’s urging: ’twas she who introduced me to anime), the more I’ve come to regret including ‘Howl’s Moving Castle’ on the PF list. Sure, it’s a great film – and one of the few Ghiblis to benefit from its dubbed English language soundtrack, mainly thanks to Billy Crystal’s best work in ages as the voice of the fire demon Calcifer – but I’ve come to realise that I much prefer ‘Porco Rosso’ and ‘Kiki’s Delivery Service’ to ‘Howl’s Moving Castle’. And based on just one viewing, I have no hesitation in ranking ‘My Neighbour Totoro’ as one of the jewels in Studio Ghibli’s crown.

My only reservation over Miyazaki’s work has been a tendency, in just a very few films, to over-earnestness that threatens to render tone and pace sluggish even as the visuals soar. A very minor quibble, though, particularly when those visuals are just so damn gorgeous.

‘My Neighbour Totoro’ is Miyazaki’s gentlest, simplest, most lyrical film. The plot hardly matters (but just for the record: pre-teen Satsuki and her four-year-old sister Mei move to the country with their father while their mother recuperates in hospital; Mei meets the spirits of the forest; said spirits come to the rescue when Mei gets lost after an argument with Satsuki; the end) – what is important is the detail, the evocation of childhood and the countryside, and the life-affirming reconciliatory final sequence. 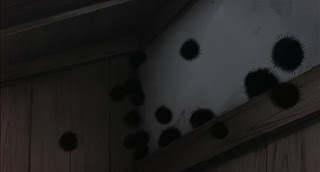 … whom you may recognize from ‘Spirited Away’) who occupy the nooks and crannies and rafters of the family’s bath-house. They flee whenever Mei comes near them. Determined to sneak up on them, she inadvertently discovers the existence of other creatures. These guys, to be exact: 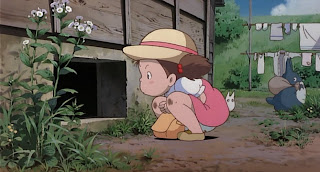 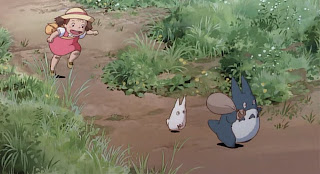 Like the soot gremlins, they beat a hasty retreat. Mei laughingly pursues them through the forest. The forest deepens; trees seem closer together; branches interlace. But none of this scares Mei or detracts from her innocent delight in discovering the creatures and chasing playfully after them. Emerging into a clearing, she encounters Totoro. 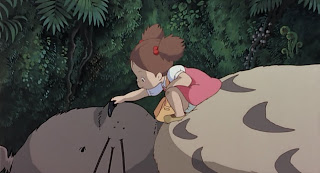 One of the most lovable aspects of ‘My Neighbour Totoro’ is how completely it celebrates childhood. Satsuki and Mei’s father is good-natured and attentive; he loves his children but isn’t over-protective. When Mei talks about Totoro, he doesn’t dismiss her claims as the product of her imagination but tells her she was lucky to have met one of the spirits of the forest. He also instills in his daughters an appreciation (and respect) for the natural world. Environmentalism is a key theme in Miyazaki’s work, but whereas films like ‘Nausicaa of the Valley of the Wind’ and ‘Princess Mononoke’ are intense and challenging in the way they make their point, ‘My Neighbour Totoro’ incorporates the theme in a very genial and lyrical manner.
Mei’s innocence, exuberance and delight in the smallest of things is mirrored by Totoro himself. A lovely scene has Satsuki and Mei waiting for their father at a bus stop. Mei, tired from a long day, has had a piggy-back ride from Satsuki and is falling asleep even as she clings to her sister. Despite a heavy rain, Satsuki uncomplainingly waits at the stop. From beneath her umbrella, held low so that it covers both herself and Mei, she sees someone take up position next to them. Someone large, furry and with claws. As Mei did before her, Satsuki makes the acquaintance of Totoro. The creature (I was about to type “monster”, but a less monstrous ten-foot clawed being I can’t imagine; even Sully from ‘Monsters Inc’ is edgier than this guy) has a leaf on his head, from which the pooling raindrops plop onto his nose. This would probably annoy most of us. Totoro seems to like it. Satsuki passes Totoro a spare umbrella and mimes to him how to use it. Totoro gets the picture and hoists it above his head. The leaf/raindrops/nose scenario is consequently curtailed, much to Totoro’s puzzlement. The rain patters on the umbrella. The noise perks his senses. Then a much larger, denser drop of water detaches itself from an overhanging tree branch and impacts on Totoro’s umbrella with a thud. He’s delighted. It happens again. Totoro emits a joyous roar, throws out an arm and leaps into the air. He comes back down heavily and a cascade of pooled rainwater showers down from the leaves. The commotion wakes Mei, who grins in delight that Totoro has joined them. 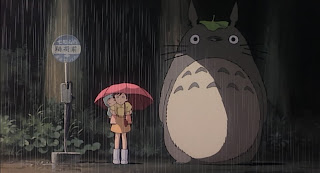 It’s a simple – almost wistful – scene, devoid of narrative purpose but rich in detail (Miyazaki lingers on the single light that sheds a dim yellow light into the rainswept night; on the pools of rainwater; on a frog that wryly observes Totoro from the other side of the road) and eloquently nuanced with only barest of dialogue. It concludes in abrupt burst of energy as Totoro’s bus arrives. The bus is a cat. Yes, you read that right. No, I didn’t make it up. I have the screengrab to prove it. 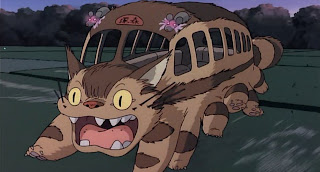 Totoro and the cat-bus rally around Satsuki when an unparalleled argument between the sisters, exacerbated by concerns that their mother has suffered a potentially life-threatening relapse, sees Mei disappear into the countryside, trying to walk to the hospital. While this sequence might seem like the only real dramatic incident in the film, it’s actually the culmination of several downplayed but poignantly observed moments that demonstrate how Satsuki is on the cusp of adolescence, particularly in her slowly developing friendship with a boy from a neighbouring household, while Mei remains a wide-eyed and effusive child, fascinated by the world around her and all the magic and mystery it holds.
It is Miyazaki’s refusal to overstate this aspect (much as he refuses to over-sentimentalize the almost obligatory happy ending) that makes ‘My Neighbour Totoro’ the purest, warmest and most immediately likeable of his films.

I love this one, the quiet moments, the weird creatures in the woods, and the animation, as in all of Miyazakis films is awesome.

One thing I like about Miyazakis films is that in a lot of them, theres this happy aura all through out. Not a lot "bad" things happen. There are threats, even they seem kind of harmless at times.

Though two of his films are a bit more serious: Nausicaa and Mononoke, both of them are extremely similar in themes and tone. The villains are a bit more aggressive. But in all others, the tone is so light, I love that about them. Totoro is like that as well as Spirited Away.

Have you seen Castle in the Sky? Its excellent and it gets really crazy! With floating castles, pirates of the skies...highly recommend it!

Apart from 'Ponyo', which opens in the UK next week, I've now seen all of Miyazaki's films (though not quite all of the Studio Ghibli productions yet). 'Castle in the Sky' is great fun: offbeat, imaginative and the pirates are hilarious!

Ponyo was released here in Puerto Rico, but I missed it. I will be checking it out as soon as its on dvd.

I havent seen all of Studio Giblis films, I still need to see The Cat Returns. Is it any good?

Along with 'Grave of the Fireflies' and 'Only Yesterday', 'The Cat Returns' is one of the few Studio Ghibli films I haven't yet seen. It's in my wife's collection (she owns shelf loads of anime DVDs); as soon as I get round to watching it, I'll post a review.