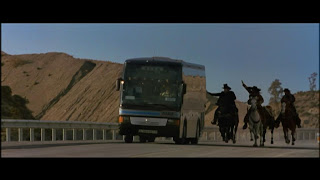 Carlos (Luis Castro) is a young boy whose businesswoman mother Laura (Carmen Maura) is more interested in lining up a deal for a theme park with an American conglomerate than spending any time with her son. Carlos’s father, a stuntman, died in an accident, the circumstances behind which Laura refuses to talk about, years before. When Carlos’s paternal grandmother tells him that her estranged husband Julian (Sancho Gracia) still works as a stuntman in Almeria, Carlos’s imagination is piqued. 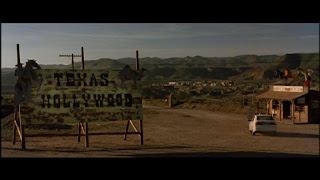 On the pretext of attending a ski-ing holiday with school, Carlos (armed with his mother’s credit card) sets out to Almeria to find his grandfather – a man, he is told, who once worked with Clint Eastwood, George C. Scott and Raquel Welch. He fetches up at “Texas Hollywood” expecting it to be a still thriving film studio. What he finds instead is a crumbling wild west theme park at which Julian leads a ragtag group of wannabes, has-beens and never-were’s through their paces putting on shows for ever smaller groups of tourists. 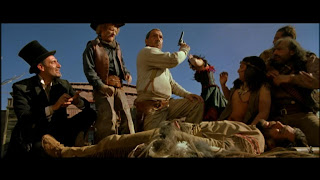 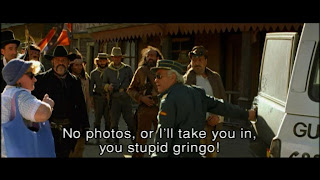 Naturally, when Laura finds him gone – and figures out very quickly when he’s ended up – the shit hits the fan. Not content with interrupting Julian’s wild west show and publically tearing him a new arsehole in front of the biggest crowd he’s played to in years, she responds to her business partner Scott (Eusebio Poncela)’s news that the theme park deal could be scuppered because the proposed site is off the market, by targeting Texas Hollywood. Suddenly out of work, enraged at Laura’s pettiness and facing his own guilt over his son’s death, Julian trades in his blanks for the 800 bullets of the title and takes the law into his own hands. 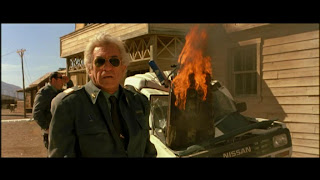 Alex de la Iglesia’s contemporary western is one of the most playful works in his filmography. It’s not quite as slapstick as ‘Accion Mutante’, but it has a wistful sense of nostalgia and a shabbily good-natured humanity which that film lacks. It’s also cynical and racy enough that the proceedings never get bogged down with sentiment. Take the scene where the proverbial hooker with the heart of gold Sandra (Yoima Valdes) catches Carlos peeking at a couple making out and decides to, ahem, give him his first lesson … a Hollywood director would have yelled “cut” before the scene had even begun. De la Iglesia, however, delivers a vignette that’s as touching as it is daring, never exploitative but beautifully observed. 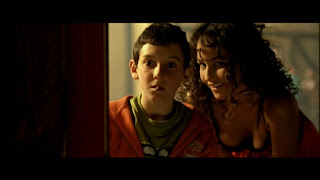 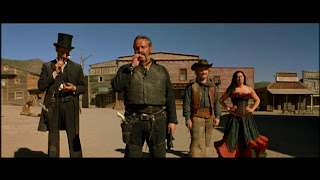 A serious point threads through the frivolity. De la Iglesia captures a sense of society changing, the old ways becoming redundant and men outliving their times that is reminiscent of Peckinpah. A shot of a digger demolishing the gallows pole that’s one of the theme park’s attractions has a parallel in the earthmover crashing through Junior’s boyhood home in Peckinpah’s ‘Junior Bonner’. 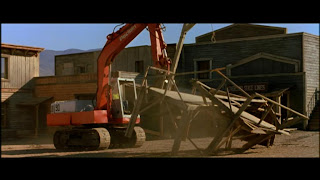 De la Iglesia plays with the imagery and conventions of the western, but it’s plain to see he has a great love and respect for the genre. ‘800 Bullets’ is an exhilarating, often uproariously funny ode to the western in particular and the love of movies in general. Highly and unreservedly recommended.
Posted by Neil Fulwood at 11:24 PM