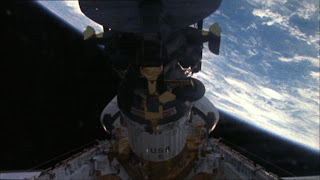 There’s a scene in Tim Burton’s ‘Ed Wood’ where the eponymous wannabe director is looking through some reels of stock footage with a cutting room buddy. He speculates that you could make an entire movie using them.

This, apart from a few original scenes which feature Brad Dourif basically ranting to camera, is pretty much what Herzog has done with ‘The Wild Blue Yonder’. Except where Ed Wood’s footage is strictly B-movie B-roll, Herzog got his from NASA. 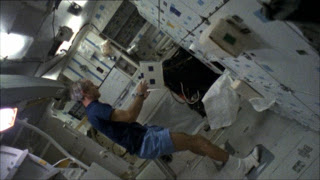 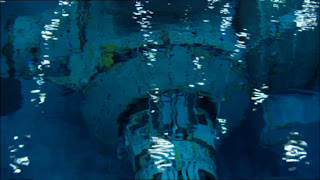 At its most effective, ‘The Wild Blue Yonder’ juxtaposes scenes of the earth seen from space, scenes of astronauts floating gracefully in zero gravity and scenes of divers exploring far beneath the Antarctic ocean. The depths of space and the depths of the sea cohere aesthetically in a tone poem of wondrous images given added meaning and poignance by Ernst Reijeseger’s strange, haunting and beautifully otherworldly score. 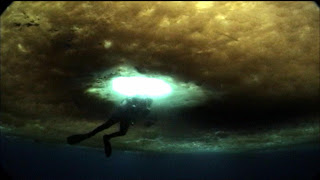 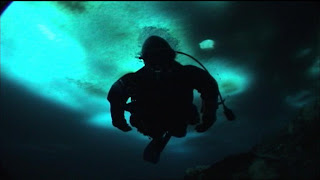 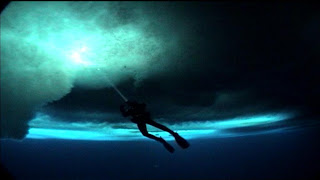 And if that had been the entirety of Herzog’s approach – a wordless poem of visual imagery and music – ‘The Wild Blue Yonder’ might have emerged as one of the oddest and greatest works by a man who has produced more odd and great cinema (the oddness and the greatness often inextricably intermeshed) than most. It could have been considered the concluding part of a loosely connected trilogy following ‘Fata Morgana’ and ‘Lessons of Darkness’.
Like ‘Fata Morgana’, it is an exploration into the uniqueness of the image. Like ‘Lessons of Darkness’, it postulates itself as a science fiction fable documenting the alien qualities of planet Earth as if through the perspective of a visitor from another world. 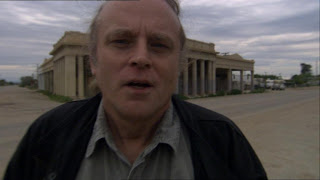 Only here, Herzog makes this aspect literal. He gives us a wild-looking Brad Dourif as the alien, raging at the folly of mankind. He recounts a story about Roswell, alien spores, a mission to the outer fringes of the galaxy and the discovery and planned colonisation of the Dourif alien’s home planet (the “wild blue yonder” of the title). Which all sounds very ‘X Files’/Arthur C. Clarke/Peter F. Hamilton, except that Herzog clearly doesn’t give a flying fuck about traditional (or even recognisable) sci-fi tropes. The Dourif scenes are so completely random and out of character with the deep space/deep sea footage that it’s tempting to wonder if Herzog had basically sold whomever stumped the budget on the sci-fi angle and then decided, with po-faced solemnity, to completely and utterly take the piss.
It’s a curious film, ‘The Wild Blue Yonder’. It’s quite definitely a Herzog film. Minor Herzog, but still intriguing. Get through the Dourif scenes (he has one or two moments that are moderately entertaining, but his verbiage becomes white noise after a while) and you’ll be rewarded with visuals and music that are genuinely haunting. 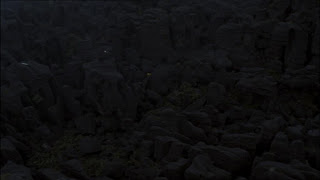 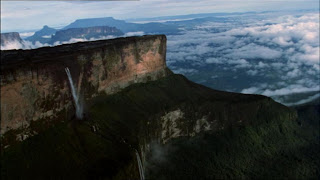 The Region 2 DVD I watched features a half-hour documentary, ‘A Requiem in Space’, about Reijeseger’s vision of the music, his collaborative approach with Herzog and the musicians he engaged, which is pretty much worth the rental price on its own. It clarifies some of the ideas behind the film and provides a fuller appreciation for Reijeseger’s ethereal score.
Posted by Neil Fulwood at 10:31 PM