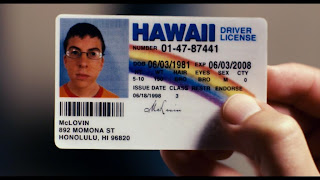 Pop quiz: how many high school comedies are (a) not shit, and (b) genuinely funny?

Personally, I’m counting three: ‘Heathers’, ‘Mean Girls’ (la Lohan in excelsis) and today’s offering, ‘Superbad’. Perhaps the best title thus far from the so-called “Apatow train” – and, ironically, the one Judd Apatow had least to do with (producer duties only, no hand in the script or direction) – this lewd and lowbrow opus is well-written, perfectly played and funny as fuck.

The set-up is as basic as can be and hardly needs rehashing, but for the benefit of the uninitiated: best friends Seth (Jonah Hill) and Evan (Michael Cera) are about to graduate and go to different colleges and neither are any close to scoring with their respective crushes Jules (Emma Stone) and Becca (Marsha MacIsaac). However, two events coincide – their mutual friend and wannabe bad boy Fogell (Christopher Mintz-Plasse) gets a fake ID and Jules throws a party but needs someone to score booze for the guests – setting Seth and Evan off on a series of misadventures and landing Fogell in the company of two off-the-rails cops (Seth Rogen and Bill Hader). 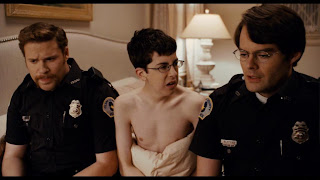 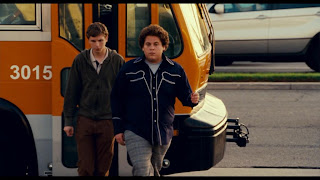 I mentioned that ‘Superbad’ is lewd. Throw in rude and crude just to round it off. Twenty minutes in, Seth is regaling Evan (and us, the audience) with the tale of his pre-pubescent humiliation. Said faux pas involves the obsessive doodling of the male member, the secretive doing so during in class, the stashing of said artworks in a ‘Ghostbusters’ lunchbox and the discovery of his little pastime “just I was a finishing up a big veiny triumphant bastard”. Material of this is ilk is not big and not clever. It is, however, funny as a canister full of laughing gas.
Still, Mottola exerts enough control over the material, though, that he never lets things descend into ‘Porky’s’ style vulgarity. The characters are human. The situations are played for comedy in an organic and unforced manner; even the more slapstick elements never feel forced or overplayed. By the end, he even manages to find a human centre to the characters, never mind their potty-mouths and obsession with sex. 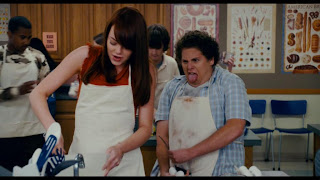 Notwithstanding that I err towards some recently expressed views on Acidemic as regards Michael Cera, I find him less annoying here than in other movies. That he’s part of an ensemble cast, the comedic high points and iconic moments generously partitioned out between them, helps. Jonah Hill achieves a Cartman-like level of foul-mouthed grotesquerie in the early scenes, but unlike Cartman there’s a barely-concealed vulnerability in evidence. Rogen and Hader make one of the best double acts in recent film history as the cops who virtually adopt Fogell … or, as they know him from his patently fake ID, McLovin (“We just cockblocked McLovin” is surely destined to live as one of the all time great lines). Mintz-Plasse as Fogell/McLovin plays a one-note character, but plays that note with such virtuosity the effect is magnificent. MacIsaac gamely pulls off the one scene that truly pile-drives into comedy-of-embarrassment territory, and Emma Stone plays the straight guy (uh, gal) with immense likeability and impeccable timing.
At the risk of incurring Mrs Agitation’s wrath, I have a bit of a cinematic crush on Emma Stone. 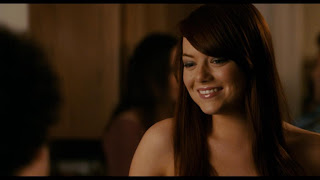 Ahem. Moving on …
‘Superbad’ does nothing new narratively, but it hits all of its marks in fine style and navigates a tightrope between non-PC mind-in-the-gutter ballsy humour and good-natured feelgood entertainment with such carefree aplomb that it’s impossible not to get swept along. Here’s to booze, chicks, pictures of dicks and the dude McLovin!
Posted by Neil Fulwood at 10:34 PM