My Kid Could Paint That 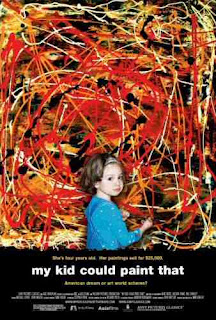 Amir Bar-Lev’s ‘My Kid Could Paint That’ is fascinating and frustrating in roughly equal measures. Fascinating because the narrative, focus and scope of Bar-Lev’s project changed dramatically during production, leaving the filmmaker conflicted and uncertain as to what his aims and responsibilities were. Frustrating because, in the final analysis, it emerges as irresolute.

Bar-Lev (who previously made holocaust documentary ‘Fighter’) had already started chronicling the story of four-year Marlo Olmstead, whose incredibly accomplished expressionistic canvases took the art world by storm and earned her instant celebrity and hundreds of thousands of dollars in sales, when that stalwart of investigative TV journalism ‘60 Minutes’ aired a feature which cast aspersions on the authenticity of Marla’s paintings.

By this point, Bar-Lev’s focus had been the human angle. Footage unused in the final print but present on the DVD extras shows Bar-Lev building up a picture of the small town (Binghamton, NY) from which Marla and her parents, Mark and Laura, hailed. He’d shot interview footage with photo-realist painter and gallery owner Anthony Brunelli (the first person to exhibit Marla’s work), local journalist Elizabeth Cohen (who broke the story, the national press quickly picking it up) and art critic Michael Kimmelman, as well as with a couple of collectors who were self-confessed Marla fans. It seems that Bar-Lev had established deliberately limited perameters to his project; the film – at least until its halfway mark – was clearly not about the art but the little girl who happened to create it. Early scenes stress the normalcy of the Olmsteads as a family, the father working a middle-management job at a factory, the mother a dental nurse. Marla and her two-and-a-half year old brother Zane are shown laughing and playing. To camera, they interview exactly as you’d expect from kids of that age.

The ‘60 Minutes’ broadcast changes everything. Public access footage of Brunelli harassed on the street shows a different side to the urbane sophisticate of Bar-Lev’s interviews. Marla collectors express shock and concern. Mark and Laura Olmstead blatantly try to influence Bar-Lev to use his film to exonerate Marla. It’s during this middle section that ‘My Kid Could Paint That’ almost becomes a gripping and intriguing study of two morally and artistically compromised endeavours: the Olmsteads’ continued commercialisation of their daughter, and Bar-Lev’s account of it as a documentarian.

You see, none of the critics or the sceptics ever come right out and say that Marla didn’t paint the canvases in their entirely, but that from the available evidence (ie. the hidden camera footage) there were doubts as to whether she completed them. Mark Olmstead had aspirations as an artist (although he downplays this in interview almost to the point of denial) and the consensus of opinion tends to his involvement in completing Marla’s work. Finally, even Bar-Lev – who clearly became close to the family during filming and at times seems positively embarrassed at the direction the story has taken – expresses that he has doubts, stating that he’d be happier if better footage existed of Marla creating a painting.

The Olmsteads respond by producing their own DVD (marketed through the Marla website) of home video footage showing the production of a Marla canvas from start to finish. Their conviction is absolute that this will silence all doubts.

To give perspective for the benefit of anyone who hasn’t seen the documentary, these are some of Marla’s earlier works. They’re called ‘At the Lake’, ‘Zane Dancing’ and ‘Ode to Pollock II’. 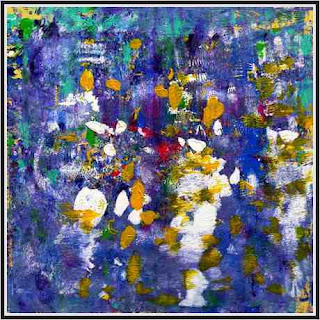 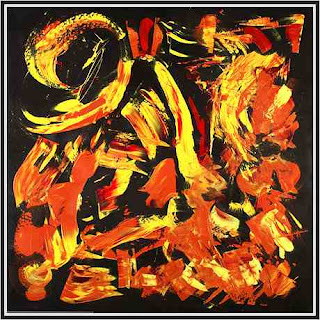 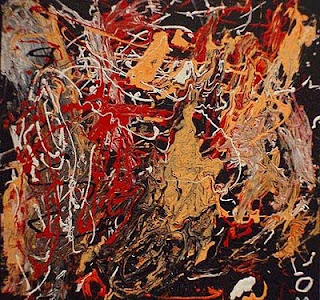 This is the one she produces on camera. It’s called ‘Ocean’. 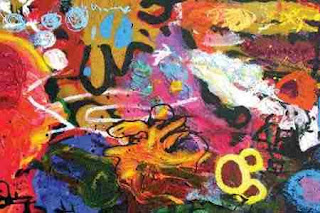 Now, in my humble opinion, ‘At the Lake’, ‘Zane Dancing’ and ‘Ode to Pollock II’ demonstrate technique, form, symmetry and balanced use of colour. ‘Ocean’, however, looks like a painting by a four year old. It’s here that everyone becomes very disingenuous. Brunelli talks about how much Marla’s paintings sold for compared to his painstaking photo-realist works, each of which take up to nine months to complete, and suggests that the Marla phenomenon serves as an exposé of the pretensions and hypocrisies of the modern art world. Cohen states that Marla’s story has become “a story about the story” and pleads that it’s time for the media to leave her alone; Cohen’s admission “and by the way, mea culpa” comes late enough in the game to ring hollow.
Kimmelman pulls the biggest u-turn of all, shrugging his shoulders at the fact that he might have been duped and declaring that “all art is in some way a lie”. He tries to dissemble, talking about how art represents a thing without actually being that thing, but again the words ring hollow. Representation is not the same as untruth. Art is not a lie. Art is a striving towards the truth – be it the intellectual, emotional, aesthetic or, to quote Werner Herzog, ecstatic truth – of its subject. Frustratingly, as with all his other subjects, Bar-Lev doesn’t challenge Kimmelman; doesn’t ask him if he therefore considers Beethoven’s Ninth Symphony to be a lie, or Dostoyevsky’s ‘The Brothers Karamazov’ or Michelangelo’s ‘David’.
Bar-Lev doesn’t probe Mark Olmstead’s background as a wannabe artist. Three of his canvases are glimpsed casually piled out of the way in the basement. I started wondering at this point if they’d been left out to show that Mark’s work was in a different style to Marla’s; judicious application of freeze frame, a minute or two’s scrutiny and I was convinced that one of the paintings was itself of a different style to the other two. Interesting.
By now, I felt I was doing Bar-Lev’s job for him. I scrutinised all scenes shot in the Olmstead home and gnashed my teeth that he wasn’t asking probing questions about their finances. Their house looked spacious, nicely decorated; none of the furniture or carpets seemed old or worn; kitchen units and electrical goods appeared new and decent quality. Not bad, I started thinking, for a couple with two children who worked such ordinary jobs.
But the questions weren’t being asked. Not only that, Bar-Lev seemed to be backing down. During a low-key interview with the Olmsteads, during which no thorny questions are asked and no pressure exerted, Laura wells up (not, it has to be said, very convincingly) and Bar-Lev mumbles apologetically “I’m sorry I brought this [the documentary] into your house.” Getting up to exit the room, Laura responds bitterly, “Documentary gold!” Her voice, I noted, doesn’t hitch or quiver the way you’d expect from someone distressed and in tears.
The thing is, it isn’t documentary gold. It’s a pitiful moment that occurs just as the whole unfocused project shambles towards its fence-sitting conclusion, its director having neither the bullish tenacity to go digging for the truth or the courage of his convictions to declare for the Olmsteads (whom he clearly likes) and champion their daughter’s work. Moreover – whether the doll-like four-year-old actually created the paintings herself or not – the documentary doesn’t engage either with the sad and questionable aspect of a child packaged and marketed as a product.
Posted by Neil Fulwood at 12:09 AM

I enjoy regular visits to your blog. Haven't seen the movie but your review makes me want to.
I disagree, though with your assessment of the 4 shown paintings. I'm no expert but I find "Ocean" to be the strongest of the bunch. It feels sophisticated, has a good balance between abstraction and figuration, and a diverse color palette.

Thanks for the comment, and your continued visits to my blog. Interesting that we have such drastically different takes on 'Ocean'.

Although I realise you've not seen the film yet, I'd be interested as to whether you consider 'Ocean' to have been created by the same hand as the other canvases.

Please let me know if you do get round to seeing the documentary; I'd like to hear your comments on it.

Thanks for sharing this with us. I had not even heard of it before. Have a great week.

Thanks for stopping by, Keith. I'm hesitant to recommend the film because I found it so personally frustrating, but it certainly touches on an interesting story.