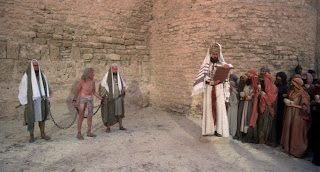 ‘Monty Python’s Life of Brian’ is not blasphemous.

Okay. Wait a minute. Extinguish those burning torches. Lay down the pitchforks. Dissemble that large wooden cross and desist from waving that hammer and bag of six-inch nails around so threateningly.

‘Monty Python’s Life of Brian’ takes the piss out of a lot of things.

It takes the piss out of committees and petty minded bureaucracy. Take the Judean Peoples’ Front (“Judean Peoples’ Front? Fuck off! Peoples’ Front of Judea”) … oh, do beg your pardon … the Peoples’ Front of Judea. What is it that makes the “what have the Romans ever done for us?” scene so funny? The fact that it’s so excruciatingly true to life. I’ve had the misfortune to sit on a couple of committees and it’s been my experience that committees, instead of pulling resources and ideas together and focusing on a particular plan of action and accomplishing a common goal, actually squander resources, deflate ideas, lose focus and accomplish very little in the final analysis. The Python boys understand this and the scene nails it. 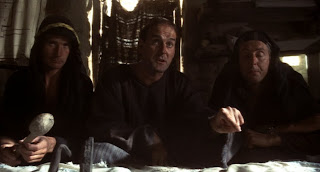 It takes the piss out of authority, governing bodies and the legal system. Take the stoning scene; it’s the best example of petty rules and mob stupidity you could ever put onscreen without hauling in Ken Loach to direct two hours of miserablism.

It takes the piss out of pedantry and the pointlessness of an education system characterised by parrot-fashion learning by rote. Take the scene where Brian (Graham Chapman) is caught graffiti-ing a wall by a legionnaire (John Cleese). He incurs the legionnaire’s wrath not for his act of vandalism or the anti-establishment sloganeering, but for his bad grammar. His punishment? Write out the correct sentence ad infinitum. The punchline is the one of the most priceless visual jokes in the whole film. 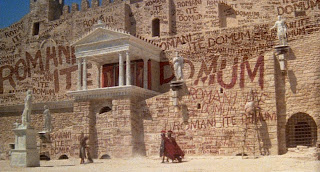 It takes the piss out of speech impediments (“Fwee Woderwick!”).
It takes the piss out of the hard of hearing (“What did he say? Blessed are the cheesemakers?”).
It takes the piss out small-minded parochialism and the you’ve-never-had-it-so-good post-war British mindset:
Beggar: Half a shekel for an old ex-leper?
Brian: Did you say "ex-leper"?
Beggar: That's right, sir, 16 years behind a veil and proud of it, sir.
Brian: Well, what happened?
Beggar: Oh, cured, sir.
Brian: Cured?
Beggar: Yes sir, bloody miracle, sir. Bless you!
Brian: Who cured you?
Beggar: Jesus did, sir. I was hopping along, minding my own business, all of a sudden, up he comes, cures me! One minute I'm a leper with a trade, next minute my livelihood's gone. Not so much as a by-your-leave! "You're cured, mate." Bloody do-gooder.
It uses the old “wrong man” set-up to generate most of its humour. Brian isn’t Christ (“He’s not the Messiah, he’s a very naughty boy”), he’s just mistaken for Him.
‘Monty Python’s Life of Brian’ is chock full of schoolboy humour (educated schoolboy humour, but schoolboy humour nonetheless). Every clever, subtle or sophisticated moment is offset by something profane or lowbrow. It’s gleefully politically incorrect and funny as hell.
But blasphemous? Nah! 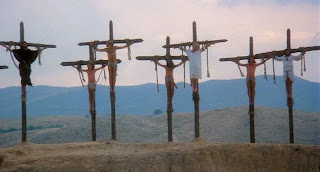 Sorry; what was that? The crucifixion scene? ‘Always Look on the Bright Side of Life’?
Oh.
Yeah.
Bollocks.
Posted by Neil Fulwood at 8:31 PM

Believe it or not I do agree with you. It satire at its best, gets in some great hits ("WE'VE ALL GOT TO THINK FOR OURSELVES!!!!") and has you out the door with a whistle. What more could you ask for.

Funny it must be said, counts for an awful lot.

One of the most acidic and pointedly funny moments, for me, is where Brian rounds on his entourage of unwanted followers and, having tried to convince them he's not the man they should be following, tersely orders them to fuck off. Moment of silence. Glances are exchanged. Then: "How shall we fuck off, messiah?"