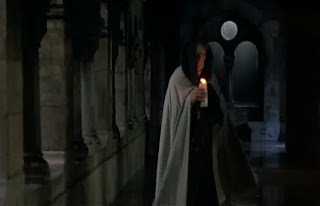 About 30 minutes into Michele Soavi’s ‘The Church’, theologian/librarian Evan (Thomas Arana) delivers a whole screed of expositional dialogue vis-à-vis a group of Knights-Templar-alikes who were assigned to safeguarding the passage of crusaders but became a little too hardcore in their affinity for witch-hunting, punishing the ungodly and putting peaceful villages to the torch. Now, whether the dubbing was particularly poor in the first place or the sound was just dodgy in the print I watched, I had some difficulty in divining whether Evan referred to them as “teutonic knights” or “satanic knights”. I suspect the former, as there’d be no other reason for an Italian-made English-dubbed movie to be set in Germany (not that you’d know it apart from the occasional signboard in the background and a couple of characters called Heinrich and Lotte). But part of me would just love it if in fact it was the latter. The crusaders being protected by an outfit called the satanic knights. Awesome! That’s like a 12-step programme billing itself “the Budweiser temperance society”. Or the ‘Gone in 60 Seconds’ crew providing a secure car parking service.

Evan’s monologue is slightly unnecessary (and probably the only dull part in an otherwise breathlessly active movie) given that a 10-minute prologue has already showed us exactly what this bunch of knights – teutonic or satanic – get up to in the name of the Lord. They ride into town like the Wild Bunch with tin-can helmets (dig those crucifix shaped eye-slits!) … 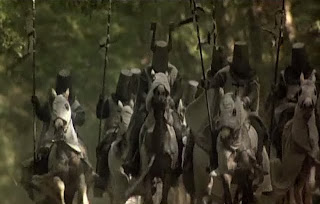 … decide that a young woman with a cross-shaped wound on her foot is an emissary of Satan and next thing you know it’s swords and lances a-go-go and the lime pit they dig to inter all the bodies in is big enough to provide the foundations for a bloody big church.

Then it’s flash forward to the here and now (well, 1989 at least) and guess where the rest of the movie takes place? You know, the movie called ‘The Church’. Yup, you guessed right.

Soavi – a protégé of Dario Argento (who produced and co-wrote ‘The Church’) – quickly establishes the main characters: the aforementioned Evan, fresco-restorer Lisa (Barbara Cupisti), grumpy sacristan Hermann (Roberto Corbiletto), his rebellious teenager daughter Lotte (Asia Argento), a stern Reverend* (Giovanni Lombardo Radice) and the radical forward-thinking Father Gus (Hugh Quarshie). You want to know how forward-thinking and radical Father Gus is? His hobby is archery and he uses the expression “goddamned” as an intensifier. That’s how goddamned radical! 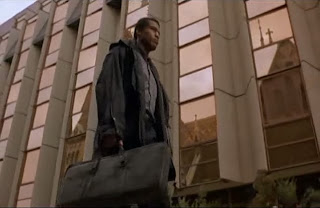 Storywise, things get underway when Lisa discovers a fragment of parchment during restoration works in the cellar and takes it to Evan. It peaks their respective professional interests and they go back to Lisa’s pad to decode it and have sex. And yes, ladies and gentlemen, that’s how perfunctory the romantic subplot truly is.

Evan figures out what the parchment means and becomes consumed with the idea that the church could be built above the resting place of one of the tablets from the Ark of the Covenant. “Shades of Indiana Jones?” Lisa comments archly, but Evan’s deadly serious. So, it turns out, is the malignant force he unleashes during his after-hours treasure hunt in the bowels of the church. Soon enough – SPOILER ALERT – Evan has been possessed, weird shit is happening and it turns out that the psycho teutonic/satanic tin-can-helmet-wearing knights might actually have been right about all that witchcraft guff in the first place. END SPOILERS. 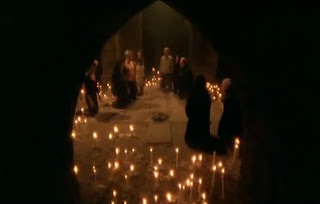 It’s just over an hour into a 100-minute film before Soavi really lets rip with the supernatural hokum and the inventive death scenes, and even then he’s still manically introducing new characters: a bickering teenage couple stranded on their way to a concert; a bickering OAP couple on the tourist trail; a bunch of school kids on a field trip; a narcissistic model, her entourage and a photographer shooting a bridal wear spread at the church. But Soavi’s camera has barely stayed still for that entire hour. ‘The Church’ was his second feature film as director (following the late-in-the-day giallo ‘Stage Fright’**) and his first with any real budget. The guy made the most of the opportunity. ‘The Church’ looks fabulous. The camera prowls and glides and serves up as many subjective POVs as anything in Argento’s filmography. Compositions are striking, sometimes deceptively so and sometimes aggressively off-kilter. There’s barely a single frame that isn’t in some way visually interesting.
This is Soavi’s great strength in ‘The Church’. Which is good, because its flaws are manifold. The narrative isn’t particularly original or engaging and there’s probably only 45 minutes’ worth of actual story if you boil it down. The acting veers between adequate and hammy, with only the 14-year-old Asia Argento showing any star quality. 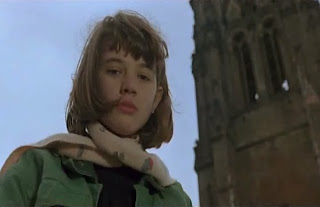 The dialogue is utilitarian. Characterization? Haphazard, with the most sympathetic character – Father Gus – never being fleshed out into a genuine protagonist. The lack of chemistry between Arana and Cupisti doesn’t help either. Also on the minus list, the effects are rubbery at best, with the fish demon that leaps out at someone from a font leaving me wondering as to whether the ghost of Ed Wood had been summoned at a production-office séance, and the column of writhing figures emerging from the depths at the end less like a Hadean version of Gustav Vigelund’s Monolith than an out-take from Brian Yuzna’s deliberately cheesy ‘Society’.
I first saw ‘The Church’ on VHS in, I think, 1991 or 1992. Last night was only my second viewing. But it reminded me why I’d enjoyed it back then, in my late teens. Firstly, visually it’s as cool as fuck and back than I was even more of a sucker for iconography than I am now. Secondly, it dispenses with coherence and delivers what I wanted from a horror movie back then: hidden secrets, demonic curses, gothic imagery, dark rituals, imaginative gore and a bit of nudity. I’m pleased to report that ‘The Church’ hit all those same notes for me twenty years later. Maybe more so. Because it also provided a nice little nostalgia trip back to a pre-torture-porn era when it was okay for horror movies to be fun.

*If he was referred to as anything other than “your grace”, I missed it.
**Which has nothing to do with the Hitchcock movie. Mainly by dint of Hitch not including a psychotic killer with a bird mask and a chainsaw in his movie.
Posted by Neil Fulwood at 8:42 PM

Great review! I didn't know the The Final Girl Film Club choice this month was my favorite Soavi movie! Oh well. I've written about this before at my site, and you definitely touch on what makes it so appealing. Soavi was awesome (too bad he called it quits with the horror genre after making four great horror films), and THE CHURCH is probably my favorite Italian horror movie. Yes...I like it better than anything by Fulci, Bava, or Argento. Is it better than SUSPIRIA or THE BEYOND or films like that? No. But something about it keeps me coming back; I absolutely love it.

The Keith Emmerson/Philip Glass score is perfect, too!

Damn! I forgot to mention the music in my review. Yeah, the juxtaposition between Emerson's frenetic contributions to the score and the minimalism (natch) of the Philip Glass compositions is quite remarkable. And something, I think, that's indicative of 'The Church' as a whole: it strives to be a far classier act than, say, Lamberto Bava's Argento-produced 'Demons' films, but never lets you forget that it's still an Italian horror movie for all that.