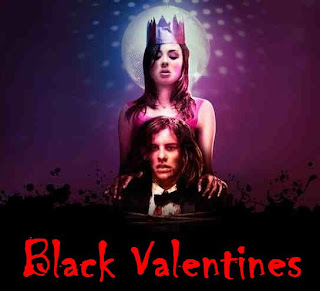 So the first month of this new year draws to a close. Already, fractionally, the evenings are that little bit lighter. February takes her place in the calendar tomorrow. Shop windows are already bedecked with swathes of pink crepe, flowery designs and cuddly toys holding out ersatz roses. Spring is just round the corner and a young man’s thoughts turn to romance.

Well, fuck that shit here on The Agitation of the Mind! Granted, I’m a happily married man and I love Mrs F completely, but I’ve never seen the point of lining the pockets of florists and card shops who have decided to whitewash the fact that February 14th is actually the anniversary of Valentine’s death. He was beaten with clubs, then beheaded. Yeah, put that on a fuckin’ teddy bear!

Valentine, along with St Marius, aided Christians persecuted by Claudius II, and for this he was put to death. He is now the patron saint not only of betrothed couples, happy marriages and lovers (does this mean he’s the patron saint of extra-martial affairs, too? surely a conflict of interest!), but also of epilepsy, fainting, plague, bee-keepers and travellers. I get mixed messages from this. Okay, I can see how swooning ties in with all the hearts and flowers rigmarole, but epilepsy, plague, bee-keepers and travelling? Sounds like a recipe for ‘The Swarm’ by way of ’28 Days Later’ with a dash of ‘The Crazies’ thrown in for good measure.

Here at The Agitation of the Mind, yours truly has not achieved any form of martyrdom and subsequent deification (and having seen Pascal Laugnier’s ‘Martyrs’, I don’t fucking want to, either!), therefore cannot lay claim to the title Patron Saint of Cynicism. Nonetheless, I’m going to indulge in some spectacularly black-hearted programming and populate the fortnight leading up to Valentine’s Day with a series of films skewed towards the darker side of human relationships.

Expect duplicitous dames, femmes fatale, sexual shenanigans, hanky panky and at least one bout of slap and tickle where the slap aspect is definitely predominant over the tickling. Welcome to two weeks, starting from tomorrow, of black valentines.
Posted by Neil Fulwood at 9:25 PM

The Winter of Discontent...then a revolution, and now Black Valentines! Holy smokes, Neil is in a dark mood, which of course makes for some cool reading!

And if that's not bad enough, I'll be kicking off the Summer of Satan in June, looking at all manner of devilish and demonic movies.

Maybe I need to do a Cute Fluffy Bunnies week just for a change of pace!