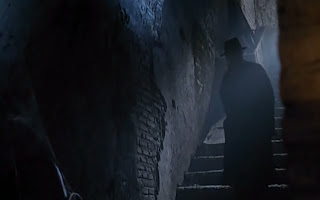 As a die-hard and unapologetic lover of gialli, I have as much reason to shout out a big “thank you” to Mario Bava as a Bond movie aficionado has to Guy Hamilton for ‘Goldfinger’.
You see, ‘Blood and Black Lace’ is the ‘Goldfinger’ of gialli. Yes, it was the earlier ‘The Girl Who Knew Too Much’ that pretty much kicked off the whole giallo movement (just as ‘Dr No’ lit the fuse on 007’s fifty-year blockbusting history) but it was ‘Blood and Black Lace’ that pretty much established the formula.
Just as ‘Goldfinger’ gave us the gadgets, the one-liners, the Aston Martin DB5 and a kick-ass pre-credits sequence, ‘Blood and Black Lace’ gave us a masked, gloved and trenchcoated killer, a fashion house populated by glamorous women, a cluster of operatic death scenes, baroque set design and opulent, hyper-stylized cinematography. Slightly off-kilter compositions, spatial distortions, mannequins that are almost as creepy and unsettling as the murderer.
It gave us, in short, images like these: 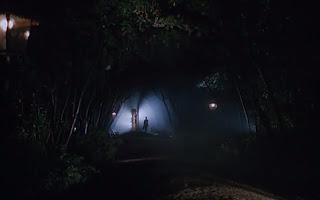 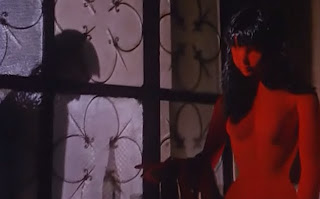 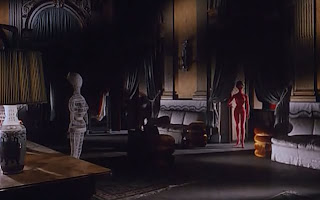 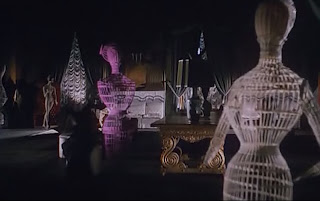 The plot kicks off with the murder of Isabella (Francesca Ungaro), a model for haute couture firm Christian. Inspector Sylvester (Thomas Reiner) is soon on the scene, and finds that his presence is making everyone at Christian – from owner Countess Cristina (Eva Bartok) and manager Max (Cameron Mitchell) to the luckless Isabella’s fellow models Peggy (Mary Arden), Nicole (Ariana Gorini) and Tao-Li (Claude Dantes) – distinctly nervous.
And with good reason. Everyone at Christian has something to hide, and it quickly transpires that Isabella kept a diary documenting all the seedy secrets, dirty dealings and guilty goings-on. Retrieval of said journal becomes a matter of priority, but the killer – in true giallo style – always seems to be one step ahead.
Of course, it doesn’t have all the giallo tropes – that would be too much to hope for in a single movie. It would run the risk of marking that movie out as the last word in gialli and thereby make redundant my ongoing quest to track down as many of these weird and wonderful movies as possible. ‘Blood and Black Lace’ doesn’t, for instance, feature any bottles of J&B nor is the tenacious Inspector Sylvester your standard-issue useless copper. (Although Bava does throw in an excellent and mordantly amusing scene where an ID parade degenerates into a free-for-all, leaving him with even more suspects instead of a cast-iron identification.)
It doesn’t have Edwige Fenech, either, but this is a minor quibble given the sheer amount of eye-candy on display. Bartok, in particular, ticks all the boxes as the haughty brunette with skeletons in the closet than Burke and Hare with a shared wardrobe. 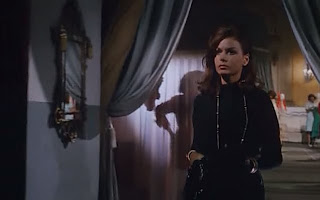 Ultimately, ‘Blood and Black Lace’ looks gorgeous in the way that only Bava and Argento (at his best) could make a film look gorgeous. Deep, rich colours. The kind of set design that makes your average Pedro Almodovar outing look as austere as a Carl Dreyer film.
A twisty, turny mystery at its heart; beautiful people getting offed in various ways; a genuine capacity for suspense underpinning the gorier business (check out the montage of reaction shots when Isabella’s diary is first mentioned – Bava demonstrates real bravura!); and set-pieces which wrote the rule-book for four and a half decades of stalk ‘n’ slash. One of the first, one of the best and impossible not to love.
Thank you, Mario Bava!
Posted by Neil Fulwood at 6:40 PM

Excellent piece. I need to brush up on my giallo. All I really know is Argento, frankly.

Agreed, one look at this film and you can see where Argento got most of the inspiration for his films. Bava was his master, Argento was the young padawan.

Loved Blood and Black Lace, such style to the film. But then again, the same can be said for most of bava's work.

Scott - Bava is a "must" if you want to explore the giallo beyond Argento. Like Franco says in his comment, Argento's aesthetic owes a huge debt to Bava.

After Bava, try gialli by Sergio Martino, Pupi Avati, Aldo Lado and Luciano Ercoli. And, of course, keep checking back on this blog every Sunday throughout the year for as long as I can track down gialli to review.

Franco - agreed: Bava was a visual stylist per excellence. Though not a giallo, I'm definitely going to be reviewing 'Danger: Diabolik' at some point this year, for no other reason than it's rebellious/revolutionary spirit!

Bava's colors are really a site to behold in this film (and most of his films, really). His use of colored gel lights really showcases lush reds, blues, and greens on the screen in an almost surreal manner.

My particular favorite scene is the chase through the antique shop, particularly the shot with the glowing neon sign from outside.

Oddly, I've found that though I like Bava's work as a whole and recognize his greatness, I don't think he made any giallo as good as the best from Avati, Martino, or even Argento (though I'll put his Gothic films up against anyone). Curious what your thoughts on that are...

I'll get back to you on that one, Troy. I'll be appraising some other Bava gialli in the coming weeks - '5 Dolls for an August Moon', 'Hatchet for the Honeymoon' and the oft-cited first giallo 'The Girl Who Knew Too Much' - and I think I'll leave my take on Bava and the giallo till then.

What I will say is that 'Blood and Black Lace', as iconic as it is and notwithstanding that it serves as an aesthetic blueprint for the genre, doesn't really generate much mystery, and the big reveal is nowhere near the kicker that, say, Argento delivers in 'Deep Red', Fulci in 'Murder to the Tune of Seven Black Notes' or Ercoli's double-whammy at the end of 'The Red Queen Kills Seven Times'.

All this talk of giallo and Argento made me dust off my old CD of Goblin scores from Profondo Rosso, Suspiria, et al. My neighbors would like to thank you.

Also, wasn't Bava responsible for "Black Sabbath," the film which gave a certain group of metal godfathers its name? Count me in.

Tell your neighbours that they're more than welcome.

And yes, there is that 'Black Sabbath' connection. Which might lead me to doing a similar favour for my neighbours this evening!