13 FOR HALLOWEEN #5: An Appetite for Bernard Brady 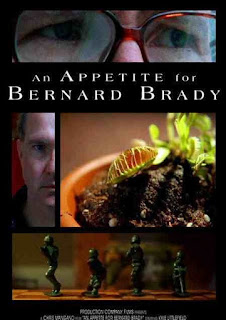 “Suche gut gebauten Achtzehn bis Dreißigjahrigen zum Schlacten.” Such was the ad Armin Meiwes posted on a website called The Cannibal Café in 2001. It translates as “looking for a well-built 18 to 30 year old to be slaughtered” and the weird thing is that a whole bunch of people replied to it. All but one subsequently changed their minds and to give Meiwes his dues, he respected their choices. The guy who didn’t welsh on the arrangement was Bernd Jürgen Armando Brandes. They met at Meiwes’ house, a dwelling Meiwes had outfitted with what he called “the slaughter room” in readiness for their assignation. They made a video which documented how Brandes became the main course. The specifics are visceral, but for those unacquainted with the case, it’s worth a short précis for the sheer absurdity of it. If you’re eating, about to eat, or considering eating in the next, oh I don’t know, week and a half, you might want to disengage at the end of this paragraph and maybe pop back later.

For those of you still reading, this is what happened:

Meiwes and Brandes decided that they would cook Brandes’ penis and eat it together, with Brandes apparently quite keen that Meiwes bite it off. This, for me, is where the absurdity starts. I can only imagine that if Agitation Jnr were bitten off or otherwise severed, the last thing on my mind would be its nutritional value. I would imagine that the main thing on my mind would be the ungodly degree of pain resulting from its detachment. Meiwes and Brandes were obviously hardwired to a completely different psychology. Meiwes tried biting Brandes’ todger off, but found it difficult and resorted to the use of a kitchen knife. I’m making an educated guess that anaesthesia wasn’t employed. Of the gastronomy that followed, Meiwes’s Wikipedia entry offers this wonderful description: “Meiwes then fried the penis in a pan with salt, pepper, wine and garlic; he then fried it with some of Brandes’s fat, but by then it was too burned to be consumed. He then chopped it up into chunks and fed it to his dog.” Now imagine that piece of prose delivered in the plummy tones of Delia Smith or Nigella Lawson. Or even Gordon Ramsay bursting into Meiwes’s kitchen screaming, “You’ve overcooked the cock, you fucking Teutonic loser!” Comedy gold.

Meiwes took a break from the kitchen for a few hours while Brandes lay bleeding in the bath tub. Eventually, Meiwes gave his victim alcohol, pain killers (pain killers, after chopping his willy off – fucking pain killers!!!) and sleeping pills, then hauled Brandes to the slaughter room, stabbed him in the throat (presumably as a safeguard in case the combination of blood loss, alcohol and cocktail of pills hadn’t already done the job), and hung him on a meathook. Thanks to the convenience of owing a deep-freeze, Meiwes made Brandes last for 10 months. Probably cut down on his grocery bill no end.

Now, you might consider me a sicko for suggesting this, but the Armin Meiwes story – which inspired songs by Rammstein, Marilyn Manson and Bloodbath – has all the makings of a cracking comedy. ‘Carry on Up the Meat Hook’. ‘Honey I Burned the Penis’. ‘Who’s Being Killed for the Great Chefs of Europe?’ Inexplicably, none of the films that take their cue from the Meiwes case are comedies. They are, indeed, a mixed bag (and one that I might have to explore as part of this year’s Winter of Discontent), ranging from Martin Weisz’s ‘Butterfly: A Grimm Love Story’ (a.k.a. ‘Grimm Love’) which focuses on a student (Keri Russell) researching her thesis on cannibalism, to Marian Dora’s ‘Cannibal’ which I can only describe as what you’d get if a Ruggero Deodata video nasty were spliced with a gay porn version of ‘Elvira Madigan’.

Perhaps the most elegant and cerebral take on the subject matter, however, is Chris Mangano’s ‘An Appetite for Bernard Brady’, which relocates the story to Seattle and reimagines Brandes as the eponymous Brady (Kyle Littelfield). This 15-minute short is told entirely in voiceover; various characters in the film address Brady, but he never speaks except to record a message inviting the Meiwes stand-in to eat him. I say “stand-in”; Mangano doesn’t actually give us a version of Meiwes, apart from a darkly eroticised figure who features very briefly in a dream sequence. It barely even counts as a spoiler to reveal that Mangano doesn’t even take the story through to their meeting. What he concentrates on is a psychological portrait of a man who has lived a solitary life – and, outwardly at least, a conventional one – a man you’d perhaps dismiss as boring; a bit of a nerd. But Brady’s unassuming demeanour has been his armour from a young age: it’s what cloaks his obsession with, and sexual response to, the concept of victimhood.

Right from the outset, with Brady pouring over a book of Bible stories for children and lingering on a picture of Abraham about to sacrifice his son – a picture which takes Brady back to his own boyhood and the furtive glee with which he returned to that image – Mangano steers the film into some effectively dark territory. A subsequent scene where the young Brady, fascinated by an old movie showing a deserter executed by firing squad, re-enacts it in his bedroom, starts off almost ridiculously with a line up of toy soldiers, then suddenly takes a turn into the genuine horrible as the lad happily pulls a pillow case over his head and stands to attention.

Audience knowledge that something twisted and dysfunctional has sat in Brady’s psyche from childhood throws into sharper relief moments that document his banal day-to-day existence – moments that would be dull to watch without this dark context. Mangano – whose only film this is as director – demonstrates a sure touch with only a montage of Brady failing to click with a series of dates relying on obvious stereotypes. Between his telling attention to detail and Littlefield’s nicely underplayed performance, Brady emerges as curiously sympathetic. And the visual punchline the film ends on is perfect.
Posted by Neil Fulwood at 10:24 PM


gee neil, this is really in the holiday spirit alright. funny, right off, it puts me in a mind of this tale. have you ever heard or read this one before?

Never come across that story before, Andrew. It makes for interesting reading, and makes me wonder if the Soska sisters have optioned the article. I've heard of a case in the UK (although it could be an urban myth) where gender reassignment surgery was done (as described in the article) without the full course of hormone therapy being completed; ingrowing pubic hair was the result.