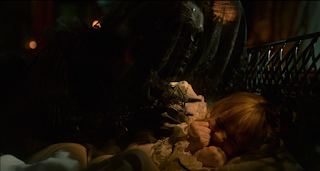 Best I can make out, ‘Crimson Peak’ takes place somewhere between 1893 and 1901, but the costumes, set-design and the script’s suggestion that the steam pumping engine is still in its infancy would have you convinced that’s it set a good hundred years earlier. It’s only the America-set first act where electricity, the typewriter and the Model T Ford are present and correct, and dates on some documents late in the film, that hint at comparative modernity. These things aside, every frame of ‘Crimson Peak’ announces with declamatory pride director Guillermo del Toro’s intent to wallow in the tenets of the gothic romance and anachronism be damned. Narrative urgency be damned, as well. And while we’re at it, here’s a big “be damned” to actually bothering to scare the audience. ‘Crimson Peak’ is too opulent, too grand guignol, to ever generate any real tension; its ghosts too lovingly conjured, even in their comparative ickiness, to frighten.

Plot-wise, it’s Melodrama Central. Aspiring author Edith Cushing (Mia Wasikowska) lives with her widower father, self-made man Carter (Jim Beaver), and tries to gently deflate the advances of childhood friend Dr Alan McMichael (Charlie Hunnam). One day, whilst doing a sort of prototype version of hotdesking at her father’s office in order to use a typewriter, she meets down-at-heel British aristocrat Sir Thomas Sharpe (Tom Hiddleston), who’s in America to try to secure investment for a clay-mining operation; he needs the money for a steam pumping engine. Carter not only refuses to pony up any spondoolies, but has Sharpe investigated and – when he realises that his daughter’s growing fond of him – warned off. Nonetheless, Edith is won over by him; and when her father dies in a seemingly motiveless attack, she decides she has nothing to remain in America for, and accompanies Sharpe to England. Here, Sharpe’s behaviour changes and he seems strangely in thrall to his sister Lucille (Jessica Chastain). Edith falls ill. The Sharpes’ crumbling ancestral pile reveals itself as a repository of secrets. 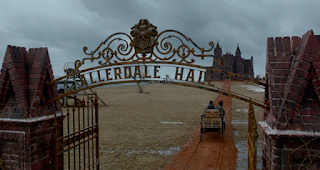 From the infant Edith’s dead mother warning her from beyond the grave to “beware of Crimson Peak”, to the true nature of Thomas and Lucille’s relationship; from the truth about her father’s death to the too-easily-found passel of documents and wax cylinders that provide join-the-dots exposition on behalf of anyone not possessed of a functioning cerebral cortex and therefore able to figure it out for themselves, ‘Crimson Peak’ deals in a particular line of narrative tosh that’s as hamfisted as it is predictable. The script, by del Toro and Matthew Robbins, struggles to generate a single interesting idea, let alone an original one.

What it does have – in spades – is a stylish visual style and production design to die for. Yes, it has decent performances from the main cast, and the visual effects and superbly rendered. Yes, the music is effective in an entirely “obvious” sort of way. But it’s the look of the film that’s its greatest strength. If ‘Crimson Peak’ had been conceived solely as a visual love-letter to Dario Argento circa ‘Suspiria’, it couldn’t have been more aesthetically successful. Never a slouch as a visual stylist anyway, del Toro has created with ‘Crimson Peak’ his most wildly gorgeous, dementedly beautiful work to date. Using the Agitation of the Mind rule of thumb for determining just how jaw-slackeningly awesome cinema can be as a visual art form – pause the thing at random a dozen or so times and if every freeze frame gifts you with an image you’d happily and hang on your living room wall, you have a winner – ‘Crimson Peak’ passes with flying colours and then some. 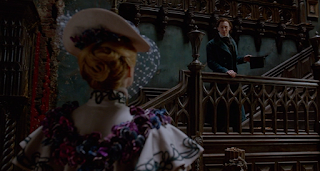 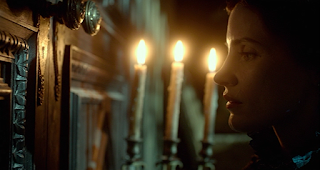 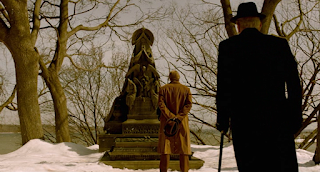 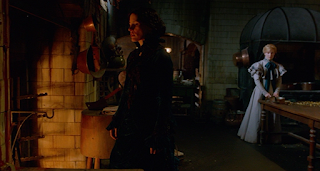 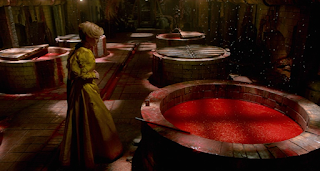