IN BRIEF: Kubo and the Two Strings 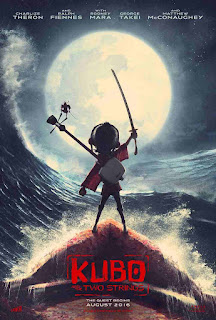 ‘Kubo and the Two Strings’ begins with a voiceover exhorting the audience not to look away, not to lapse in concentration for even a second; that everything they are about to see is inimically important. Which I superficially took for a device to make the kids in the cinema settle down, shut up and pay attention (and had that been the intent, kudos: there wasn’t a peep out of the under-tens at the screening I attended), but which is actually a statement of intent. ‘Kubo’ is a film in which there’s no such thing as incidental detail. Everything matters.

It’s a sublime and evocatively detailed account of the need for storytelling – ‘Kubo’ grounds its aesthetic in Japanese mythology, but the truths it tells are universal – and the inevitability of endings. What starts, for its young protagonist, as a story told in a marketplace for tips – a story, moreover, that he deliberately leaves unfinished at the end of each day – becomes the overarching narrative of a personal quest that he’s forced into with a talking monkey (a talisman come to life) and an amnesiac samurai who’s been transmogrified, Kafka-like, into a bug.

‘Kubo’ is a quest story, a Lafcadio Hearn-like folk tale of the supernatural, a dark family drama, a meta-narrative that reconstructs and comments on itself, and a treatise on loss, regret and memory. It’s incredibly profound and, at times, almost unbearably poignant. It’s the best thing animation studio Laika have yet produced, besting even their world-class debut ‘Coraline’. There is hardly anything to criticise, with even the occasional anachronistic Americanism or obvious gag doing little to detract from how cleverly constructed, intelligently scripted and visually beautiful it is.

‘Kubo’ deserves a review three times as long as this one, illustrated with at least a couple of dozen screengrabs. For now, though, given the dictates of an incredibly time-consuming project I’m currently embroiled in, this will have to do. But check back with me after I’ve acquired the DVD. These 350 words barely scratch the surface of what could quite easily be the film of the year.
Posted by Neil Fulwood at 11:23 PM