IN BRIEF: The Infiltrator 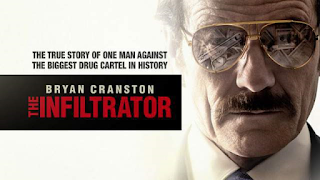 Robert Mazur’s non-fiction account of his role in an undercover drugs operation that brought down Pablo Escobar and blew open a far-reaching money-laundering ring is mentioned a couple of times in ‘Breaking Bad’. Irresistible casting, therefore, to have Bryan Cranston as Mazur in Brad Furman’s slow-burn adaptation of said autobiographical work. Irresistible … and justified: Cranston is fantastic, delivering a grounded performance that rises above the occasional tendency to bland direction. He’s ably supported by John Leguizamo, Diane Kruger, Benjamin Bratt and Amy Ryan. Ryan in particular is swiftly becoming one of my favourite contemporary character actors.

Furman’s direction works best when he’s focusing on the logistics of the operation. There’s a sense of the various players as chess pieces on a geographically expansive board that’s reminiscent of, say, John Frankenheimer’s precision placement of protagonists and antagonists and the interrelationships between their varying agendas in ‘The Manchurian Candidate’ or ‘The Train’. The expected crime movie tropes and macho posturing are kept to a minimum, with only one scene of Mazur having to do something reprehensible in a restaurant in order to maintain his cover coming over as set piece (it’s very reminiscent of ‘Donnie Brasco’) rather than recreation.

The script, by Ellen Brown Furman, marshals a large cast of recalcitrants, from street-level informers to white collar banking executives to the drug czars at the top of the chain, but never loses focus. The two-hour-plus running time zips by with only minimal need for gunplay or blood-letting. And if nothing leaps out directorially to stamp the film with Furman’s signature (based on his previous output, I’m not entirely sure he has one) that’s only a minor grump. If Furman never moves beyond being an efficient, craftsman-like filmmaker, then projects like ‘The Infiltrator’ will benefit, rather than being compromised by, efficiency and craftsmanship.
Posted by Neil Fulwood at 8:26 PM

If you want your ex-girlfriend or ex-boyfriend to come crawling back to you on their knees (even if they're dating somebody else now) you must watch this video
right away...

(VIDEO) Why your ex will NEVER come back...