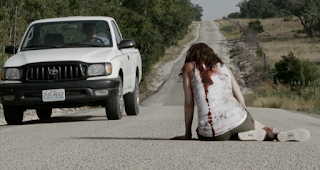 The grim six-minute pre-credits sequence of Benjamin R. Moody’s ‘Last Girl Standings’ presents a litany of gore and woman-in-peril tropes that most horror movies would leave for their final reel. In short order, Camryn (Akasha Villalobos) witnesses the murder of her boyfriend by a psycho in a deer mask called The Hunter, barely escapes immolation herself, stumbles on the strung up and/or mutilated bodies of their friends at a campsite, tries to rescue someone who’s still alive but accidentally triggers one of The Hunter’s traps, killing them, fends off another attack by The Hunter, and more through luck than judgement outwits him. Later, emerging from the woods by a back road, she’s assisted by a good Samaritan motorist only to go into hysterics when she hallucinates The Hunter sitting in the back seat.

Four years later, Camryn’s living quietly in a new town, having utterly refused to talk to the press about what happened. In fact, Camryn doesn’t talk to anyone much. She holds down a tedious, low-wage job at a dry cleaning firm, lives in a one-room apartment that she hasn’t personalised in any way, and he only real possessions are some cardboard boxes containing files, news clippings and ephemera on the case. Moody intelligently uses the credits sequence to give an account of the media’s hyperbolic coverage of the story, Camryn’s determined avoidance of the limelight, local controversy over The Hunter’s burial in an unmarked grave, and the delight of Hunter obsessives on discovering the location of said resting place.

With all of this established, Moody takes a solid hour (‘Last Girl Standing’ has a run time, including end credits, of 91 minutes) to chart Camryn’s journey from PTSD and intimacy issues to catharsis/closure and social re-engagement. The catalyst is her new work colleague Nick (Brian Villalobos) who offers her a place to stay when she’s menaced by a mysterious figure whilst working late. Her close-guardedness is gradually challenged by Nick’s housemates, particularly the well meaning but clingy Hannah (Laura Ray) and the pragmatic Danielle (Danielle Evon Ploeger), herself the survivor of something psychologically damaging. 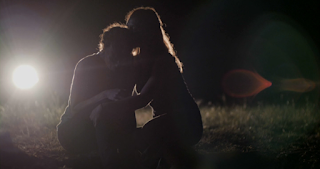 Camryn’s regular nightmares and intermittent hallucinations of The Hunter might be the product of her mind, but the Blair Witch-like totem she finds affixed to Nick’s chair at work, and the skinned rabbit hung up in Nick and his buddies’ back yard, are something else entirely, and she becomes convinced that, somehow, The Hunter has returned and that Nick, Danielle, Hannah and the others are in mortal danger purely because of their association with her.

Is Nick too good to be true? Is his artist friend who works in wood – and scours forests for trees that have fallen naturally because he can’t bear them to be cut down – more than he seems? Is Danielle’s complicity in Camryn’s darkly obsessive behaviour during a girls-only road trip indicative of other motives? Moody maintains a sense of uncertain in the background while keeping the character drama up front. He also plays with a lot of established horror tropes, seeming to set up any number of scare scenes only to subvert them. When the past comes crashing back into Camryn’s life during the last twenty minutes, the terror begins with a scene so traditional in its staging and gore that you’re convinced there’ll be a ‘reset’ any moment, indicating that Camryn’s mind is still troubled and her journey towards social functionality still has a way to go. But the scene rumbles on, all blood and gore and viscera … and Moody paints himself into a corner, there being only two logical ways it can play out. 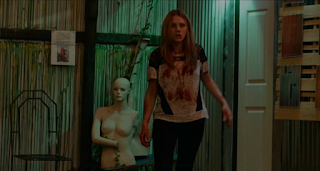 And for all that the final act is as effective as anything the stalk ‘n’ slash genre has served up, there’s a tang of predictability about it. I get that Moody was going for circularity – a narrative option that can be utilised exceedingly well: see Christopher Smith’s ‘Triangle’ – but it’s a slight disappointment that the intense, intelligent and low-key character drama of the film’s extended mid-section is so hurriedly jettisoned in favour of boilerplate violence. It’s almost as if Moody were worried that his audience wouldn’t sit still for another twenty minutes of psychological portraiture and felt he had to make a sop to the gore-hounds.

In its defence, though, ‘Last Girl Standing’ achieves some impressive grace notes when it’s simply spending time with its characters and observing Camryn’s edgy navigation of even the simplest social circumstances. Akasha Villalobos gives a committed and commendably gauche performance as Camryn, while Danielle Evon Ploeger ought to be getting lead roles handed to her on a plate. Writer/director Moody, whose first feature this is, knows exactly what he’s doing with the material and wrings a fine piece of craftsmanship from the strictures of what was evidently a miserly budget. If he ultimately delivers something that just falls short of greatness, there’s plenty to suggest that he’ll succeed in the not too distant future.
Posted by Neil Fulwood at 8:20 PM