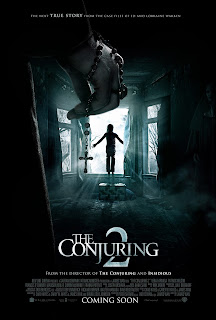 ‘The Conjuring’ came out of nowhere three years ago – the first truly great film on James Wan’s CV, benefiting from a slow-burn atmosphere, a cluster of great performances and some chillingly effective scare scenes. That it was based on the casebooks of Ed and Lorraine Warren, paranormal investigators whose work has met (putting it as politely as possible) with no small degree of scepticism, was almost beside the point. ‘The Conjuring’ was a terrific, old-school haunted house movie; whatever its roots it actuality, the case that it was based on isn’t as well known as that of the Annabelle doll (referenced as a prologue) or the Amityville haunting.

Ed and Lorraine’s Amityville investigation provides the prologue to ‘The Conjuring 2’, which then goes on to document their involvement in the Enfield haunting. The Amityville business almost overbalances the film from the off, partly because it’s all so familiar (Jay Anson’s supposedly non-fiction potboiler, Stuart Rosenberg’s histrionic 1978 adaptation, a fuckton of awful sequels and a Platinum Dunes remake), partly because we all know now that the Amityville haunting was basically bollocks, and partly because of the inelegant way Wan stages the scene, Lorraine (Vera Farmiga) wandering around said property in a trance, discharging and reloading an invisible pump-action shotgun.

The scene builds to a decent climax, though, as Lorraine’s psychic connection with former Amityville resident and mass-murderer Ronald DeFeo leads her to a shadowy basement where she has a premonition of Ed (Patrick Wilson)’s death. Already haunted by the events of ‘The Conjuring’, Lorraine decides there and then that the paranormal investigation side of things is over and done with, finito, never going it back to it no more, uh-huh, no siree. And indeed, one opening credits sequence later, they’re happily doing the lecture circuit and doing TV interviews. Okay, maybe not happily: a fellow guest on the TV show loses no time in calling them out as shysters.

Then, on the opposite side of the Atlantic in a grimy suburb of London (the griminess doesn’t stop Wan throwing in a montage of every visual cliché one could possibly associate with England’s capital city, scored to – yep – ‘London Calling’ by The Clash), a single mother and her four children experience a series of inexplicable events, the ferocity of which becomes more pronounced. Naturally, Lorraine’s misgivings are eventually overcome and she and Ed join a number of other interested parties – ghosthunters, academics and sceptics – drawn to Enfield as a media circus whips itself into a frenzy. Ed and Lorraine reassure each other that they’re only there to observe and advise the church (if a reason was given as to the Catholic church in America’s interest in a semi-detached house in Enfield, UK, then I must have missed it), but it’s not long until they forge an emotional connection with the family and their involvement in the case puts them both at risk.

‘The Conjuring 2’ – while never quite hitting the heights of its predecessor (and certainly not delivering anything as brilliantly creepy as the hand-clap scene) – has a lot going for it. First and foremost, Wan’s steadfast refusal to rush things. He spends a good chunk of the first hour introducing the Hodgson family – matriarch Peggy (Frances O’Connor) and siblings Margaret (Lauren Esposito), Janet (Madison Wolfe), Johnny (Patrick McAuley) and Billy (Benjamin Haigh) – and incrementally developing the haunting. Things reach a point where the Hodgsons decamp and seek shelter with a family across the road – the Nottinghams – only for the weird shit to follow them, in the form of the film’s single best ghost: the Crooked Man. There’s also some business with a toy fire engine that’s far more unsettling than it has any right to be.

Wan also gifts a fair amount of screen time – at two and a quarter hours, ‘The Conjuring 2’ has screen time to spare – to Maurice Grosse (Simon McBurney), who is the first outsider to witness the supernatural goings on at chez Hodgson, and debunker Anita Gregory (Franka Potente), who comes close to disproving the whole thing when she catches Janet faking poltergeist activity. This scene, chiming as it does with the Warrens’ talk show detractor at the start of the film, achieves something the filmmakers don’t even hint at in the original: the idea of fakery and exploitation for media interest/brief fame. Naturally, Wan and his co-writers Chad and Carey Hayes and David Leslie Johnson lose no time in declaring in favour of genuine supernatural shenanigans and hurrah the Warrens, but ‘The Conjuring 2’ contains a small seed of doubt that could be propagated in interesting ways in future instalments. (With the original making $318 million on a $20 million budget, and the sequel on course to top that on a still moderate $40 million budget, I’d say more ‘Conjuring’ movies are par for the course.)

The UK setting is very well done, once you get past the ‘London Calling’ montage. The streets and houses look authentic; interior design and the utilitarian reality of working class lives prompted memories of my childhood in the Seventies. (Though I doubt a low income family in 1977 would own a colour TV and certainly not a model with a remote control.) The performances are across-the-board good, often shading to very good. Wilson and Farmiga are already wearing the Warren personas as if they were the actors’ signature roles; O’Connor nails Peggy’s weariness, forever urging herself on to do what’s best for her kids, but utterly exhausted by the effort. Esposito and Wolfe deserve careers based on their work here.

If there’s a fault with ‘The Conjuring 2’ it’s that niggling sense of “not quite”-ness. The Crooked Man is not quite as scary as the hand-clap; O’Connor’s performance is not quite as gripping as Lili Taylor’s; the tension is not quite as unremitting; the final act not quite as focussed. The running time, at nearly 25 minutes longer than the original, is only part of the problem (there are never really any longueurs, and I’d rather have a genre film that makes time for character beats and thoughtful pauses than one that doesn’t); the over-use of effects work has something to answer for, as does the over-egged finale which almost tips it a parody of ‘The Exorcist’. But fortunately, Wan never entirely loses control of the material and ‘The Conjuring 2’ remains a commendable sequel with enough by way of its protagonists’ chemistry and their burgeoning case files to whet the appetite for ‘The Conjuring 3’.
Posted by Neil Fulwood at 10:09 PM

If you need your ex-girlfriend or ex-boyfriend to come crawling back to you on their knees (no matter why you broke up) you need to watch this video
right away...

(VIDEO) Have your ex CRAWLING back to you...?