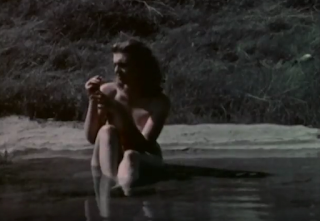 The most useful facility the wannabe connoisseur of trash movies can develop is pragmatism. Trash movies are made quickly, on the cheap, with the sole object of turning a fast buck on very little investment. Low-rent advertising is the only kind available to the purveyors of such stuff, and often the most effective advert for the product is its very title. One learns to take lurid titles at face value, and steels oneself for disappointment.

So it was that I settled down to watch the film under consideration today, and as I hit play I intoned a small prayer: “Lord grant me the serenity to know that a movie called ‘The Naked Witch’, made in 1961 with a fifty-nine minute and seven second run time, can’t possibly deliver on the dual promise of its title and will in fact probably be hard pressed to tick even one of those boxes. Amen.”

Serenity was granted and I watched ‘The Naked Witch’ and drank a bottle of Adnams Broadside and sat down to write and objective considered review, and never once did I feel compelled to hurl something across the room, or beat my fists against the screen while choking out the sob-drenched words, “You cheap lousy bastards, you called it ‘The Naked Witch’ and I didn’t feel a single tingle in the place where it’s nice to feel a tingle, and I want those fifty-nine minutes and seven seconds back, God damn you! God damn you all.”

And thus co-writer/directors Larry Buchanan and Claude Alexander escaped damnation and my blood pressure remained at a safe level. Now here we are, 270 words in, and you probably have a couple of questions. Taking an educated guess, the first is: When the hell you going to quit procrastinating and actually turn in a review? The second: Why do you keep harping on about the running time?

Well, I’ll tell ya. The running time of ‘The Naked Witch’ is fifty-three seconds shy of an hour. That’s pretty short for a feature. You’d expect an almost breathlessly pacy narrative, wouldn’t you? A narrative that puts its head down and runs hellbent for leather in the general direction of the end credits, tossing out – even allowing for our dialled-down expectations – at least a few nudity- and witchery-driven set pieces along the way. 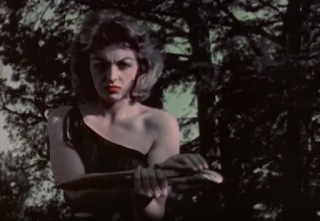 ‘The Naked Witch’ opens with an eight and a half minute prologue where a narrator with all the vocal nuance and intellectual charisma of a half-inflated whoopee cushion being suddenly sat on gives what I would normally describe as a lecture on the history of witchcraft. Except that lecture suggests the imparting of information; the marshalling of verifiable facts into a coherent overview; the education of the listener. Instead, what our droning voiceover artist does – as the camera roams interminably over a Brueghel canvas – is blether a load of purple prose to the effect that witches are scary and do weird supernatural shit. For eight and a half bastard minutes.

Then we get the opening credits, which include a quote from Shakespeare. Voiceover dude intones the quote in the same lifeless fashion. He also manages to misquote it. We’re over ten minutes into the film at this point. More than one-sixth of its running time has been expended and literally fucking nothing has happened.

Surely, with somewhere in the region of forty-eight minutes left to play with, Buchanan and Alexander are really going to pull out the stops and throw this motherfucker into overdrive.

We open on a sports car navigating the picturesque roads of Luckenback, Texas. Its driver is bland all-American nobody of the lumberyard school of acting. The credits have identified him as The Student. But since I don’t want to type The Student every time I refer to this pencilneck, I’ll call him Brock. He looks like a Brock. Plus it rhymes with cock.

Brock is on his way to a small town which is still a demographic stronghold of the German settlers who came to Texas in eighteen-something-or-other (the voiceover kicks in again almost the second the credits are done with), and whose history Brock is researching for … something. Term paper, assignment, whatever the 1961 equivalent of a blog was. I don’t know. Something. I’d picked up my phone and played a couple of moves on Words With Friends at this point. 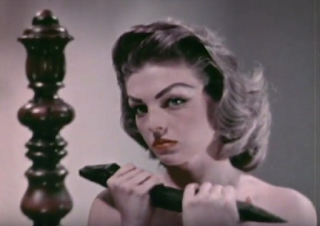 Anyway, to cut a long anti-narrative short, Brock fetches up in town, listens to the children’s choir sing the kind of song that was probably really popular in the Hitler Youth, finds lodgings, flirts with flaxen-haired mädchen Kirska (Jo Maryman) – one of the few characters the script can be bothered to gift with a name – but does nothing about it when she flounces into his bedroom in a diaphanous nightgown and asks if he wants to borrow her book on witchcraft. He says thanks, opens the door for her, and sits down to read the book. Smooth work, Brock, smooth fuckin’ work.

From the book, Brock learns that a woman wronged by one of Kirska’s ancestors was deemed a witch and executed as a means of silencing her accusations against said blackguard. Brock goes looking for the witch’s grave – which has a lot of loose topsoil for something dug in the 1600s – and inadvertently awakens her.

We are now thirty-four minutes into the film. The title character – yup, she’s billed as The Naked Witch (Libby Hall) – has only just shown up, and we’re left with twenty-five minutes and a few seconds to document her unholy vengeance, bring her into conflict with Brock, steer Kirska into a woman-in-peril scenario, and deliver a tense, exciting denouement. Oh, and throw in some nudity, too.

Granted, The Naked Witch (let’s call her Helga) gets straight to business by offing two of the townsfolk then going skinny-dipping. Meanwhile, Brock, realising what he’s done but not wanting to admit it to his hosts, does some research into the witch, first by visiting the library then by heading to some caves on the outskirts of town where the very comely librarian is convinced a purely theoretical witch, having been awakened from her deathless sleep, would logically go to ground. Heading towards the caves, Brock notices Helga skinny-dipping and having presumably rediscovered his libido stands and watches her for what feels like the combined running time of ‘Satantango’ and ‘Out 1’. She catches him watching, leads him to a cave, they make out a bit, she does a weird dance which is not only non-seductive but curiously emphasises how big her hands are, then they make out again. Brock falls asleep post-canoodling. We’re now four minutes from the end of the movie. 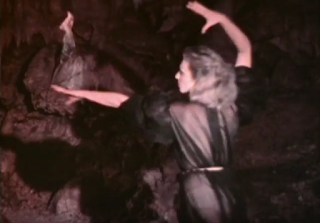 Four minutes for Helga to fixate on Kirska as the last victim in her campaign of retribution, Kirska to be lured into a perilous situation, and Brock to save the day. Hands up everyone who thinks the ending’s going to suck like a Dyson that’s just been given a flux capacitor upgrade?

That’ll be all of you, then.

Oh yeah, and that first question you had for me: what about the review? That was just it. Right there. Proof positive that the sleazier the title, the greater the need to manage one’s expectations. Now, does anyone have a copy of ‘Virgin Witch’ that I can borrow…?
Posted by Neil Fulwood at 8:51 PM

Want To Increase Your ClickBank Traffic And Commissions?