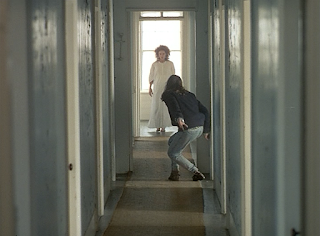 Um. You know how I said in my last review that I’d find a better film for the fifth offering in this year’s 13 For Halloween? Basically, I’m a lying bastard.

How big a piece of shit is ‘Witchcraft’? Let’s subject it to the cinematic equivalent of the Bristol stool chart: David Hasselhoff is in it, and he doesn’t give the worst performance.

But before we interrogate the cast to find out who is the guiltiest, a word on the title. The opening credits of the copy I watched identified it as ‘Witchcraft’, with the subtitle ‘Evil Encounters’ in brackets. IMDb has it as ‘Witchery’. It was released in the UK as ‘Ghosthouse 2’, and it is in fact an in-name sequel to ‘Ghosthouse’, which was the UK title of Umberto Lenzi’s ‘La Casa 3’; the original title of ‘Witchcraft’ is ‘La Casa 4’ and it trades down Lenzi quite spectacularly for Fabrizio Laurenti (directing under the pseudonym Martin Newlin).

What it isn’t is the Rob Spera film ‘Witchcraft’ (released the same year, just to confuse things). Rob Spera’s ‘Witchcraft’ is a wretched PoS that launched a ridiculously long-running franchise – sixteen instalments, the most recent completed last year – where T&A is the entire aesthetic raison d’être.

Ten minutes into Laurenti’s ‘Witchcraft’, I found myself wishing I was watching Spera’s ‘Witchcraft’ or any of its execrable sequels.

Laurenti’s ‘Witchcraft’ starts with a heavily pregnant young woman being chased along a beach by several pilgrim-looking types. They’re carrying farm implements and dressed like they made the best sartorial effort possible to audition for ‘The Crucible’ but were crucially let down by their lack of thespian talent. The pursuit continues as the girl dashes into a beachfront hotel of far more modern construction than the historical period suggested by the costumes, an observation quickly compounded by the appearance, on one wall, of a fuse box. But still, this is swiftly revealed as a dream sequence, so I guess we can let the anachronism slide. The girl runs down a long corridor, occasionally stopping to try one of the doors to either side. All are locked, and she yanks at the door knobs and slams her hand against the timber of the doors with increasing desperation. But if you watch the scene closely (i.e. with your eyes open and a minimum of one synapse firing in your brain), you’ll notice that all the doors have a key in the lock. Every. Single. One. Yeah, I know it’s a dream sequence, but foxtrot foxtrot sierra. 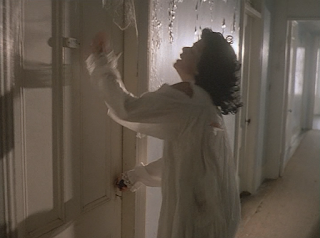 Awaking from this dream is the also-heavily-pregnant Jane Brooks (Linda Blair), and because her waters could break at any moment, it’s deemed appropriate that she accompany her privileged but crotchety parents Rose (Annie Ross) and Freddie (Robert Champagne) to view a piece of real estate on a Massachusetts island that requires a boat crossing in bad weather. And because the trip won’t at all be boring for someone of his age group, they take Jane’s considerably younger brother Tommy (Michael Manchester) as well. Also along for the trip are nymphomaniac sexpot architect Linda Sullivan (Catherine Hickland) and junior partner real estate agent Jerry Giordano (Rick Farnsworth). No prizes for guessing that the property they’re interested in requiring for development is the creepy hotel from Jane’s dream.

It takes an interminable half hour to get these individuals to the hotel. Early scenes have the Brookses engage Linda’s services before they even visit the realtor to request a viewing (!) – the real estate appointment is hilarious, Jerry greeting them as “Mr Brook, Mrs Brooks”, as if he’d barely glanced at the script, couldn’t quite remember their characters’ surname and went for both iterations as if no-one would notice – while Jane is almost killed by a falling girder (it’s being lifted by a crane and swung across a busy city street on the opposite side of which is a construction site: health and safety, much?) and Tommy has a strange encounter with a woman in black (Hildegard Knef, slumming it). And yes, Knef’s character is literally referred to as “the woman in black” in a “let’s hope Susan Hill’s lawyer’s don’t get wind of this” kind of way.

Could the woman in black possibly be connected with the creepy hotel? Well, since Jerry’s sales pitch includes this humdinger – “they’ve got a lot of legends about this island: witches and rainbows and shit” – it seems likely. Though why she tries to kill Jane with the falling girder before the scene even shifts to the island when her nefarious plans are entirely dependent on Jane being at the island, I couldn’t rightly say. 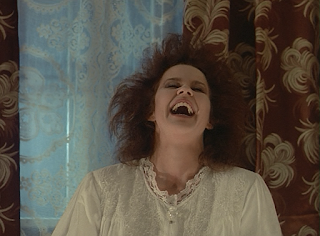 So: everyone converges at the hotel, supernatural shenanigans ensure their passage back to the mainland is scuppered, and a fearsome storm lashes the island. At least that’s what the script says. In fact, it gets so bad at one point that Jerry’s father (Tony Cammarata), attempting a rescue mission, is foiled at a sea crossing and instead reaches the island by means of a helicopter. That’s how stormy it is. That’s dangerous the waters are. Now here’s a screengrab of the moment the helicopter arrives at the island. In the middle of a storm, remember: 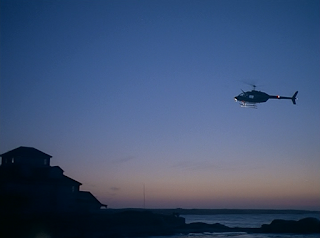 This is the beginning of a five minute sequence in which the characters in the hotel try to attract Jerry’s attention, the helicopter buggers off after they fail to do so, and Gary and Leslie run desperately out of the hotel as the doors (mysteriously locked when the chopper appears) spring open again. It’s an integrated sequence and pretty much staged in real time. It begins at twilight, cuts in some searchlight shots filmed in total darkness, and concludes in broad daylight.

Shots that don’t match and lapses in continuity are par for the course in cheapies of this ilk, but ‘Witchcraft’ seems to take a perverse delight in presenting the audience images that are blithely at odds with what’s in the script. Take this shot, which plays off a discussion about leaving the island because the tide’s going out: 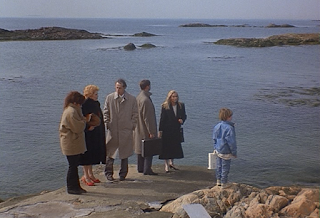 Boy, that tide sure has receded. You can barely see the water! 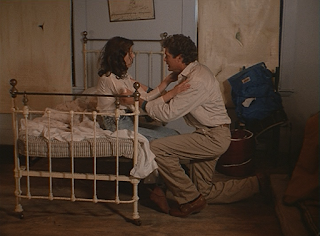 … where Gary tells a fully-dressed Linda, “Get dressed, we’ve got to leave immediately.”

Being charitable, though, these distractions did at least give me something to focus on other than the story itself, because – sweet baby Jesus in a mosh pit – ‘Witchcraft’ is pure 80s DTV boilerplate. There’s nothing remotely scary, creepy or even moderately tense on offer. Even the big scene where everyone desperately tries to get out of the house as the helicopter buzzes over the hotel, its searchlight not picking out a single sign of life, is robbed of any suspense due to Hasselhoff’s manic bounding from one side of the frame to the other, arms flailing and head jerking this way and that, as if hellbent on anyone else’s performance not being allowed to register.

Meanwhile, as characters fall one by one to the woman in black’s sinister machinations, Laurenti’s vision of the alternative-hotel they find themselves trapped in has all the raw visceral terror of a Duran Duran video. ‘Girls on Film’ maybe. Actually, the ‘Girls on Film’ video had more nudity than ‘Witchcraft’.

At 92 minutes, ‘Witchcraft’ is a long slog. One or two individual shots are competently composed, otherwise the overall standard of filmmaking is dire. The music doesn’t bear thinking of, let alone writing about. The script is garbage soaked in bilgewater. As for the performances, let’s bring this review back to where it started – Hasselhoff as not the worst in show – and end with the crimes against acting on display here. The verdicts are as follows:

Knef – career doldrums hamminess with enough self-deprecation that you know she’s not taking any of it seriously: charges dismissed.

Manchester – kid in a trashy film doing his best with what bad scriptwriters imagine is the way kids act: charges dismissed.

Hickland – daytime soap actress required to do nothing but toss her hair and given the thankless task of trying to convince in a love scene with the wettest lettuce in the cast: extenuating circumstances, non-custodial sentence. 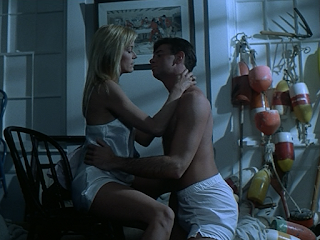 And finally our worst offender – Robert Champagne, a man whose surname is wonderfully at odds with his complete lack of sparkle onscreen. His performance isn’t just bad, it reaches a nadir – during one of the worst death scenes I’ve ever witnessed in all my years of watching trashy movies – where the film almost disappears into a black hole of Champagne’s single-handed creation. Guilty. Lock him up and throw away the key.
Posted by Neil Fulwood at 8:35 PM